The German-American midfielder used to fall asleep on his way to training when playing on his first youth team. Safe to say he doesn't do that with Reading. 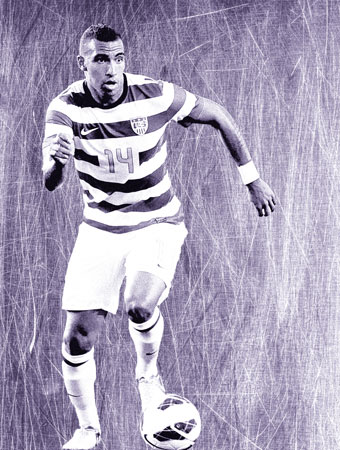 I often missed the training sessions when I played with my first team. My Mom drove me and it was a little distance, so I often fell asleep and didn’t wake up. And my Mom didn’t want to wake me up!

Growing up I always thought Pelé was the best player in the history of soccer. But at my team where I played in my youth (Karlsruhe) it was Thomas Hässler. A very skillful player.

It was very emotional, because my first game was in Miami. A city where I had just spent my vacation that summer. By the way, that [vacation] was the first time I had visited the U.S.

Discipline. You always need the will to improve yourself, look after your body—drink and eat healthy—and you need to have enough sleep!

No respect, no discipline, not being a team player.

I always try to go to my limits, believe in my abilities, never give up, and try to get better at everything I do. Plus, I have always listened to advice of my family.

Not one but pretty much everything. You can always improve everything you do.

Two players of my former team, where I managed to get professional—Ömer Toprak and Dennis Aogo.

To qualify for the World Cup 2014 in Brazil and to play in an international Cup with my club (eventually).

To have lost against Bayern Munich with 1:7 (last season).

Don’t keep thinking about mistakes during the game, because it will take away your concentration for the next situation.

I never really dealt with a different plan. Luckily it turned out.

Respect, passion, discipline, and fight for your teammates.