The 19-year-old California native is the third-youngest player on the latest ASN 100, and you'll never guess what his career backup plan is. 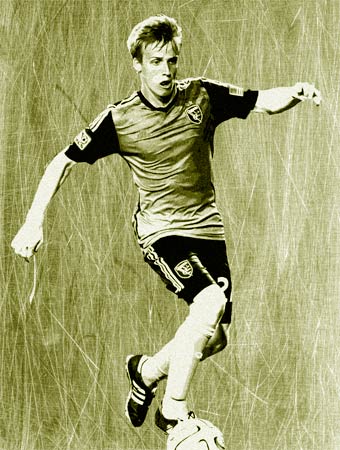 It had to have been when I was seven years old. My dad had a soccer camp in Wisconsin and it was one of those overnight camps. We spent a week over there practicing three times a day. It was just a cool experience being seven years old playing with 10- to-14-year-old players. It was great being able to play the game I love and have a good time hanging out with friends as well.

This one is an easy one for me—it was definitely Ronaldinho. I spent hours watching him on YouTube in the Joga Bonito videos.

It was surreal. It came at an opportune time for me. I was in great shape and it was an all-around great experience. In my debut I actually scored, so it couldn’t have gone any better than it did.

I admire ball control. That’s why I loved Ronaldinho so much because of his ability to be confident in tight spaces and to try things that a lot of people are too scared to try.

The key to my soccer success has been practice. Ever since I was five years old, I’ve been going to all these different soccer camps and have done a bunch of training on my own and it’s gotten me to where I am today.

It’s definitely my finishing. It’s great to have Wondo out here giving me some tips and I’m looking forward to the improvement I’ll get here.

I would say my dad (former U.S. international and 1983 NASL Rookie of the Year Gregg Thompson). He basically coached me all through my childhood. He’s been the head coach of every team I’ve been on for the most part and he’s provided me with insight that no one else has, so I’m grateful for that.

My closest friend has been my brother Tanner. I saw some tweet from Indiana University soccer that said it’s the first year we haven’t been playing on a team together since we were 13 years old, so Tanner has definitely had a huge impact on my improvement and it’s been awesome to have him with me every step of the way.

I would have to say scoring a goal for the under-20 national team. It’s either that or starting for an MLS team, so I’d say it’s a tie.

It happened in Dallas Cup four or five years ago. A team needed to win 8-0 against a team that we beat 4-1. It’s in Dallas Cup, so it’s supposed to be at a high level. Our whole team ended up going to the game and at halftime it was scoreless, so we thought we were through. In the second half they score eight goals and the last goal came off of a PK in the last two minutes. Next thing you know we’re out of the tournament when we were expecting to go through. That was just a huge disappointment.

Chris Wondolowski is one of them. His finishing ability is something that I’ve never played with before. Yannick Djalo and Matias Perez Garcia are skillful and have been fun to be around.

Kyle Beckerman was a pretty tough opponent, but just because they’re tough doesn’t mean I don’t enjoy going up against these guys. I would say Beckerman or Omar Gonzalez as being tough opponents. I’m grateful to be challenged and hope I get better from it.

I would be a backup dancer.

Playing for your country is the ultimate definition for success. It doesn’t get better than that.