The veteran defender reflects on his impressive career, including the toughest opponents he has faced and his greatest soccer achievements. 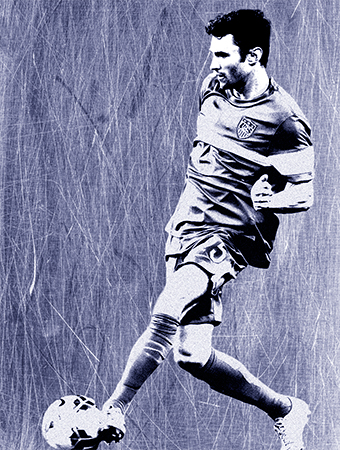 Playing at a rec field, I don’t even know how old I was, probably under six, under seven. I was out there playing with my sister, playing with kids that were older than me, just running around and getting the soccer ball.

Probably [Roberto] Baggio. I had a poster of him in my room growing up and watching the ’94 World cup, he was someone that always stood out.

It was the Gold Cup, in a group game—against Trinidad. It is just the pinnacle to represent your country. It is just a phenomenal experience and I take a lot of pride in it, not many guys get that opportunity. I just remember hoping the day would last forever and experiencing it. I can look back proudly and know that we won.

Probably the running aspect. When I see some guys that can absolutely run for 90 minutes completely and even more than that and they are not even tired. But also, the type of running that it is. It is always impressive to see some guys that are even fitter than most guys. Combining that obviously with the skill of soccer is pretty impressive.

The long throw-in, I can’t stand the long-throw in.

For me it is using my brain. I’m not the most physically gifted player. I have to make up with that with thinking ahead and reading the game and using my brain to my advantage.

My aerial ability can always improve. I’m not the biggest guy, but being able to get up there and win some headers and use my body a little more effectively.

I’ve been lucky to have a few really good coaches along the way. Stacey DeCastro back in Rhode Island was my coach for many, many years growing up and he instilled the love of the game for me. Tom Durkin down at IMG probably took my game to another level, especially tactically.

Rory Dowdell, we grew up playing soccer together for a long time. We went to boarding school together, so we had a really strong bond and we still do. Still playing today in the league are Stephen Keel and James Riley, they stood up in my wedding and they are still playing in MLS and we are good buddies.

Pick any of my first three MLS Cups.

Tomorrow is always another day. Whether you had the best day or the worst day, you’re still going to wake up tomorrow and life is still going to go on and you’ll still get to play soccer as a professional—so don’t dwell on it too much.

Shalrie Joseph is the first name that comes to mind, an absolute beast when I played with him in MLS. He is one of the best. Landon [Donovan] with the national team of course, he’s fantastic. I think I’ve played with some really good goalies, Matt Reis and Steve Clark, really impressive goalies.

I would say Landon [Donovan] is up there as well. In Champions League, we got to play against some really good players, Kwadwo Asamoah from Juventus was really good.

That’s a great question. I’ve been starting to think about it more. I don’t know, maybe some sort of sports medicine or sports physio, something in that field maybe.

Winning but with fair play, with style, with grace.