It's not often that a professional, especially a young one, credits a peer with helping them develop the most as a player. But that's just how important Benji Joya has been to Daniel Cuevas. 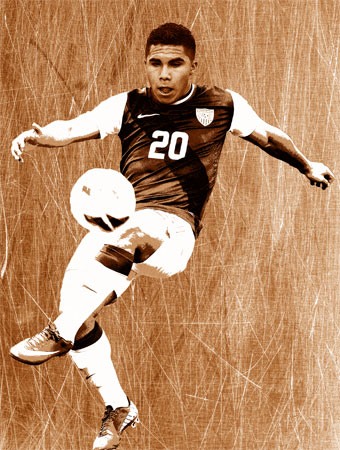 I used to go to the park with my Dad and watch him play [growing up in Sacramento]. I think I was around 5, 6 years old. I just remember listening to how the cleats sounded as we walked through the pavement on the way to the field. That’s a clear thing I have in my head.

My family in general, because my uncles and my Dad, they were all great players. So, I liked how each one of them had their different style and put it on the field. My Dad was a defender, and I had two, three uncles who were forwards. I liked how they played, their ways of scoring goals.

I was nervous. Just the fact that I couldn’t believe it that I was out there, and that I had gotten picked out of the nation for my age. It’s pretty amazing to be up there and actually getting to suit up and be able to play. So I was pretty nervous and excited and ready to get on the field and play with the team. With the level of players that you have [on the national team], it’s always fun to play.

A player’s ability to get unmarked and get a shot off quick. Just seeing players, how they move around the defender to get that space to get open enough to get that shot off.

When they’re lazy. Usually if you see it in a teammate, you’re tired or you’re maybe a goal down or two. They stop running, they don’t want to try, and just give up. I just don’t like seeing that, you know? It’s frustrating.

My right foot. Being more precise, and maybe shooting a bit stronger. It’s my weak side.

My teammate, Benji [Joya]. His motivation, his attitude on the field, is just contagious, and it helps me a lot to keep moving forward to not be stressed and frustrated.

Playing in the U-20 World Cup. That was pretty great. That was something I didn’t think I’d achieve so early.

Getting injured in the [semifinal] game versus Cuba and not being able to play in the final of the [World Cup] qualifiers. I felt like I was at a good point soccer-wise. The tournament was going good for me. It kept me out of the final and kept me from playing for my club team for two months. And that was basically the end of the season, so it put me to a side and slowed my whole process down, affected me a lot. I had a sprained ankle and a partially torn meniscus. It was the last minutes of that game: a bad tackle from behind. We had two days and then we would play the final. There’s no way I could recover for that.

Just to never give up. The game, at some points, is not going good for you at all. But then it always turns around. There’s always a good side to it.

That team that went to the World Cup. Coach Tab [Ramos] put a pretty good team out there. And I think that was the best team I’ve played with.

Those three teams in the World Cup: Spain, France, and Ghana. [Paul] Pogba from France, he was pretty good on the ball. I was just amazed at his touch, his control, and his vision on the field. It was impressive to see a player with that much quality at our age.

I don’t know. Something with technology. I’m really into technology and computers. I knew I wanted to play professional soccer. I had opportunities to go to school, but I told my manager ‘I want to play soccer’ and he got me the opportunity in Mexico. We tried out, and luckily it went well for us. And that’s when we signed. I was barely coming out of high school then.

Leaving it on the field, getting the result you want. Everybody feels that when they win a final. It’s all the hard work paying off.