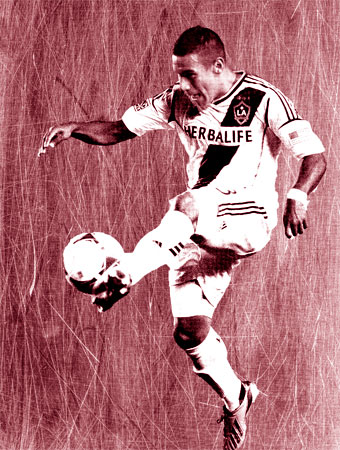 The thing I remember most is all the parents on the sideline screaming. All of us were on one side of the field. The other side was open. The ball would go to that other side and all of us would run to that side. I remember those days. Everyone was out there with a big smile on their face having fun. I think I was six or seven when I started.

Once I started to understand the game a little more from watching games and paying attention, I think it was Zidane. I admired him so much and I wanted to be like him. I tried to wear all the shoes he was wearing to try to look like him, too. I still look up to him.

I think it was Under-18 Milk Cup. That was my first camp tournament. I was a bit nervous. I didn't know what to expect. I think I knew two other players on the team. But it was a lot of fun and it gave me the chills when we were out there lined up for the national anthem. That was pretty special and something I'll never forget.

I think the passion and love they have for the game. They take the game to another level and try to make it better. They're not just out here for themselves or the money. They love playing. That's what I love to see in other players.

That's a tough question, because you can't say when they're too dirty. You've got to have some dirty players on your team. You have to have mean players and cocky players. Everyone brings their own flair. I wouldn't say I hate any particular quality about a soccer player.

My determination. I feel like every time I don't see any minutes on the field, I don't want to say it makes me mad. But it makes me more determined to come out here and train and go all out. That's what some players need. Some players are different, but I feel like that's what helps me out.

My game fitness and my finishing. I want to be quicker around the box so I can put away the ball. If I do those things, I think everything will come along with it.

My dad. Growing up, he was the one who encouraged me to play. Everything was about soccer. He was my coach growing up. He played in Mexico in local leagues. Some of the things I do now, I do it for him, too.

I'm good friends with a couple of guys with the U-20s who are in MLS now. They're friends with me because we've been through a good time together. On this team, Roman Hill and Jack McBean. Rafael Garcia tells me I'm like his little brother here. He kids around with me a lot.

I think being able to stay consistent with this team. Whenever someone leaves, I come in and step up. I feel like that's an achievement. I'm not satisfied. I want more. But at this point, I think that's a good achievement for me.

World Cup with the 20s. That was a big disappointment for me. I couldn't accept it. I wanted to go back in a time machine and do it over again.

I think last year with the first team and reserve team, those were the most talented groups of players I've ever played with. Being able to say I played with David Beckham and Robbie Keane and Landon Donovan, there's really not much more you need to say. It was a lot of fun to win the title with them.

Jamison Olave with the Red Bulls is a big strong guy. I'm a small dude, so I got pushed around a couple of times in New York. He was one of the toughest guys I've ever played against. I was definitely frustrated.

I can't see myself doing anything else, really. I'd probably be coaching, trying to stay involved with the sport.

When you can retire and look back and see all that you've done, you see that you have more achievements than disappointments. I want to be a role model for other people. That's very important to me.