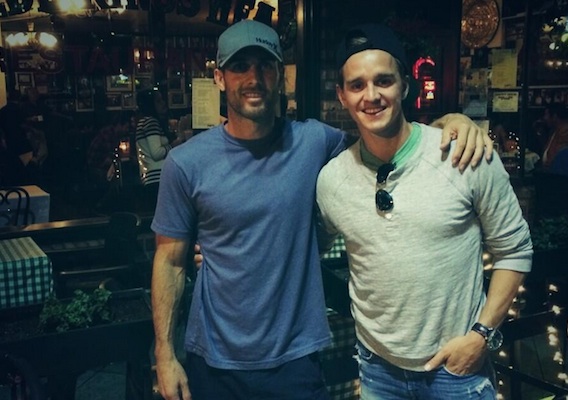 Awwwwww. Elsewhere, Maurice Edu hollers at his boy Tim Howard for his assist, Heath Pearce spits the truth, and AJ Soares and Kelyn Rowe take an ice bath together after training.
BY Jesse Yomtov Posted
October 06, 2013
4:23 PM
10. Maurice Edu: Once you’ve scored a goal as a keeper, assists mean nothing

Tim Howard with the assist! Haha my boy!

This red eye flight back home is instantly made better by the spicy chicken filet I just picked up from Wendy's. #friestoo

7. CJ Sapong: The benefits of being a professional athlete

6. Oguchi Onyewu: The last two people in the free world on BlackBerry?

5. Jay DeMerit: He says from Canada

Oh America, I thought you had graduated to your big boy pants, but apparently it's back to Huggies Pull-ups... #naughtystep

3. Juan Agudelo: As far as inspirational tweets go, this one is awesome

Whatever you do, do it so your signature isn't a signature anymore, make it an autograph. #success

Hate when u on a plane n the persn next to u yawns n dont cover their mouth, like I dont wanna inhale watever the hell u got goin on n there

1. Stu Holden: The hats really set this picture off