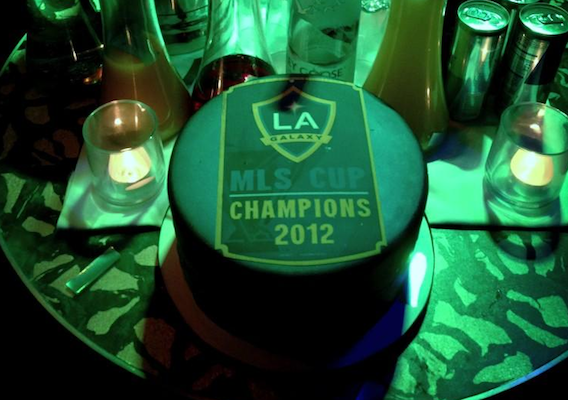 The Los Angeles Galaxy defender earns a well-deserved cake after a grueling season; a potential USMNT centerback joins the Twitting world; Beasley loves his BBMs.
BY Jesse Yomtov Posted
December 22, 2012
5:13 AM
10. Ike Opara—Appears we’ll have a new contender in the mix every week:

9. DaMarcus Beasley—But what if Klinsmann tries to BBM invites to national team camp?:

My bbm contacts are slowly diminishing! Im gonna have to get an iphone BUT only by default..

First words of my mom to me today "Are you working out? Because we all know you're not making out these days" #morningmomzinger #geeze

CHAPEL HILL. You beautiful, lovely town. Good to be back. Little brother is graduating, I have an awesome sweater, what a glorious weekend.

If you’re Tebow what do you do now? I kinda wish he wasn’t such a nice guy, would make me feel less bad for him. #ThisIsSomePoopOfTheBull

5. AJ DeLaGarza—This is too cool to even make snide comments about bottle service:

RT @delarusi: @jozyaltidore we have named our son to you. Jozy. Can we make a picture from you with him in your arms? --- anytime!

2. Nick Rimando—Like father, like son (Photos aren’t for the faint of heart):

My little dude got roughed up by a Rottweiler 2day. He's being a champ getting stitched. #chicksdigscars #yo instagr.am/p/TcNSGtqY5H/

1. Mix Diskerud/Taco Bell—Having personally failed to solicit a response from @TacoBell on multiple occasions, it’s hard not to be jealous of Mix:

@mixdiskerud Plot twist: There was no gold. Only Taco Bell.