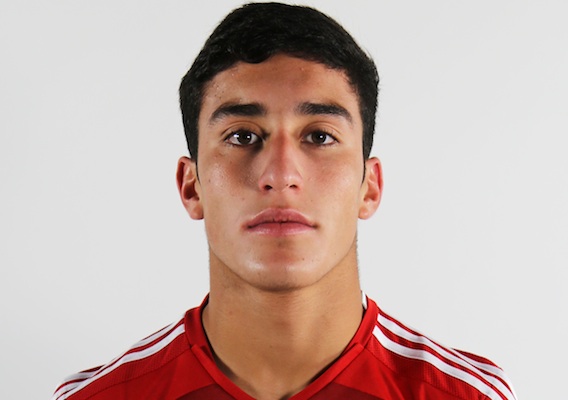 Zendejas, the youngest player in Major League Soccer, is hoping to parlay his first-team minutes with FC Dallas into a spot on the United States under-17 World Cup squad.
BY Brian Sciaretta Posted
August 27, 2015
11:15 AM

MAJOR LEAGUE SOCCER franchises have each adopted their own approach to building rosters. Some, like New York City FC and the Los Angeles Galaxy, heavy up on big-name foreign players. Others, including the New York Red Bulls, have built their teams on lesser-known but quality veterans.

FC Dallas, however, is squarely focused on developing young players. The latest beneficiary of head coach Oscar Pareja's youth movement is Alex Zendejas, 17, the youngest player in MLS. The El Paso, Texas, native signed a homegrown contract on October 12, 2014 and is beginning to see meaningful minutes with the Western Conference squad.

After missing most of the 2015 preseason due to his involvement in U-17 World Cup qualifying and being in U.S. Soccer’s residency program, Zendejas has worked his way into the first team. He made his professional debut on May 1, coming on as a late substitute in Dallas' 4-1 win over Houston. Six weeks later Zendejas made his first start in a 3-0 loss against Seattle.

Following the win over Houston, Pareja indicated that the inclusion of Zendejas into the first team was not hastily made decision by rather a reflection of the club’s philosophy.

“That's what our ownership aims for, and we're happy to send the message that this is for real—that we want to develop our players,” Pareja said after the game. “We take the risk. I'm 100% convinced to take the risks. These guys, I know they don't let us down, and what I saw today on the field was emotional.”

Zendejas recognizes that his game has improved quickly due to the increased responsibility. Unlike some top players , he is not one of the most physically developed players. As a result, he has had to rely on his technical ability to succeed.

“I’m not the biggest kid,” the five-foot-seven, 145-pound midfielder said. “I’ve had to adjust to the speed of play, the height, and the strength of everyone else. When I have the ball, I have to be smart with it. Little by little I am feeling more and more comfortable. My teammates are really helping out to accomplish that. I really appreciate them.  I would say that I’ve improved a lot.”

Born in 1998, Zendejas has never known a world without MLS. He grew up with the league and first began to play for FC Dallas youth teams when he was 13. Soon after he joined U.S. Soccer’s residency program and then signed for Dallas toward the end of his residency.

“[The FC Dallas Academy] really helped me improve in all of the little things," he said. "The great coaching staff I’ve had made it possible. When I was younger, I dreamed and I always wanted to be a professional player. FC Dallas gave me that opportunity and I really want to thank them for that. I want to give it my all to show them that I appreciate it. I want to be in this league.”

While MLS teams are still seeking to improve in youth development, Zendejas and other players of his age are the latest measuring stick in terms of progress. Fortunately for Zendejas, he has been with a club that is very vocal and outspoken about the need to give young players minutes and show what they can do.

Along the way it has played not only Zendejas, but also U.S. U-20 midfielder Kellyn Acosta, U.S. U-23 defender Walker Zimmerman, Mexican youth goalkeeper Jesse Gonzalez, and teenager forward Coy Craft. Last season Pareja named Matt Hedges as captain—the youngest man wearing the armband in MLS and the team also boasted the 2014 rookie of the year in Tesho Akindele.

“I will say this over and over,” Pareja said. “I believe in the talent in America. I believe we have tremendous players in this country—they just need an opportunity. For me to see them go and perform and be part of such a great event is a pride for us. America has great players and we have to believe in that.”

Despite a recent three-game losing streak, Dallas is still in strong position in the Western Conference playoff race, sitting in fifth place but having played fewer games than most teams ahead of it. To be able to compete in the superior Western Conference, FC Dallas will have to compete with veteran teams like Vancouver, Los Angeles, Kansas City, and Seattle.

But the playoff battle and FC Dallas is only part of the story for Zendejas. In addition to his potential involvement in the MLS playoffs, Zendejas will likely be part of the U.S. U-17 team that will face Nigeria, Croatia, and the host country, Chile, when the tournament begins on October 17.

“I think he’s one of the most important guys actually,” Barbir said. “He gives us all that intensity and all that energy in the game. It’s very important to have someone like that on the team and I’ve never met anyone like that ever. He’s grown dramatically. It’s great to see that.

"He used to be so quiet when I first met him on the pitch. Now he’s like the leader. He’s one of the main guys.”

Emboldened by his time in Major League Soccer, Zendejas is eager to step into the U-17 World Cup spotlight.

“I feel confident with this team and we’ve been together a really long time,” Zendejas said. “We know each other very well and I believe we can compete with all the other teams in the world.”