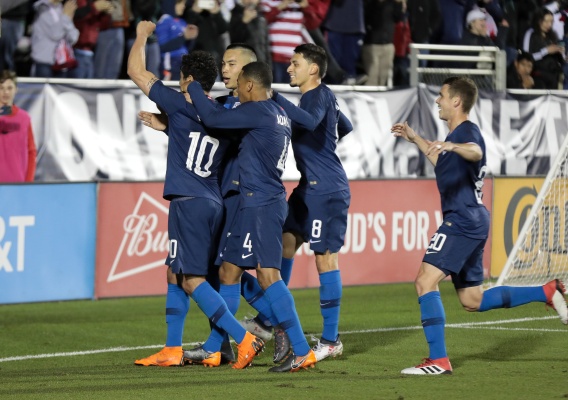 Young Yanks step up to down Paraguay 1-0 in Cary

With one of its youngest rosters in modern history, the United States national team defeated Paraguay 1-0 in North Carolina. The game severed as the latest step in the team's rebuilding phase and while it wasn't perfect, there were far more positives to take away.
BY Blake Thomsen Posted
March 27, 2018
5:55 AM
CARY - N.C. In front of a sellout crowd of 9,895 at Sahlen’s Stadium, the U.S. grinded out a 1-0 win over Paraguay. The game lacked big chances, but the U.S. displayed impressive energy and made the most of their best scoring opportunity, with Bobby Wood scoring a penalty in the 45th minute.

The U.S. was on the front foot early, pinning Paraguay in their own half with confident possession play. But for the first fifteen minutes, the possession didn’t threaten a well-drilled Paraguay side.

That changed in the 16th minute, when terrific passing in the box led to a huge U.S. chance. Darlington Nagbe cut back a cross from the byline, and Kenny Saief nearly gave the Americans the lead, but his left-footed shot was blocked by a sliding defender and then cleared off the line.

Paraguay responded with a pair of headed efforts on target in the 27th and 29th minute, but U.S. goalkeeper Zack Steffen comfortably saved both headers. The saves were his only significant first-half action, as the U.S. center back pairing of Cameron Carter-Vickers and Matt Miazga held strong against the threat of Atlanta United attacker Miguel Almiron and the rest of the Paraguayan front line.

“I thought defensively we were pretty rock solid," U.S. interim coach Dave Sarachan said. "[The center backs] were outstanding. I thought Carter-Vickers didn’t put a foot wrong, nor did Matt in my opinion. Obviously they know one another well. I thought they played with confidence, with physicality. It was a pairing that looked like they’d been there before.”

The half looked like it was going to end with a whimper, as the U.S. lost much of its attacking rhythm from the 30th minute onward.

But a touch of class from Toronto FC midfielder Marky Delgado dramatically changed the complexion of the game in the 43rd minute.

As the U.S. won possession back from Paraguay, Delgado played a superb first-time through ball to a surging Tyler Adams. The New York Red Bulls midfielder raced beyond the Paraguay backline and found himself one-on-one with Paraguay goalkeeper Roberto Fernandez.

Adams rounded Fernandez and was tripped with the goal gaping. He drew a yellow card on Fernandez and a penalty for the U.S., which Bobby Wood coolly converted to give the U.S. a mostly deserved lead.

“Marky is a good passer," Sarachan said. "He’s a connector and he’s got good feet. Tyler has an incredible engine. His feet were good not great, but he still got it done. The combination of a good passer and a guy that can run can be deadly.”

Paraguay nearly scored on a set piece in first-half stoppage time, but the U.S. was able to clear and head into the break with the lead.

The Americans picked up where they left off at the start of the second half, earning a series of corners and free kicks in dangerous positions. But they struggled to turn the set pieces into scoring chances, as Paraguay held firm under the aerial pressure.

The game sprung into life in the 55th minute when Delgado was upended by a studs-up challenge. Players from both teams engaged in some light pushing and shoving, with Miazga and DeAndre Yedlin particularly vocal in support of Delgado.

The game started to lose its rhythm as the second half progressed, with neither team creating many chances. In the 67th minute, Miazga and Carter-Vickers had their only shaky moment of the match, as they struggled to cope with a high press from Paraguay.

Paraguay won the ball in a dangerous area and the move ended with a fierce Almiron shot being blocked behind for a corner.

“I think Steffen forced the play out of the back," Sarchan explained. "As a goalkeeper, there’s times you gotta step on it and slow it down. I don’t think Matt was ready for it. It was just a mistake, and Steffen realized it.”

Paraguay next threatened in the 75th minute, when substitute Hernan Perez rose above Jorge Villafana at the back post and headed across goal. Steffen was well beaten but Perez’s header rolled wide of the far post.

Andrija Novakovich came on for his USMNT debut two minutes later, but he struggled to make an impact on an out-of-sorts U.S. attack in his brief cameo.

In the 81st minute, FC Copenhagen forward Federico Santander drew a questionable foul on Carter-Vickers outside of the area. Santander stepped up to take the free kick and saw his well-hit free kick blocked in the wall by Miazga, and the U.S. was able to clear the ensuing loose ball relatively comfortably.

U.S. fans got what they were looking for in the 86th minute, albeit 20 minutes later than many would have preferred, when 18-year-old PSG winger Tim Weah made his debut, replacing Delgado. His entrance was a memorable moment, with the sellout crowd in Cary greeting his arrival with a big cheer.

Weah was busy in his brief cameo. He drew a free kick in a promising area in the 89th minute, but Nagbe was not able to trouble Fernandez in the Paraguay goal.

“Weah was nervous," Sarachan said. "He was really nervous. He should have been nervous. This was a good debut for him.”

Then, in stoppage time, Weah won the ball in midfield and released Novakovich with a well-weighted through ball. Novakovich raced toward goal but was unable to cap his debut with a memorable goal, as Fernandez saved his left-footed effort.

Steffen saved a Paraguay free kick with the last kick of the match, sealing the win for the Americans.

“These games are valuable in player development," Sarachan said. "When we start getting into the next round of qualifiers, guys like tonight are gonna be valuabe. Inconsisent referees, players diving… That’s what their world [in qualifying] is gonna be like.”