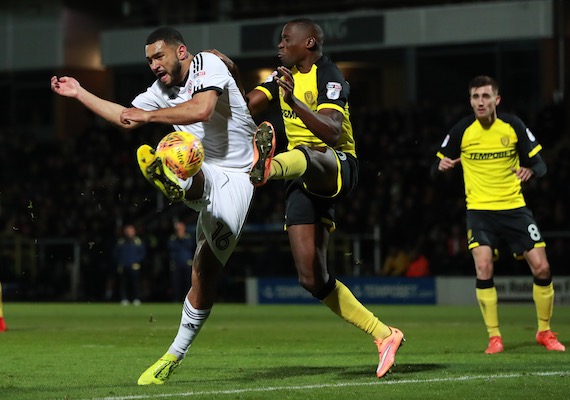 This was a near-perfect weekend abroad as young players completely stood out. When going through the list of impressive performances, it was nearly impossible to squeeze it into one column.

Keaton Parks, 20, has toiled away at the lower levels in Portugal over the first few years of his career but now appears to be knocking on the doors of some serious soccer. Over the summer the American signed for Benfica to play for the club’s second team but after impressing there he was called up to the first team for a cup matchup against Victoria Setubal.

A tall central midfielder, Parks was subbed into the game in the 69th minute and played very well. In the 80th minute he contributed in the buildup to Filip Krovinovi?'s goal when he was the first to send the ball dangerously into the box.

Continuing to feature will be tough for Parks but the upside of doing so would be enormous. You can add Parks into the mix of a long list of young central midfielders that includes Weston McKennie, Tyler Adams, Jonathan Gonzalez, Luca de la Torre, Kellyn Acosta, and Cristian Roldan.

Carter-Vickers gets an assist

Most serious soccer supporters now know how well Cameron Carter-Vickers, 19, is doing on loan for the Sheffield United. He has been a rock for United, playing in a three-man backline and lately he has been making key passes out of the back that have resulted in opportunities.

Shortly before the international break, Carter-Vickers notched his first assist in a 4-1 win over Hull City when he burst down the right side and fired in a perfect cross.

On Friday, Carter-Vickers hit a splendid through-ball in a 3-1 away win over Burton Albion for his second assist of the season. With the win Sheffield United remained in second place in the English Championship. After a very strong second half in his debut for the United States national team in a 1-1 draw with Portugal, it has been a great month for the English-born Carter-Vickers.

What a great pass from Cameron Carter-Vickers for his assist today for Sheffield United. #USMNT pic.twitter.com/DT4m0VdeR2

The ideal situation now for Carter-Vickers would be featuring for Sheffield United the rest of the season and helping the club to promotion and then work out a permanent transfer from Tottenham.

After scoring a goal in his first cap for the United States on Tuesday, Weston McKennie kept the ball rolling with another strong full-90 performance for Schalke on Sunday in a 2-0 win over Hamburg. With that win, Schalke jumped to second place in the Bundesliga.

McKennie, 19, seems to be talking a more offensive role within Schalke in recent games as opposed to deeper roles in the midfield. On Sunday, he was in a more advanced position and took three shots on goal while still managing 60 touches over 90 minutes. It was a different and more exciting role for the youngster.

On the flip side, Bobby Wood played the final 21 minutes for Hamburg. The Hawaiian missed the international break with lingering knee issues which must surely be of concern for Hamburg and U.S. national team fans as this has been a problem dating back to 2011. But in addition to the knee problems, Wood is completely devoid of a midfield that can play the ball to him in dangerous positions. The end result is yet another relegation battle ahead for HSV.

Another 19-year-old, Luca de la Torre, joined Fulham as a very young player in 2013 but so far he has seen limited minutes for the first team. Last year he played in a League Cup game and earlier this month he played in stoppage time for his Championship debut.

On Saturday, de la Torre played his first meaningful Championship minutes when he came on in the 63rd minute of a 1-1 draw against Derby County at Craven Cottage. In his 27 minutes on the field the San Diego native was very active with 25 touches and a nearly 90% pass accuracy rate.

After advancing to the Championship playoff places last season, Fulham has disappointed this year as it is winless in six games and sits in 17th place. But amid the struggles lies an opportunity for de la Torre to get more minutes in the weeks ahead.

As a veteran of the U-17 and U-20 World Cups, de la Torre is a very promising prospect and looks set to finally get going with his professional career.

Moore gets first start for Levante

The 2015 U-20 World Cup veteran Shaq Moore has been making inroads lately with Levante of La Liga. After appearances off the bench in both cup and league play, Moore finally got his first start on Sunday when Levante visited Las Palmas.

Moore, 21, ended up going the distance in Levante's 2-0 victory and was strong throughout his full-90 effort. The Georgia native was active with 53 touches from the right back position and nearly had an assist in the first half. Defensively he had three interceptions and four clearances. With the win, Levante moved into 11th place. Next Saturday a big challenge awaits when it hosts fourth-place Atletico Madrid.

Gonzalez stands out in Monterrey win

On Saturday, Jonathan Gonzalez got the start for Liga MX leaders Monterrey in a massive game against second place Tigres. On Wednesday, the California native was subbed out of Monterrey’s Copa MX semifinal shootout win over Club America with an injury. But on Saturday, Gonzalez was able to go the distance.

Gonzalez, 18, ended up having one of his best games of the season in what has been a breakout year for the youngster. In the end, Monterrey won the game 2-0 to clinch the first overall spot in Liga MX in the regular season.

John Brooks is not a young player anymore, but at 24 he is about to enter his prime. Along with DeAndre Yedlin, Brooks should be emerging as a leader of the U.S. team given his extended experience in a top league—along with having played in the 2014 World Cup.

Brooks has been injured for most of this season but is on his way back. He played well for the United States on Tuesday against Portugal and on Saturday he was strong for Wolfsburg in a 3-1 win over Freiburg. On the heels of four straight draws, Wolfsburg got back on track but are still in 13th place in the Bundesliga.

Brooks was sharp all around with 73 touches and a 92% pass completion rate. He was credited with six clearances and four interceptions. If Wolfsburg is going to push into the top half of the standings, having Brooks back will be a huge bonus.

Amon wins penalty off the bench

Looking ahead to the 2019 U-20 national team, South Carolina native Jonathan Amon, 18, is making inroads in the Danish Superliga with third place Nordsjaelland. The left winger has seen his playing time increase lately and he came off the bench on Saturday with Nordsjaelland down 3-0 against first place Brondby.

Nordsjaelland ended up losing 4-2 but Amon was solid where he drew a penalty which was converted and was also a handful for Brondby to defend. As Nordsjaelland look to return to European play, Amon’s status will be one to watch.

Despite massive successes for Americans abroad, several players who had rough weekends.

Ethan Horvath had a blunder with the U.S. team midweek but his situation at Club Brugge is also on shaky ground as he has let in some soft goals the past month for the league-leading team. On Sunday he was benched in a game where Brugge prevailed 3-0 Waasland-Beveren. Horvath’s replacement, Guillaume Hubert, is just 23 years old. On the national team level, Horvath could get pushed out by Columbus Crew standout Zack Steffen or even Bill Hamid who just made a move to Denmark.

Haji Wright’s loan to Sandhausen started off well with a quick goal but he quickly lost his starting spot. Now he’s struggling to get on the field. He has 10 appearances so far for just 459 minutes and one goal. He did not play on Saturday in a 2-1 win over Darmstadt

2017 U-20 World Cup forward Emmanuel Sabbi earned his first start for Hobro in the Danish Superliga but did not impress and was pulled at halftime with the game scoreless. Hobro ended up winning 1-0 with a stoppage time goal.

Meanwhile, Matt Miazga is a regular starter for Vitesse in the Eredivisie and is in the mix to become a starter for the United States national team. But the New Jersey native will probably want to forget this weekend when he went the full 90 in a 4-2 loss to Groningen.

Expectations for Green and Rubin?

Even with some players abroad struggling, two athletes stand out for all the wrong reasons. Julian Green and Rubio Rubin once carried high expectations among American coaches and fans. It was thought that both would be a huge part of the future. Jurgen Klinsmann brought Green to the 2014 World Cup and praised Rubin’s potential when he was a starter for FC Utrecht.

This weekend was a good glimpse as to how far both have fallen.

Green is now on loan at Greuther Furth which sits in 17th place in the 18-team 2.Bundesliga. When he was sent there on loan from Stuttgart, Furth did not even have a coach. That alone questions the seriousness of this loan as typically players are brought into a club that has a specific need. Furth had no direction at the time Green arrived. Now Green is struggling to even get on the field and was an unused substitute on Saturday's 1-1 draw against Bochum.

Meanwhile Rubio Rubin’s career has been in a tailspin. After fading away at Utrecht, he joined Silkeborg in Demark where he couldn’t see the field. Earlier this year, he moved to Stabaek in Norway which is very far below the level expected of him. Since joining, he has been a seldom-used bench option. On Sunday he played the final three minutes of Stabaek’s 1-1 draw with Sogndal. With just one game remaining in the season, Stabaek will finish midtable. Rubin has made just seven substitute appearances for a paltry 109 minutes and no goals.

Rubin and Green are in bad places but still have time to resurrect their careers. American fans should wish them well but also realize that while the next generation looks promising so far, things can go bad quickly.