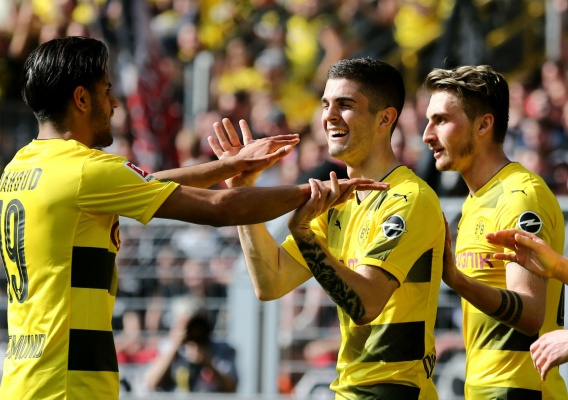 The number of American players playing important games right now is impressive as Weston McKennie and Christian Pulisic both might feature in the Champions League next year. Tim Ream and Andrija Novakovich are pushing for promotion. Also, Kenny Saief and Timmy Chandler could land a Europa spot.
BY Brian Sciaretta Posted
April 09, 2018
1:00 PM
WITH MONDAY'S GAMES now in the history books, so wraps up the weekend abroad for Americans. Overall, it wasn’t a banner year but still there was some nice progress shown by some younger Yanks who will feature for the national team in the cycle ahead.

Most impressively, however, is the number of American players pushing for Champions League, European, and promotional spots at the moment.


Borussia Dortmund is in a race to secure a Champions League spot next year and Sunday’s 3-0 win over Stuttgart was a boost. Christian Pulisic scored the opening goal on a “shot” which was probably intended as a cross.

It wasn’t a dominant performance from Dortmund but the result was ideal as the club moved into third place in the Bundesliga behind secured champions Bayern Munich and Schalke. Pulisic, however, was perhaps the best player on the field for Dortmund as he also helped set up the club’s third goal.


Dallas native Weston McKennie, 19, has been injured for most of 2018 and that forced him to miss the U.S. national team’s recent friendly against Paraguay. On Saturday McKennie returned for Schalke and was instrumental in an equalizing goal against relegation battling Hamburg – who were without U.S. national team forward Bobby Wood.

McKennie came on at the start of the second half with the score 1-1. After Hamburg took a 2-1 lead in the 52nd minute, McKennie helped orchestrate a goal from Guido Burgstaller in the 63rd to even the game at 2-2. On the play, McKennie took a throw-in and send a wonderful thru-ball into the box for Burgstaller. The first shot was saved but the rebound wasn’t.


Unfortunately for Schalke, Hamburg pulled the upset with a late winner. Schalke still remain in second place but blew a chance to start running away with a Champions League spot.

Yedlin and Newcastle into 10th


But many measures, a top 10 finish in the Premier League would be solid for Newcastle United and Saturday’s 2-1 win over Leicester pushed the club into 10th place.

DeAndre Yedlin continues to be a mainstay for Newcastle. In the win, Yedlin was once again steady defensively and allowed little from his flank over the course of 90 minutes. He continues to need to find a way to utilize his speed to push into the attack if he wants to make it to a higher level. But starting every game for a big club like Newcastle which is trying to return to being one of England’s better clubs is not a bad place for the Seattle native to be.


United States national team forward Andrija Novakovich is trying to carry Telstar to an unthinkable promotion to the Eredivisie. If Telstar get there, the Wisconsin-native’s goal on Monday will have played a huge role.

With Emmen and Telstar neck and neck in the standings, Novakovich struck in the 41st minute to give Testar a 3-1 lead on the road. In the end, Telstar would win 3-2. How big was the goal?


Unless there's a mathematically miracle, Telstar have a 2nd round playoff spot following a 3-2 win over Emmen. That's a tweet i'd never thought I'd write. #emmtel

There were a lot of rough results to go around for Americans abroad.

Matt Miazga and Vitesse lost to NAC Breda 1-0 and his national team teammate Cameron Carter-Vickers was no better as Ipswich Town lost to Brentford by an identical score. Antonee Robinson returned to the starting lineup for Bolton but was on the wrong end of a 3-0 decision to Derby County.

Lynden Gooch continued to start for Sunderland but with his team needing wins to have a prayer at avoiding relegation, 72nd minute Leeds United goal forced a 1-1 draw and made Sunderland’s task of survival even more difficult. On the other hand, all Tim Ream and Fulham do is win. Undefeated since December, a 1-0 win on Saturday over Sheffield Wednesday puts te Cottagers into a push for an automatic promotional spot.

One-time U.S. national team forward Andrew Wooten returned from an injury to play for Sandhausen on Saturday. He went up against Julian Green and Greuther Furth in the 2.Bundesliga. Neither forward scored in a 0-0 draw. Haji Wright continues to be MIA for Sandhausen.

In Belgium, Kenny Saief and Anderlecht returned to winning ways with a 2-1 result over Sporting Charleroi. Erik Palmer-Brown, however, did not feature for Kortrijk.

In Mexico, there was positive news for Jorge Villafana who started for Santos Laguna in a 3-0 win over Queretaro FC. That was enough for his club to remain in third place. Elsewhere south of the border, Ventura Alvarado was given a red card for Necaxa, Landon Donovan did not play for Club Leon, and Rubio Rubin was a second half sub in a 2-2 draw against Atlas.