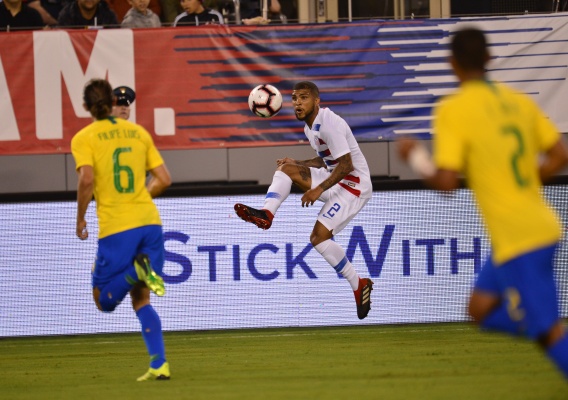 The United States national team was on the wrong end of a 2-0 decision to Brazil. But with friendlies, it isn't about the result, it's about what the team took from the experience. ASN's Brian Sciaretta is here to break it down.
BY Brian Sciaretta Posted
September 07, 2018
10:30 AM
THE UNITED STATES national team was defeated by a very strong Brazil team 2-0 in New Jersey where it conceded two first half goals and did not muster much attack from the run of play.

Interim head coach Dave Sarachan predictably named a younger starting XI that featured Weston McKennie, Tyler Adams in central midfield. Julian Green and Paul Arriola on the wings. Wil Trapp in the defensive midfield position and Bobby Wood up top. The backline had Antonee Robinson and DeAndre Yedlin at fullbacks with John Brooks and Matt Miazga in the middle. Zack Steffen was in goal.

Brazil frequently attacked the U.S. team down the flanks and scored first when Juventus winger Douglas Costa beat Antonee Robinson and sent a perfect pass that set up Firmino for an easy finish. Then before the half, Neymar converted a penalty on a harsh decision when it was ruled Wil Trapp committed a foul in the box.

The U.S. team played hard but Brazil was clearly better and deserved the win.

Brazil was in control


The young U.S. team tried to go at Brazil early but Brazil quickly got the game under control. The difference between the teams couldn’t be seen on the scoreboard or in the stats, but rather when watching the game Brazil was always calm and never forced to play an intense game.

The U.S. team, worked hard and certainly played with an admirable effort. But it was not able to put Brazil into a position where it had to raise its game.

Robinson was the target


It was expected that Antonee Robinson would get the start for the U.S. team at left back as he played well against France in June and is off to a strong start this season where he is on loan from Everton.

But Brazil went after Robinson early and often. On the first goal, Robinson was beaten for speed – despite the fact he is one of the fastest players on the U.S. team. But that wasn’t an isolated incident as Brazil frequently went down his side.

After the game, Sarachan spoke highly of Robinson which is fitting to show confidence in a young player.

Robinson should continue to be an important part of the U.S. team but this was a definite learning lesson about the elite level of international play.


The United States did not generate much in the attack against Brazil – which isn’t surprising.

The lack of in-form forwards or creative No. 10 midfielders in the player pool is a big concern. Christian Pulisic is injured at the moment, but the U.S. team needs a better “Plan B” when the Hershey native is not in the lineup. Tyler Adams and Weston McKennie had nice moments in the game but neither are the creative forces at their respective clubs.

One such options could be to play down the flanks more, but a big question in this game is why Sarachan did not opt for a formation with three central defenders and two wing backs. That would have given Yedlin and Robinson more defensive cover and allowed them to press further down into the attack. That worked well against France in June.


The fact that the United States lost to Brazil tonight doesn’t really matter. If the U.S. team had pulled off the upset, it wouldn’t have mattered either. The only thing that matters is whether this game helps the team and its players for the future. Will tonight’s game offer anything that will help it win games next year and moving forward in the cycle.

After the failure to qualify for the World Cup last year, there was a need to move the team in a younger direction. Younger players will make mistakes and will be inconsistent but over a long period of time, it could pay dividends. But patience is required.

It is impossible to quantify but it wouldn’t be surprising if tonight, along with the other friendlies this year against top competition, helped lay a foundation for these players to build their international career. The only way players can know what is expected to play at high level is to play against high level.

Matt Miazga and John Brooks played well in central defense and seem to be ready to compete at a high level. Others like McKennie and Adams showed positive glimpses.

Whoever is the next coach of the U.S. team will inherit a young core that still needs a lot of work but could eventually grow into being a solid national team. Unfortunately, getting to that point will see tough lessons like tonight.