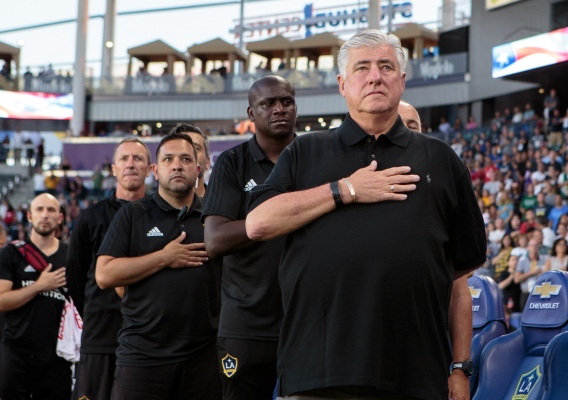 There was a lot going in American soccer away from the U.S. national team. The U.S. U-20s and U-19s were in action, a lot of young players played in MLS, Sigi Schmid's parts ways with the Galaxy, and Sargent scored again. Brian Sciaretta is here with the latest
BY Brian Sciaretta Posted
September 10, 2018
4:00 AM
WHILE MOST of the activity during the international break surrounds the United States national team, there was plenty of news going on including several games in MLS and among U.S. youth national teams.

Here are some important news items


With U-20 World Cup qualifying just around the bend, the United States U-19 and U-20 teams are in a tournament in Florida with Venezuela’s and Jamaica’s U-20 teams.

On Friday, the U-19 team drew Venezuela 2-2 with goals from Blain Ferri and Taylor Booth. The United States U-20 team defeated Jamaica 3-1 with two goals from Sebastian Soto and one from Ayo Akinola.

On Sunday, however, the U.S U-19s defeated the U-20 team 1-0 on a goal from Ulysses Lanez who has been a standout performer in recent camps at various age groups for the United States. While it is never good to see the U-20s lose a game like this so close to qualifying, the good news is that Llanez could easily be added to the U.S. roster. It is also tough to read too much into a game where there is heavy squad rotation.

On Tuesday, the final round of games will take place where the U-20 team will face Venezuela and the U-19 team will take on Jamaica.

MLS gets younger over the weekend


There were three games over the weekend in MLS as New York City and DC United played to a 1-1 draw which is a disappointing result for both teams. Portland defeated Colorado 2-0 and Sporting Kansas City defeated a woeful Orlando City 1-0.

But with just three games on the docket due to the international break, it was a very good weekend for league in terms of playing young American players.

Gianluca Busio, 16, is a lock for the U.S. U-17 national team this cycle and he came into the game for Kansas City in the 83rd minute of its win.

Colorado midfielder Cole Bassett, 17, made his professional debut when he came on in the 73rd minute of the 2-0 loss. It was only month ago that he signed his homegrown contract with the club.

One of that goals scored by Portland came from Jeremy Ebobisse, 21, who was a member of the 2017 United States U-20 World Cup team. He also had a goal disallowed for a very close offside call earlier in the game. If Ebobisse can get going, he can certainly feature for the U.S. U-23 team as it builds towards qualifying.


Sigi Schmid is one of the icons of the early days of MLS but has struggled in recent years. He eventually fell out of favor with a struggling Seattle team and this year’s Galaxy team is a mess.

Taylor Twellman reported the news that Schmid has resigned as the Galaxy boss and also said Dominic Kinnear would replace Schmid on an interim basis. Kinnear, like Schmid, was a successful coach in a different era of MLS.

Schmid’s team was a total mess and Schmid’s time as a coach might now be done. The league is far different now than it was during his best days as a coach. The chances that Kinnear will lead a turnaround are also small.

As an organization, the Galaxy have been a mess for several years now. Aside from high-priced designated players, that core is ridiculously thin and there has been no success promoting young players from what should be one of the country’s best academies.

Schmid is gone but will others follow? Deeper changes are needed.


On Saturday, it was announced that John Brooks was leaving the USMNT camp and returning to Germany. It was also stated that this move was preplanned before camp started.

On Monday, it was also announced that Paul Arriola would return to DC United. This also makes sense in that DC United is in an uphill but achievable race to make the playoffs and has a game on Wendesday.

With the loss of Sebastian Lletget, Paul Arriola, and John Brooks, the USMNT roster stands at 23 for the game against Mexico.

Hines-Ike wins player of the month

Colorado’s Brendan Hines-Ike was named Kortrijk’s player of the month for his play in the first month of the Belgian season. The defender joined the team over the summer from Orebro in Sweden and was the highest transfer every paid by Kortrijk.

Josh Sargent has been progressing nicely within the Werder Bremen system where he has five goals in seven games for the U-23 team. On Saturday he got a chance to play for the club’s depleted first team in a friendly against SV Meppen of the 3.Liga.

Sargent, 18, is boosting his case for an eventual transition to the Bundesliga but it still might take some time. Werder’s first team is playing well at the moment and there is plenty of attacking talent on that team but at this rate, Sargent should be expected to get a chance this season.

Typically, American players in Germany have taken advantage of the friendlies during the Bundesliga winter break to make their move (Pulisic, Chandler, Williams, etc). Perhaps Sargent can do the same then.