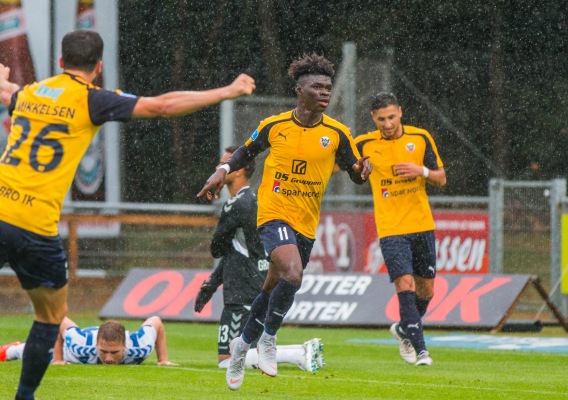 All eyes will be on DeAndre Yedlin early this week who is underoing tests to evaluate his knee injury - which overshadowed what would have been a great weekend for Americans abroad with standout performances from Emmanuel Sabbi, Tim Weah, and others
BY Brian Sciaretta Posted
August 12, 2018
6:00 PM
If not for one moment, this would have been a great weekend for Americans in Eurooe. A lot of players raised their games with notable performances but the injury to DeAndre Yedlin changed the tone of American soccer for the weekend.

The early part of the season is typically full of optimism but right now American fans are hoping that the best American right back is healthy.


DeAndre Yedlin earned the start for Newcastle in its Premier League season opener against his former club, Tottenaham, on Saturday. At the end of the game, Yedlin suffered a knee injury that was tough to watch on television. Afterward he had to leave the game on crutches.


Yedlin on crutches and facing further assessment after injury #nufc

Tottenham won the game 2-1 and it is not yet known the severity of Yedlin’s injury. It is expected he will undergo more tests in the coming days.

American players in the Premier League have dwindled over the past decade as more young players are going to Germany for a variety of reasons – including the fewer restrictions on non-European Union citizens to obtain work permits. But Yedlin is the most consistent American player in that league right now.

For the national team, it is also easy to envision a scenario where Yedlin is the team’s next captain. If his injury is serious, he will not be able to establish himself early for the next coach.

On top of that, there are not as many promising young American right backs coming through the system when compared with other positions.

American fans are probably collectively holding their breath and hoping for the best and that it is not a serious as it looked.


Coming into Saturday’s game, Emmanuel Sabbi was off to a strong start for a struggling Hobro team. In the first four games of the Danish Superliga season, Sabbi scored two goals and notched an assist.

But in the season’s fifth game against OB on Saturday, Sabbi took his game to another level where he scored two goals in a 3-2 win. The first goals showed impressive athleticism but the second showed a lot of skill.

Sabbi’s development is very welcome news for American soccer. Over the past few years, not many young American forwards have made an impact at the professional level – either abroad or domestically. There are promising youngsters like Josh Sargent and Tim Weah but they are still not playing regular professional minutes.

While at a lower level than Weah and Sargent, Sabbi is playing regularly and scoring. Right now he’s the only forward in the U-23 age group doing that. He is in a good situation at Hobro and it will be interesting to see how he progresses.

As a veteran of the 2017 U-20 World Cup team, Sabbi has always been extremely athletic and strong but his skill has been coming along nicely as well.


If Tim Weah got on the field for Paris St. Germain in its season opener against Caen, he had to play well.

The reasons are simple. PSG was playing without Kylian Mbappé and Edinson Cavani leaving Weah with a rare opportunity to impress in a league game. Weah will get chances this year in cup matches and maybe in some league games when when regulars are being rested due to Champions League games. But this is a rare chance for Weah to impress for PSG when it is not voluntarily resting players.

Weah, 18, came on in the 80th minute and did not disappoint. He nearly scored right away when he hit the post with a shot. Then in the 89th minute with PSG up 2-0, he scored his first professional goal when he took advantage of a bad error from Caen goalkeeper Brice Samba.

No one will ever say it was a beautiful goal but it came from effort and hustle, which will leave a very positive impression. He did not have to rush Samba on the play because the result of the game was secure. But he did anyway, and was rewarded for hard work. In the end, effort like that will earn him another chance – which is tough at a team as talented as PSG.


On Saturday, Schalke defeated Fiorentina 3-0 in a preseason friendly. McKennie was subbed into the game at halftime and scored the game’s opening goal.

On the play, McKennie showed a great awareness to make a well-timed run through the defense and get himself in a great position for an easy finish. The “soccer IQ” on this video is further evidence that McKennie’s ceiling is high. He can play a physical game that is required for Bundesliga central midfielders but he also has the intelligence and the skill to be a well-rounded player.


If Sunderland is going to get promoted out of League One and back into the Championship, Lynden Gooch is going to have to do a lot of the work.

In the season opener last week, Gooch delivered Sunderland a game-winning goal in the sixth minute of stoppage time. On Saturday, he created his team’s only goal in a 1-1 draw against Luton Town. On the play he held onto the ball in tight space before starting a give-and-go with a teammate which resulted in Gooch assisting on the goal.

The season is young, but Gooch is off to a great start. Hopefully he’s at a higher level soon – if not with Sunderland, than with a different club.


Romain Gall, 23, made his second start for Malmo since joining the club in July on Friday against Dalkurd. He delivered the winning assist on a cross in the 74th minute to continue his strong year which began at GIF Sundsvall. This was his best moment so far with Malmo and he should see his playing time increase – both in the league and in the remained of the Europa campaign.

On a side note, the defender which poorly attempted to clear Gall’s cross and allowed it to reach the goal scorer was fellow American Alex DeJohn – a native of New Jersey and a former defender for Old Dominion University.


Here is video of Romain Gall’s 43rd minute assist today in his first start for Malmo (which leads Dalkurd 1-0 in the 74th minute) pic.twitter.com/0LIbSihPwo


Matt Miazga did not get off the bench for Nantes and neither did Erik Palmer-Brown at NAC Breda – in what was the first game for either player on loan at their respective clubs. But that might chance soon as both clubs were crushed – Nantes by Monaco 3-0 and NAC by AZ 5-0.

Jonathan Amon made his long awaited return for Nordsjaelland when he came on as an 82nd minute sub in a 1-0 loss to Aalborg (the game was scoreless when he entered). Amon has been injured for most of 2018 but is finally healthy and will hopefully be back starting soon.

Emerson Hyndman also started for Hibernian in a 1-1 draw against St. Johnstone.