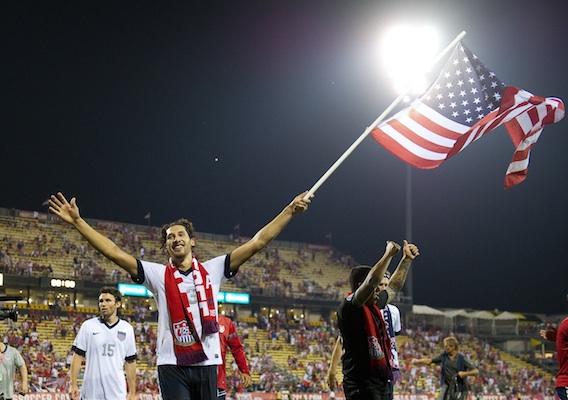 With two World Cup qualifiers on the horizon, U.S. coach Jurgen Klinsmann will be keeping a close on multiple matches this weekend. We strongly suggest you do the same. Here's your curated guide.
BY Christopher McCollum Posted
October 04, 2013
3:02 PM
There’s one weekend left until Jurgen Klinsmann announces the roster to face Jamaica and Panama next week, and there’s a bevy of players striving to make their case for inclusion. You better believe that they will have the Hexagonal matches in the back of their minds as they prepare to play for their clubs this weekend.

Tijuana v. Queretaro 10:30 p.m. (all times Eastern)
ESPN Deportes
With Herculez Gomez back to game fitness and Tijuana floundering in the bottom half of the LigaMX table, the remaining games on the Xolos schedule are all must-watch for a variety of reasons. Gomez needs strong performances to get back on the U.S. national team radar after productive runs of form from Eddie Johnson and Aron Johannsson. Joe Corona, Edgar Castillo, and Greg Garza want to advance their causes. And Tijuana's emerging young star Paul Arriola is a lot of fun to watch.

Manchester City v. Everton
7:45 a.m.
NBC Sports
Saturday is a U.S. national team goalkeeper battle, as Tim Howard will be trying to help the Toffees build on its strong start and keep Manchester City on shaky footing. Sergio Aguero should be back in the lineup for City, making the matchup even more difficult for Howard and company. Howard is still Klinsmann’s first choice, but he knows that Brad Guzan is breathing down his neck as the No. 2. Hull City v. Aston Villa
10:00 a.m.
NBC Sports Live Extra
Guzan has been doing well to keep Villa alive again this season. Hull City is without leading scorer Robbie Brady, so the scoring threats should be few and far between, giving Guzan the best chance for an American shutout this weekend. Why a keeper comparison rather than, say, the face off between Jonathan Spector and Tim Ream in the Championship (7:15 a.m., beIN Sport)? There’s no reason to believe that the Birmingham City utility man or the Bolton defender are on Klinsmann’s radar, so while the two may be battling it out to keep their teams from being relegated to League One, it’s not particularly relevant for the national team right now. Real Salt Lake v. FC Dallas 9:00 p.m.
MLS Live Kyle Beckerman and Real Salt Lake are tied for the top spot in the Western Conference, but there will be more motivation for victory beyond that, as this is the last game before Jurgen Klinsmann chooses his roster for the next qualifiers. Beckerman seems like a lock for the Hex matches, but you never know.

More like Super ClasicNO. This should be an easy tune-up game for the Galaxy, Omar Gonzalez, and Landon Donovan. But keep an eye on Jose Villarrea,l too, because if Klinsmann decides to make some surprising youth choices for the next two qualifiers, the inventive Villarreal could be near the top of the list. So what are you watching this weekend? Let us know in the comments section below.