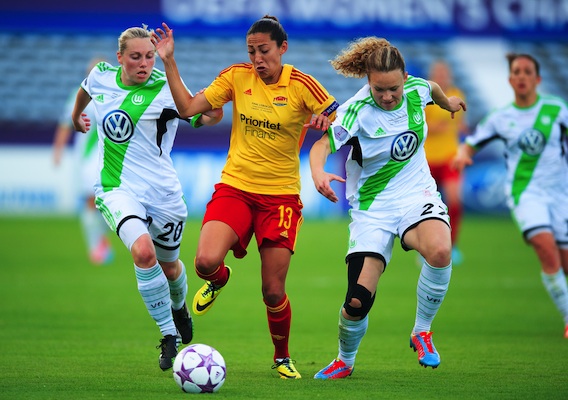 As Christen Press, Whitney Engen, and Meghan Klingenberg ended their long run in Europe, Alex Morgan started back up with the Portland Thorns. ASN's John D. Halloran has all of the details.
BY John D. Halloran Posted
June 10, 2014
1:54 PM
THE UNITED STATES women's national team opens up camp this week to prepare for two upcoming friendlies against France, but while the national team hasn't played in over a month, the U.S. women have been hard at work with their clubs. Here's a wrap-up of what you may have missed.

The contingent of U.S. women abroad are all now finished with their European seasons and, after this month's U.S. women's camp, will head back to their respective NWSL clubs. The Americans at Tyreso, which included Christen Press, Whitney Engen, and Meghan Klingenberg, are all now back in the U.S., but suffered some bitter disappointment before heading home. In the Champions League Final three weeks ago, Tyreso led 2-0 and 3-2, but couldn't hold back defending champions Wolfsburg and lost 4-3. Press had a gorgeous assist on Tyreso's second goal while Klingenberg was forced to leave the game in the 69th minute with a knee injury. In fact, while Klingenberg was down, Wolfsburg played on to score its third goal.

Heartbroken for my family and my team. I play for you. But here's to tomorrow's titles. Champions league has come and gone for this girl.

Thank for all of the kind words. We gave it everything we had... That being said, I think this one is going to hurt for a while

After the game, Klingenberg assured fans her knee was OK and did in fact return for Tyreso's final league match in which Press tallied twice.

Thank you everyone for the kind words. All is well with my knee. My heart hurts more than anything.

Engen and Klingenberg have returned to the Houston Dash—where Engen started and went the distance in the Dash's 3-0 win over Sky Blue this weekend. Press has since joined the Chicago Red Stars and played in its 3-1 loss to the Seattle Reign on Saturday. Tobin Heath, who has been playing in France with Paris Saint-German, is also headed home. Last week with PSG, Heath and fellow American Lindsey Horan helped the club to a place in next year's Champions League. However, this past weekend, PSG lost 2-0 to Olympique Lyon in the final of the Coupe de France.

Horan, who been flying a bit under the radar among U.S. women's national team fans, scored in both of PSG's last two league games, a 2-2 draw with Juvisy and a 4-0 win over Yzeure Allier. Horan will be staying abroad; Heath with return to the Portland Thorns. Finally, Bayern Munich forward Sarah Hagen is also returning home. Hagen scored in Bayern's last league game, a 1-1 draw with Turbine Potsdam. She will be joining FC Kansas City in the NWSL.

Wow, it hasn't hit me yet, but I'm going to miss playing for Bayern...my teammates, coaches, and fans made this an unbelievable 2.5 years!

This Week in NWSL

The big news in NWSL this week was the long-awaited return of Alex Morgan. After sitting out the past six months with an injured ankle, Morgan played 90 minutes for the Thorns against the Western New York Flash. Unfortunately for Morgan—and the Thorns—her return to action came in a 5-0 drubbing. In the game, Carli Lloyd scored twice and added an assist. Amy Rodriguez continued her red-hot form, scoring in Kansas City's 1-0 win over the Flash midweek on a terrific little finish (seen at the 1:46 mark of the video) and then earning a penalty in the club's 2-0 win over the Boston Breakers this weekend. Lauren Holiday converted twice from the spot against Boston in the win. Rodriguez is currently second in the league with nine goals this season. American international Amy LePeilbet, who was a key part of the U.S. squad at the 2011 World Cup and 2012 Olympics, also returned to action this week for Kansas City after being out for over a year following ACL surgery. Finally, Sydney Leroux scored a terrific strike from distance in the Seattle Reign's 3-1 win over the Red Stars (seen at the 2:56 of the video). Leroux also earned the penalty which led to Seattle's third goal.

Last Week in the NWSL