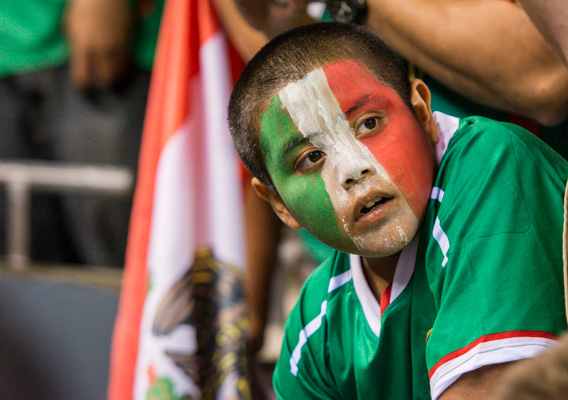 ASN's Jon Arnold takes you on a timely tour of the entire CONCACAF region, with updates from LigaMX, the Gold Cup, and a Honduran forward who needs to put his passport in his pocket.
ASN Slideshow

BY Jon Arnold Posted
July 13, 2013
10:27 AM
PAUL ARRIOLA HEARD ABOUT Herculez Gomez’s transfer to Tijuana the same way most everybody else did: on Twitter. But he had a little more reason to get excited. “Me and Herculez go way back,” said Arriola, an 18-year-old forward who recently signed his first pro contract with the Xolos and spoke with ASN last week. “He used to, when he first started playing for the San Diego Gauchos, he might not want to admit it, but he was one of my trainers at my club team when I was, like, 12 years old.” It looks like Gomez taught him well. The Chula Vista, Calif., native who came up in the Los Angeles Galaxy Academy before choosing to sign professionally even closer to home, scored in his debut, a preseason friendly against Club America, and followed it up with a second goal in his second match. “Like most goals that I score, it’s hard to remember to whole play,” he said after the first. “It’s hit or miss in my mind. I just remember getting the ball on the right side, came back across, I trapped it, I looked up, I decided just to shoot it, I looked down into the corner, and luckily I put it into the corner.” While Arriola might think his memory is failing him, it’s a dead-on description of the goal, his first as a professional and one he’s not likely to forget any time soon. The tally in the Xolos’ most recent friendly, a 3-1 loss to second division Correcaminos, saw Arriola’s freshly shaved head—a look given to him by Xolos veterans as part of a hazing ritual—fly across the box to smash in a cross from fellow American Greg Garza. Tijuana has become a stronghold for American players, but Arriola said he wasn’t attracted to the club, which he signed with in May to the chagrin of some in the Galaxy organization, solely because of its reputation for being friendly to Americans. “It came into play a little bit, but not to a big extent,” he said. “Previously, I didn’t know Joe Corona. I knew two players, Alejandro Guido and Stevie Rodriguez, who I played with on the under-17 national team. They influenced me. I was always talking to them, asking them how they were liking it.” Another factor, Arriola said, was his feeling that Liga MX would better suit his style of play, which relies on technical skill rather than size. The young forward could see a full debut next week when Tijuana opens the Liga MX season against Atlas. He should also join the U.S. U-18 team when it heads to the Milk Cup later this month.

As you’ve probably heard by now, a shady character tried to befriend some Belize players in Guatemala and reached out to them in Portland in an attempt to manipulate their opening Gold Cup match against the United States. Defender Ian Gaynair and (backup) goalkeeper Woodrow West instead went to the authorities, and CONCACAF says it has identified the man who made the bribes. In the immediate aftermath, there were lots of questions about why someone would pay Belize to lose a match it was all but guaranteed to lose anyway. First, while it wasn’t enumerated in the initial report it’s likely this unscrupulous character was hoping to do more than just get Belize to lose. In the gambling market, it can be very profitable to know exactly how many goals will be scored and/or when they’ll be scored. It’s not the first time Gold Cup matches have come under suspicion. All matches played by Cuba and Grenada in the 2011 tournament showed irregularities as well as Mexico beating El Salvador, 5-0. The allegations are jarring, but were particularly so to me because I had covered both Costa Rica’s 5-0 defeat of Cuba and the match involving El Salvador. As a journalist, you expect to discern things the average person doesn’t, but all my eyes showed that day was two good teams beating two horrible ones. That’s the danger of match manipulation. It takes so little to pull off and is so difficult to detect. For that reason, a lot of praise goes to the Belize players. While some have pointed out it was a relatively small sum of money offered, the combination of their status as part-time players, the federation’s lack of resources, and the potential of elevated profits in the future, could’ve wooed lesser men. As it is, they’ll leave with more than $6,500 in clean money thanks to an agreement struck before the tournament for $75 a day in the U.S., $250 a match, and $5,000 for participating. But far more important: They’ll leave with their dignity. The same can’t be said of at least one El Salvador player. The Blue and White have been subject to investigation after many suspicious matches, and the Spanish version of E:60 has confirmed that at least one player on the current Gold Cup roster has been involved in match manipulation. Getting back to strange Belize news, the vice president of the federation, Rawell Pelayo, remains in Houston where he was detained by the DEA. These incidents sadly take the focus away from what Belize have been able to do on the pitch. While they were taken apart by the U.S., Gaynair managed a goal against the Americans, probably more than was expected going in. The press in Belize is putting coach Ian Mork’s formation under close scrutiny, saying players haven’t grasped the formation change from the previous coach. That criticism seems a bit harsh, considering they’ve played only the best team in the region so far and were able to score doing it. Unfortunately for the Jaguars, forward Danny Jimenez is to return to Belize because his mother is in poor health, which will force Mork to make a change to his starting XI.

Raul Jimenez scored a diving header for his first international goal and Marco Fabian converted a questionable penalty to secure a 2-0 victory against Canada in a crucial Group A Gold Cup match. Canada right back David Edgar was whistled for the penalty despite appearing to make minimal contact on Fabian outside the 18-yard-box. Fabian was able to convert the spot kick given by Salvadoran referee Joel Aguilar, who has a good reputation throughout CONCACAF (even if he won’t have many fans in Costa Rica). Aguilar was the man in the middle of the U.S.’ Snow Bowl match in Denver. There was nothing wrong with Jimenez’s earlier goal, with the Club America man sprinting onto the end of a corner kick and heading it past a helpless Milan Borjan. Both teams were in desperate need of three points after losing their tournament openers, though they could each still qualify for the knockout stage of the tournament. Mexico still didn’t perform up to its perceived talent but should—key word should—be able to get a result against Martinique and move out of the group. And even though it took place just across the northern border, and The Voyageurs had a good traveling party, El Tri fans showed there’s nowhere they won’t dominate the crowd when given the opportunity, as you’ll see from Mike Russell’s photos in our slideshow above.

It was Group B’s time to shine Friday night with one match pitting Caribbean foes and the other featuring Central American teams. We’ll start with the latter. Honduras and El Salvador don’t like each other too much, which gets said a lot in soccer stories. Most teams, however, haven’t had a war between their countries sparked by a World Cup qualifier. As with most wars, things went a little deeper than anger about a match, but nevertheless the war has taken on the name “The Football War." It wasn’t as much of a war on the pitch, with Honduras continuing to sleepwalk through its group stage matches and somehow get results. Defensive midfielder Jorge Claros beat an offside trap and thumped the ball into the net for a stoppage-time winner. El Salvador had nearly gone ahead earlier in the half through every CONCACAF hipster’s favorite player, Rodolfo Zelaya, whose brace helped El Salvador to a 2-2 draw with Trinidad and Tobago, but he hit the post. We saw Haiti play beautiful soccer in that loss to los Catrachos, but like a teenager assigned War and Peace for summer reading, it couldn’t finish. Sporting Kansas City player Peterson Joseph, “the Haitian Xavi,” was one of the few players you could point to who had a poor match. He was benched and used as a late-match sub Friday night. Luckily for Haiti, Jean-Eudes Maurice, who is lobbying for a return to PSG’s first team, was in the starting XI. He had a brace to give Haiti its first points of the tournament—and give it some hope for a knockout berth. On the Socca Warriors side, the attack looked like it had put everything together in the first match, with good goals coming from Keon Daniel and Kenwyne Jones, but the squad couldn’t find a way through Les Grenadiers. Defenders like the Vancouver Whitecaps Carlyle Mitchell and Middlesbrough’s Justin Hoyte will also need to play better in defense if there’s any hope of beating Honduras. By beating Mexico in the opener and Martinique on Thursday night, Panama has secured its place as the first team through to the knockout rounds. The winner of Mexico-Martinique, if there is a winner, will take the second spot, leaving the loser of that match and Canada to vie for the third-place spot, hoping they’re better on points and goal differential than the third-place finishers in Groups B and C. The most hopeful scenario for Canada is to beat Panama and have Mexico beat Martinique by a significant margin. While expectations may have been low, things now look even less auspicious for our northern neighbors who are trying to get any form of momentum toward World Cup qualification possible. In Group C, ASN will have a far more extensive look at USA-Cuba, and I’ll note Costa Rica should easily handle Belize.

With the Gold Cup and U-20 World Cup in progress, Liga MX is allowing teams with four or more players to reschedule. The only game (I believe) affected as of yet is América’s visit to Tigres, which has been postponed to October 29 since the returning champions would’ve been without 5 El Tri players when visiting Monterrey on the original date of July 20.

This was a beloved feature of early CONCACAF Reports that petered out when Marquez stopped doing anything of note at Leon. We weren’t just feeling nostalgic this week; Marquez is once again making headlines, not with his play of course, but with his words. Marquez lashed out at MLS, saying the league lacked professionalism. And that’s all the time we’re going to give this story.

Last week, we told you about the bad luck of Honduran forward Jerry Palacios, who got to the airport in Costa Rica, realized he’d left his travel documents in his wife’s car at home, grabbed a cab back to his place, retrieved the documents, and promptly left them in the same cab. He’d been stranded for a while but has his documents and has joined up with Honduras in Miami and started its win against El Salvador.

Video of the Week

This video of the aforementioned Rodolfo Zelaya checks all our VOTW boxes. Grainy video? Obtrusive watermark? Questionable editing decisions and music choice? Misguided comparison to Messi? Check, check, check, and check, my friends. Enjoy the man they call Fito in this 2011 compilation. What do you think of the Gold Cup so far? Getting excited? Share your take below. Jon Arnold is an ASN contributing editor. Follow him on Twitter.