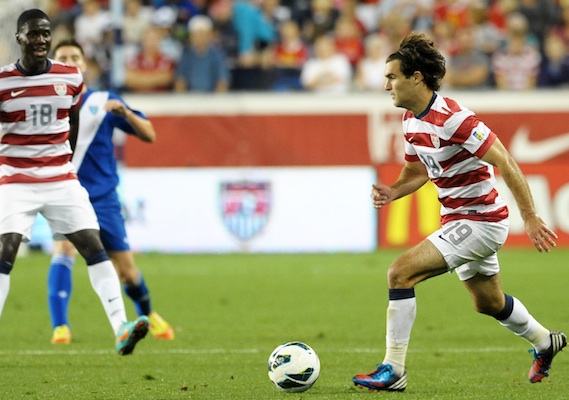 At ASN, we love conversation and debate. So when two readers, @Weeeilll and @Jrodius, started discussing the value of Graham Zusi vs. Eddie Johnson yesterday, we paid attention. Then, we posted.
BY Noah Davis Posted
November 02, 2012
6:33 AM

@thisisasn @eddie_johnson7 @gzusi what a joke, EJ has produced on the field significantly more on the pitch, but yet behind Zusi...lol

@weeeilll @thisisasn in fairness, Zusi has been in the mix far more lately.His rise has been more consistent. EJ's more meteoric.

@weeeilll @thisisasn I think his style, when it works, will always be more impressionable than Zusi's.

@jrodius @thisisasn You really, as of recent, cant say it hasnt work. So far, in a short time, has been way bigger impact than Zusi. IMO

@jrodius @thisisasn very true, im not totally disregarding Zusi...I like him over EJ, simply because EJ has produced more in a short time.

@jrodius @thisisasn I just wished Zusi could be the 10 we want. The goal scorer and assist player. So far hes only an assist player 4 MLS.

What do you think? Let us know your thoughts in the comments space below, then head over to the latest ASN 100.