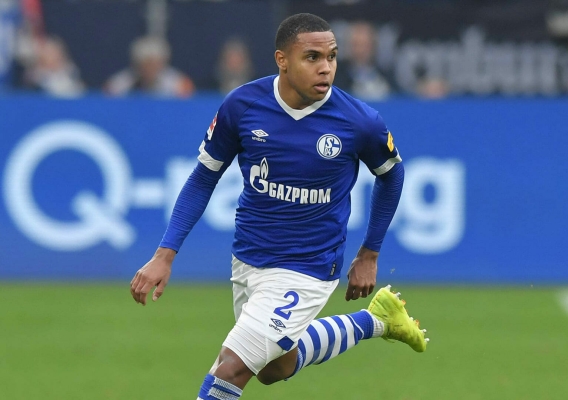 There is a lot ot talk about this weekend for Americans abroad including what's next for the numerous Americans on loan, an American teenager with a debut in Argentina, Michael Hoyos scoring in Ecuador, Andrew Wooten saving Sandhausen, Emerson Hyndman with minutes, McKennie wins the Revierderby, and more
BY Brian Sciaretta Posted
April 29, 2019
4:00 AM
THE WEEKEND is over for Americans abroad and it was an interesting one for fans as a significant number of players were healthy for the slate of game. For many, the season is nearly over and some will be at different club next year. Others, meanwhile are either aiming for spots in European competition, aiming to avoid relegation, or surging for promotion.

To be sure, there were plenty of absences as Tyler Adams was still out for RB Leipzig and John Brooks was not able to play for Wolfsburg. In Scotland, Tim Weah did not even dress for Celtic which could imply that either his loan is ending early, he injured, been over taken for his role on the bench. Either way, the U-20 World Cup seems like a good place for him. In England, Derby County came up with a huge win as it nears a spot in the promotional playoffs - but Duane Holmes is still out.

Here were my thoughts from the weekend.

The loans of Miazga, Robinson, and CCV


There was a lot of good news in the Championship as Matt Miazga and Reading along with Antonee Robinson and Wigan Athletic both secured their survival after a difficult relegation battle ensued over the past few months. Both players played very well down the stretch but both are only at their respective clubs on loan.

The big question for these two players, along with Cameron Carter-Vickers at Swansea, is where they go after this season. Miazga is owned by Chelsea, Carter-Vickers is owned by Tottenham, and Robinson is owned by Everton. It would make sense that all three report back to their parent clubs for preseason but it is important that all three either force a transfer or another loan where they can play. The good news is that all three had successful loans to clubs that would love to have them back. But can a deal be struck or should the players push for a loan to more high-profile clubs?


Some highlights of Antonee Robinson yesterday vs. Birmingham City. A man of the match performance and he could’ve had a few assists if his teammates finished better. pic.twitter.com/4EHPx6hR6Q

The worst thing that could happen would be if Miazga remained at Chelsea as cover in central defense for the transfer ban but didn’t play. But with his contract having only one more season, that might be unlikely.

Miazga had another big performance today vs. West Brom to all but ensure @ReadingFC survival in the Championship! ?

The most likely bet is that all players return to better Championship clubs next season although Miazga might seek out a Premier League opportunity.


After Weston McKennie and Christian Pulisic were injured last month playing for the United States, both returned last weekend and were able to play in the Revierderby on Saturday. This was expected to be one-way traffic as Borussia Dortmund was hosting the game and still had hopes of winning the Bundesliga and came into Saturday trailing Bayern Munich by one point. Meanwhile, Schalke was just one place above the relegation playoff position after a dismal season.


Weston McKennie helped @s04_us to a stunning win at arch rival Dortmund - arguably the biggest W of his club career to date.@stuholden and @JoyPaulIan break down what it means on #AmerikanerAbroad ???????? pic.twitter.com/OxtARGjThZ

The game was one-way traffic, although not in the way every one expected. Dortmund struck first in the 14th minute but collapsed after conceding two goals followed by having two players sent off. The result was a 4-2 away win for Schalke. Both Americans played but never at the same time. McKennie started for Schalke and played 77 minutes. Pulisic came on in the 78th minute for Dortmund.

It was a tough game for both players but McKennie played well defensively, as usual, although he picked up an unnecessary yellow card when his team was up two goals and two players. Pulisic came into the game and was about as active as expected for a team that had to chase the ball.

But overall, it was a great win for Schalke to essentially secure survival in the Bundesliga while dealing a massive blow to Dortmund. Bayern Munich only came away with a draw against lowly Nurnberg and a Dortmund win over Schalke would have seen it move to the top of the table. This loss was a massive disappointment.

Hyndman sees the field for Bournemouth


Emerson Hyndman’s career has been mostly disappointing to date. He didn’t play much at Fulham but signed for AFC Bournemouth in 2016. Over the past three years, he’s gone on two half-season loans to Scotland. He had one successful loan to Rangers in the second half of the 2016/17 season and a less successful loan to Hibernian in the first half of the 2018/19 season. Last season he made a Premier League cameo in the final game of the season for Bournemouth.


In the Premier League: Texas native Emerson Hyndman on for Bournemouth. 2-2 vs Southampton https://t.co/pDcCdvIl8e

On Saturday, Hyndman came off the bench in the 52nd minute for Bournemouth in a 3-3 draw with Southampton. Overall, Hyndman looked steady but a little rusty – which is to be expected. He made 34 touches in his 38 minutes of action although his best attributes were defensive as he was credited with a team-high six tackles.

Now 23, Hyndman will be entering into the final year of his contract. He is in a good position to perhaps force a transfer as Bournemouth will probably want to get something for him, unless he is in their plans. He has a European passport – which should open the doors for him throughout Europe. If not, he could secure a nice deal with an MLS team.


The best American forward at the moment is Andrew Wooten for Sandhausen. The German-born Wooten, 29, scored again on Saturday for his 15th goal of the 2.Bundesliga season and his eight goal in the past nine games.


American forward Andrew Wooten with his 15th goal of the season for Sandhausen in the 2.Bundesliga and his 8th in 9 games. The 29 year old is almost single handedly saving the club from relegation pic.twitter.com/cGsoc63Nq2


California native Michael Hoyos, 27, scored his third goal of the 2019 Ecuadorian Liga Pro season for Guayaquil City in a 3-1 win over Tecnico Universitario on Sunday night. It was his first game back since serving a red card suspension.

Hoyos has said publicly that he would like to earn a deal in MLS and his consistent production in Ecuador (he had 10 goals last season) should pique the interest of a few clubs in the league.


Last night, American winger Michael Hoyos scored his 3rd goal of the 2019 Ecuadorian Liga Pro season for Guayaquil City in a 3-1 win over Tecnico Universitario. He had 10 last season. He is certainly one to watch for a possible move to MLS sooner than later pic.twitter.com/ePe12woQ4W


Staying in South America, young American-born midfielder Matko Miljevic, 17, made his professional debut for Argentinos Juniors on Sunday in a 1-0 win over San Lorenzo. The Miami native came on in the 89th minute and helped his team see out the win in the Copa de Superliga.


American-born Matko Miljevic, 17, makes his pro debut in Argentina for Argentinos Juniors in a 1-0 win over San Lorenzo when he came on as an 89th minute sub. Miljevic has played for the youth NTs of both Argentina & the USA. My guess is that he plays for the US U-20s next cycle https://t.co/cA01LkfDfk

After the game, Miljevic told journalist Arch Bell that he is hoping for a call-up to the United States soon. Most likely the soonest he would play for the U.S. team would be in fall, or whenever the 2021 U-20 cycle kicks off.


Piggybacking on Brian’s post, Matko told me last night that he hopes to get a U.S. call soon. “Que me llamen.” https://t.co/4tuhtbNXl5

There are not to many Americans on the initial rosters in the Canadian Premier League for its inaugural season.

Noah Verhoeven and Lukas MacNaughton are both on Pacific FC but are American/Canadian dual nationals who have represented Canada internationally. The same with Mason Trafford of Calvary FC.

The lone American in the new league who is not tied to another nation is defender Blake Smith who is on Pacific FC on loan from FC Cincinnati.


Historical win today for @Pacificfccpl! The boys showed a lot of character to go down a man and still get the result. Thank you to all of the fans that came out to support us! Back at it again on Wednesday ????.

Smith, 28, earned the start for Pacific FC’s first ever game on Saturday. Pacific won 1-0 against the HFX Wanderers and with the league’s other games all ending in draws, it was the first ever win in the Canadian Premier League.

Novakovich to return to Reading

Where will Andrija Novakovich play next year? Well, he won't remain at Fortuna Sittard in the Eredivisie where he currently plays on loan from Reading in the Championship. He has nine Eredivisie goals on the season and another in the Dutch where he has helped Fortuna Sittard avoid a relegation fight in its first season since earning promotion.

According to reports, Reading do not want to sell him.