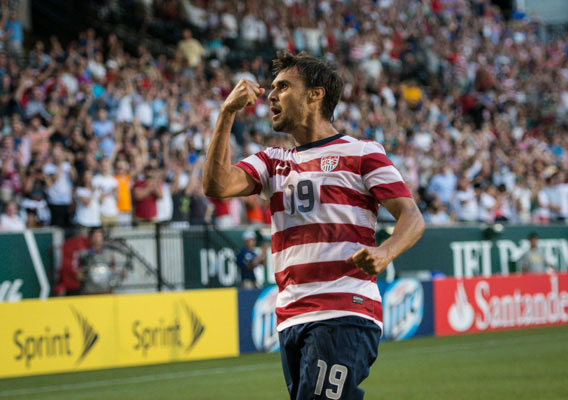 Chris Wondowlowski had three Ws on his jersey, and three goals in the first half against Belize. Shockingly, disappointingly, Belize scored as well. It's 3-1 at the break.
ASN Slideshow

BY Liviu Bird Posted
July 09, 2013
11:59 PM
PORTLAND, Ore.—At the break, the United States leads Belize 3-1 off a Chris Wondolowski hat trick. He broke the deadlock after just 12 minutes with a volley off a rebound inside the six-yard box. Near the end of the half, he struck twice more, both on diving headers. However, Ian Gaynair pulled one back for Belize off a free kick, keeping it close at the break. Belize came out in a highly defensive formation, packing five in the back as the U.S. advanced up the field. The Americans struggled to find much of a rhythm through the middle, resorting to endless crosses to find a way through. Nick Rimando made just one save in the opening stanza, backpedaling to touch a looping shot against the crossbar from Deon McCauley. Belize goalkeeper Shane Orio was much busier, coming off his line multiple times and making a nice one-on-one save on Joe Corona in the 33rd minute. Can the U.S. extend its lead in the second half? Will the Americans find a way through besides endless crosses and corner kicks? Can Rimando finish his cocktail and count each fan in the stands individually by the match’s end? Keep watching to find out. P.S. See the typo proof in the photo above, and Mix Diskerud's majestic locks in the slideshow at right.