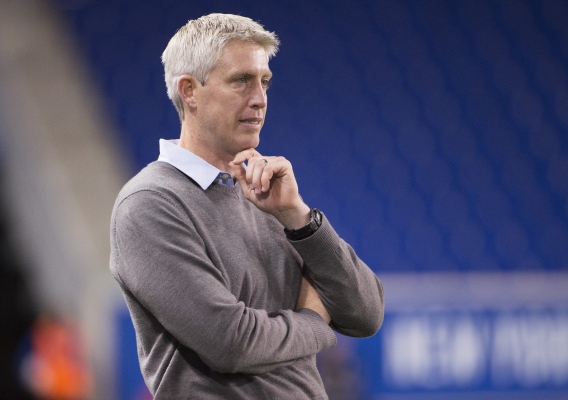 The Red Bulls organization is arguably the best in the United States at player development. Brian Sciaretta spoke with Red Bulls II coach John Wolyniec about how the club prepares is youngsters for the first team.

BY Brian Sciaretta Posted
December 06, 2018
12:00 PM
MORRISTOWN, N.J. – As a player John Wolyniec was beloved by fans of the Red Bulls organization. He played 142 MLS games for the club over three stints with the first coming in 1999 when the club was named the Metrostars.

But when he retired in 2010, he took on a role with the highly regarded Red Bulls Academy and then was named the club’s first USL Coach in 2015. During that time, he has grown into an important figure within the club.

His USL team, the Red Bulls II, has been both a winning team and has been the best in USL at providing a smooth transition from USL to an MLS team that has won the Supporters’ Shield two of the last three years.

ASN spoke at length with Wolyniec about player development at the Red Bulls organization and how it uses its USL team to feel the first team.


Brian Sciaretta for ASN: The Red Bulls USL to MLS pipeline has been instrumental to its success. So many players have been able to make a seamless transition to a top MLS team. Why is that?

Wolyniec: I think it is due to a bunch of different reasons. First is the success of our academy. For awhile now they've been producing players, winning championships at the youth level, putting players in college. So obviously when you have a pool of players, that's going to help.

The next big thing is that when Jesse and Ali started and it was continued with Dennis and Chris, they made sure there was a lot of connection. They're doing a great job of integrating the first and second teams. We work out at the same facilities and we see each other all the time. I'm in the head coach's office as much as possible. There's a big connection there both staff-wise and player wise. We spend a considerable amount of time considering player movement and which players should be where for training. That connection really helps. The players feel like they belong no matter if they're with the first or second team.

The other thing is that Jesse and Chris have done a really good job to have the courage to play younger players. That is not always an easy thing. There is always a risk. One of the reasons why teams bring in veterans is that they are known and you can count on them. So playing young players isn't always easy. The trust level is different. To have the courage to play them allows them to play at a high level and develop but it also says to the guys who are next that there is a chance. That motivation helps a lot.

ASN: Do you try to play at a similar style as the first team? That way players know what to expect when they go up?

Wolyniec: Yes. I spend a lot of time with the first team. I know what they are talking about before training as to why they are doing certain things, during training as to why their lineup is the way it is. I am not going to follow them in a direct manner but in a general sense I want to make sure I am doing a lot of the same things. I am not going to change from game to game as the first team might because of certain opponents. I try to keep things consistent but I try to implement as many of their things as possible. I am trying to make sure the message is the same.

ASN: During your time coaching Red Bulls II in USL, are you finding that players are able to take on more responsibilities at younger ages? Are younger players more prepared now at the start of their professional careers than they were when you started coaching?

Wolyniec: I think in a general sense, the landscape has gotten better. They're putting more money into it and MLS academies have now been around for a longer time. The USDA has been around for a longer time. The kids now days that I have been getting have been in more professional-type environments since they were 12-13, depending on each individual. That helps. I don't see it specifically from year to year but over a long stretch, it's different. There are a lot of games on TV these days. Soccer has infiltrated American culture now. When a kids now have the ability to watch multiple professional games every weekend, they just get a feel and sense for everything. Maybe the more basics are already handled and you can now just take the next steps earlier and add more sophistication. Now young players, not all but most, have been able to take those things on.

That is one of the things that helps our system. We do put a big emphasis on tactics, responsibilities, and principles. If the player wasn't capable of handling those things, our system would come crashing down. We're definitely a beneficiary of that.

ASN: As you work in such an important role in the Red Bull's pipeline, you naturally have a good understanding as to the future of the first team. That team has just lost one of its best players in Tyler Adams, a player you coached for a season. How do you think the team is going to be able to adjust?

Wolyniec: That's a tough question because I have so much respect for who Tyler is and what he does. I am not sure we are going to be able to fill that void, so to speak, but we certainly have players that are ready to step in and do their best. Hopefully we continue to move this forward as a club and as a team, because it's not going to be one player that is able to fill that void. Maybe we can absorb it in different ways. One of the guys I worked with a lot this year, Cristian Cásseres, has shown he has a lot of ability. He's another young player who is extremely confident and extremely energetic who has a lot to offer. It might take him some time step into Tyler's shoes. Hopefully a bunch of different guys can take a little bit of that load.

We had another successful year with the USL team and we have a bunch of young guys who are itching to get time. It's hard to predict these things. IT would have been hard to predict Tyler's quick rise.

ASN: When you won the USL title in 2016, you had two guys who would go onto to be future national team players in Tyler Adams and Aaron Long. That is a lot for one USL team to have in a year. Looking back on that, does it surprise you?

Wolyniec: They are two separate cases. Having been with the Academy for a number of years, I had known Tyler for a while. There were whispers at the club about who he was and who he is going to be. I have not surprise Tyler was playing for the national team at the U-17 level where he was the youngest on the team. It's not a shock he is with the full team although maybe a little surprising given how fast and how much of an impact he's had already. We all had a strong confidence it was just a matter of time with him.

Aaron is a little bit different. He came to me a little bit out of the blue. One of our scouts saw that he had something to offer our team. We brought him into a preseason camp with the first team. We didn't offer him a first team contract, but a second team contract so obviously we weren't thinking he was going to be on the national team two years later (laughs). We did know he had something to offer him in our system right away. I learned quickly that by working with him pretty much on a daily basis that this guy has something a little bit different. You don't notice it straight away. Tyler you knew right away. With Aron you don't realize his pace, but he's actually really fast. Also with him, he's very cleaver. He sees plays before they happen. He's always a step ahead of the attackers. That's what allows him to be so successful - especially in our system. Credit to him, he came into our system and dove into it in a big way. He got others to buy into it as well. I am certainly not surprised by his success but it took us a little bit of time to recognize all that he had to offer at a high level.

We're extremely proud of both of them.

ASN: You've seen the USL grow over the past few years. How has the league improved and what is your take on how the new restructuring is going change things with the various levels? Has the gap closed enough between USL and MLS to allow for a better transition?

Wolyniec: As far as the restructuring goes, that remains to be seen. For us, it's not that much of a change. Any kind of infrastructure buildout is big for me and I think it will pay dividends. I don't know how long it will take. From when I started coaching games in the USL, it's a big difference already in the three or four years since then. There's a big change in level. The new teams that come in are bit more professional. They have bigger staffs and better facilities. They get more fans. They checking a lot of boxes. With the NASL going away, there was an influx of new and improved players and that helped. You can tell there is something out there. Cincinnati is a bit of an outlier but there has to be an environment in the country that allows something like that to happen. I think things have changed and I think it's the right time to build out and catch-up. When you look at other countries, they've had clubs for over a hundred years. They have stadiums and everything is built out over the course of decades.

But the USL is a big part of the development piece. It's a gateway from college to MLS or academy to MLS. Getting into a first team lineup in MLS is very difficult. I saw myself as a late developer. Now there is a way to get experience.

It's also a chance for owners and cities to put their stamp on our soccer culture. It's not just player thing. It's coaches, it's referees, it's everything. If an organization is checking off a lot of boxes, I am sure MLS will be looking. It just provides a lot opportunity to a lot of people for something we all feel passionate about.

There still is a little too much of a gap between USL and MLS but we've been taking steps each and every year to close it. It's getting better and better. I enjoy watching USL games more and they're more available and there are more fans. There is momentum.