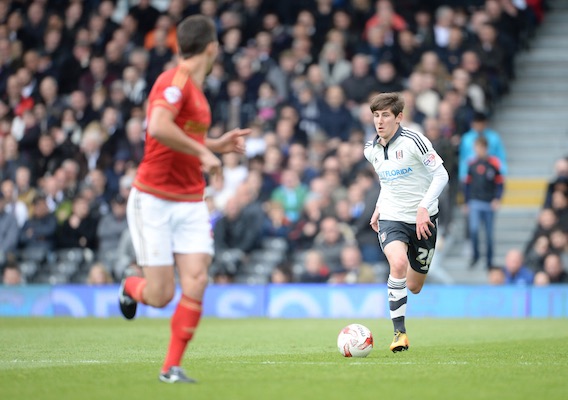 Will U.S. Fringe Players Get a Shot Against Puerto Rico?

From Emerson Hyndman to Fafa Picault to Erik Palmer-Brown, ASN's Brian Sciaretta handicaps the field of fringe U.S. national team players who may get the call against Puerto Rico on May 22.
BY Brian Sciaretta Posted
May 10, 2016
5:25 PM

WHEN THE UNITED STATES men's national team takes the field against Puerto Rico on May 22 (noon ET; FS1, UDN, UniMas) some new faces are certain to feature for the senior side. Major League Soccer players will not yet be released for the Copa America Centenario warm-up and Jurgen Klinsmann will have to use several newcomers based abroad to make up the numbers.

Some players who are not on that 40-player roster will be on the team against Puerto Rico and some will continue to train with the team right up until the beginning of the Copa America on June 3. So who are these players who are outside the 40-player preliminary roster? We're glad you asked.

Emerson Hyndman—The Dallas native has already made one appearance for the U.S. national team—immediately after the 2014 World Cup. Since then he has gone on to captain the U.S. U-20 World Cup team and he has emerged as one of the few bright spots for the underachieving U.S. U-23 team. He played well for Fulham down the stretch this season but due to some mismanagement his likelihood of returning to the London club is slim. He will now look to move to a top division club somewhere in Europe.

At this point, Hyndman seems like the most likely candidate to join up with the U.S. team this month and is likely to stay with them until the Copa America starts.

Fafa Picault—The St. Pauli forward has received public praise from Klinsmann for his recent strong play in the 2.Bundesliga. He is a late-bloomer but the New York native and dual Haitian/American citizen boasts a speedy skillset that is not too common among the current contingent of U.S. national team forwards. Like Hyndman, there seems to be a very good chance Picault joins the team.

Luis Gil—The long-time veteran of U.S. youth national teams should be in consideration if his sore hamstring heals in time for the friendly. There will be questions about his fitness, however, as he has missed the final weeks of the Liga MX season for Queretaro. If he is healthy, Gil would make sense as he would quickly integrate into the national team’s setup. Even when he does not find minutes for his club, Gil has always seemed to raise his game on the international stage.

Russell Canouse—The Pennsylvania native was potentially the captain of the 2015 U-20 World Cup team but an injury forced him to withdraw from the tournament. Over the years he has risen through Hoffenheim’s system and this year he made his Bundesliga debut in a sole, but very important, win against Wolfsburg. Next season he hopes to earn regular Bundesliga minutes.

Rubio Rubin—The Utrecht forward has had a rough year after dealing with a leg injury which required surgery. Since returning in March, playing time has been tough to come by and the whole season has been mostly a wash for the Oregon native. Still, he is one of the most talented young American forwards in the player pool and has earned three caps for the full national team. This might be a good way for Klinsmann to check in on Rubin and give him motivation heading into next season.

Erik Palmer-Brown—The teenager is expected to be a big part of the current U.S. U-20 team and his loan from Sporting Kansas City to Porto has been a complete success. He has emerged as a starting defender for Porto B and over the weekend he helped the club clinch Portugal’s Segunda.

Paul Arriola—The speedy Club Tijuana winger has been earning consistent playing time this season and plays a position of need for the U.S. senior side. He is a veteran of U.S. youth national team and is popular among his teammates. He should be able to fit into Klinsmann’s squad quickly.

Desevio Payne—The FC Groningen fullback has had to deal with injuries for long stretches this season. When he has played, he has performed well. Predominantly a right back, he can be serviceable on the left side, and his versatility might make him an attractive option for Klinsmann.

Julian Green—Based on his resume over the past few years, Green probably does not deserve to be on this team. His loan to Hamburg in 2014-15 did not go well and his decision to remain at Bayern Munich to play for the U-23 team in 2015-16 was ill-advised. Still, he is a World Cup veteran and Klinsmann followed him closely for years prior to his switch. Klinsmann might see this as a low-risk opportunity to check in with the once highly regarded youngster who is now fallen on hard times.

Jorge Villafana—The 26-year-old Santos Laguna left back is not young but has done well in his first year in Liga MX. Despite that, he seems like a better bet to make his U.S. national team debut after the Copa America as opposed to a friendly that will feature many younger players.

Injured or prior commitments

Gedion Zelalem—Klinsmann has demonstrated a fondness for Zelalem for a while. The teenager has had a mixed year on loan at Rangers but it ended on a high note as the storied club earned promotion and defeated Celtic in the Scottish Cup. Klinsmann probably would have liked to have had Zelalem available for the Puert Rico match to make his debut but Rangers is in the Scottish Cup final on May 21.

Cameron Carter-Vickers—The high-upside central defender at Tottenham earned praise at the U-20 World Cup last year and Klinsmann has mentioned Carter-Vickers a few times on occasion. Unfortunately, Carter-Vickers is still out with an injured back.