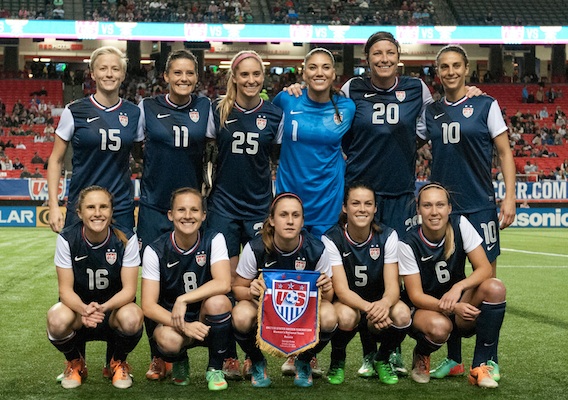 Who Will Make the 2015 USWNT World Cup Roster?

Blessed with an embarrassment of riches at nearly every position, U.S. women's national team coach Tom Sermanni has some very difficult decisions to make in the months ahead.
BY John D. Halloran Posted
February 19, 2014
11:04 AM
THE UNITED STATES WOMEN'S national team just completed its first stretch of games in 2014, defeating Canada 1-0 two weeks ago and crushing Russia by a combined score of 15-0 in two games over the past week. The wins bring the U.S.'s unbeaten streak to 42 games and continue Tom Sermanni's undefeated reign as head coach of the team. The U.S. women next head to the Algarve Cup in March, their only official competition until World Cup qualifying begins in October. Since taking the reins just over a year ago, Sermanni has called in 45 different players to U.S. camps. Considering the vast amount of talent in the player pool, picking only 23 names for the 2015 Women's World Cup in Canada is going to present him with a serious challenge. Here's how things break down right now.

As with the U.S. men's side, there's not a great deal to discuss at goalkeeper for the U.S. women. Hope Solo remains the team's undisputed No. 1 in the net, with Nicole Barnhart as the team's primary backup. The only real battle is for the No. 3 spot between Jill Loyden and Ashlyn Harris. Harris wasn't called into this most recent camp, as she is still recovering from surgery to repair a torn meniscus. Loyden, instead, received the call-up and played the second half of the U.S.'s second game against Russia--an 8-0 blowout. Virtual locks: Solo, Barnhart
Inside track: Loyden
Still in the hunt: Harris

At center-back, there's not much to discuss in terms of who will make the roster: Christie Rampone, Rachel Van Hollebeke, Becky Sauerbrunn, and Whitney Engen have the four spots locked up. The real discussion in the middle of the U.S. defense is, who will start? Rampone and Van Hollebeke were the favorites of former head coach Pia Sundhage, but both Sauerbrunn and Engen have made strong cases under Sermanni. Sauerbrunn, in particular, was fantastic against Canada, displaying both her defensive prowess and her ability to attack, contributing the game-winning assist on a fantastic run into the attacking third. At outside back, things are not so clear. Ali Krieger is a lock, and started all three games of this most recent stretch. Kelly O'Hara should also be a lock, and is just starting to work her way back from a serious ankle injury. She even started and played the first 30 minutes of the second game against Russia last week. After that, the real battle begins. Crystal Dunn has earned her way into the team over the past year due to her excellent performances with the University of North Carolina and the U.S. U-20 team. However, she was injured through this most recent camp and, while with the team, did not play. Kristie Mewis is also in the mix, but questions still remain about her defending against top teams. She is, in fact, a converted midfielder and got a chance to play at outside midfield in the first game against Russia. Stephanie Cox is also in the hunt and started both the game against Canada and the first game against Russia. However, even against Canada's muted attack, Cox struggled at times to keep up with the speed of play and gave away possession cheaply on a number of occasions. Finally, there's Meghan Klingenberg and Amy LePeilbet. Klingenberg, surprisingly, was not called in for this camp and Amy LePeilbet is still not fully fit after ACL surgery. Virtual locks: Sauerbrunn, Rampone, Van Hollebeke, Engen, Krieger, O'Hara
Inside track: Dunn
In a battle: Mewis, Cox, Klingenberg, LePeilbet

Perhaps no single player did more over the last three games to improve her standing on the U.S. depth chart than Morgan Brian. Brian had a stellar 2013, winning the Hermann Trophy at the University of Virginia, and started two games of this recent three-game stretch. Sermanni paired her with Lauren Holiday in the middle against Canada, and later with Carli Lloyd against Russia. Lloyd and Holiday are the U.S.'s two most experienced center midfielders (assuming Shannon Boxx doesn't reappear on the team in 2014) and one gets the sense that Sermanni sees a much bigger role for Brian in 2014. Overall, she played well in both matches and showed her ability to hold possession in tight spaces as well as switch the point of attack. Brian is, however, a natural attacking midfielder as are both Lloyd and Holiday, and she does not offer a different solution to the U.S.'s lack of a true defensive midfielder. Both Yael Averbuch and Amber Brooks were, surprisingly, left off the most recent roster. Brooks, in particular, received plaudits for her efforts against Brazil in November, and is a prototypical holding midfielder. Both seem like potential replacements for the holding midfield role, but Sermanni's recent experimentation with Brian makes it look like he is going to go in a different direction. At the outside midfield position, Megan Rapinoe, Tobin Heath, and Heather O'Reilly are all locks to make the team, but these most recent games may have given Sermanni something to think about in terms of the depth chart. Sundhage preferred Rapinoe and Heath in big games, but with Heath out injured in this most recent stretch of games, O'Reilly shined. Not only did O'Reilly show her usual tireless work rate, but both her service from the flank and her creativity seemed much improved. Heath, however, will not be easy to displace from the lineup. She is a class player and benefits from a strong on-the-field connection with Alex Morgan--showing an uncanny ability to find Morgan with through balls in behind opposing defenses. The last spot at outside mid is going to be a real battle. Erika Tymrak, despite showing a lot of promise in her previous caps, didn't get much of a chance in these last three games as she made just one 25-minute substitute appearance off the bench. Mewis got a chance against Russia to show what she can do in the midfield and played well. Her ability to play both as both a left-back and a left midfielder certainly have to be considered a plus when considering her for a final roster spot. With the last outside midfielder spot still up for grabs, there may still be a chance for someone new to work their way into the squad before World Cup qualifying begins. One such player could be Kealia Ohai, who helped lead both UNC to a national championship and the U.S. U-20 team to the World Cup title in 2012. Although she's never been called up by Sermanni, she was also the No. 2 pick in this year's NWSL draft. A strong summer with the Houston Dash could lead to a spot on the squad. Virtual locks: Lloyd, Holiday, Heath, O'Reilly, Rapinoe
Inside track: Brian, Tymrak, Mewis
Still in the hunt: Brooks, Averbuchp>

Abby Wambach, Alex Morgan, Sydney Leroux, and Christen Press are clearly the U.S.'s four best forwards. And, if one of them were to go down, a battle would likely emerge between Amy Rodriguez and Lindsey Horan for the fourth spot up top. It would be hard for Sermanni to deny Wambach a spot in the starting XI considering that she has more international goals than any woman who has played the game. Morgan's quality is also a given, but these last three games revealed that there is very little separating these top two forwards from the next tier. Leroux looked strong against Canada and, beyond scoring the game-winning goal, her hold-up play was excellent. Press scored three goals against Russia over two games and contributed the "hockey assist" on the lone goal against Canada. Some have suggested that a three-striker system would work best considering the U.S's talent up top, but that could just create an unsustainable amount of competition in the midfield considering the squad's depth there. However Sermanni ends up working out the U.S.'s "problem" with too much depth, it's a good problem to have heading into a World Cup year. Virtual locks: Wambach, Morgan, Leroux, Press
Inside track: No one
Still in the hunt:
Rodriguez, Horan John D. Halloran is an American Soccer Now columnist. Follow him on Twitter.