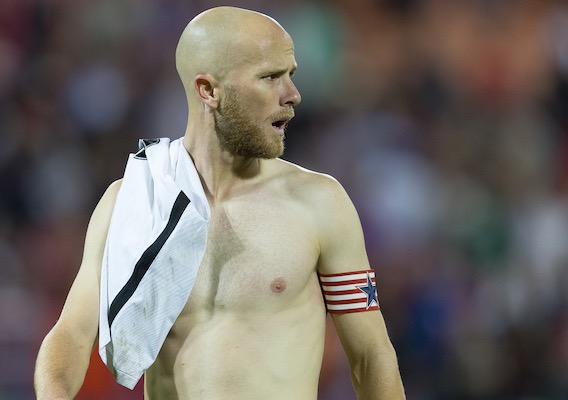 Who Will Get the Call for the Upcoming Hex Matches?

With two massive World Cup qualifiers on the horizon, American Soccer Now's Brian Sciaretta surveys the current state of the U.S. player pool—with an eye on both form and fitness.
BY Brian Sciaretta Posted
November 03, 2016
8:15 AM

THE UNITED STATES men's national team is set to open the Hexagonal with two very challenging and high-profile games—against Mexico in Columbus, Ohio, and away at Costa Rica, where it has never won. Six points would put the U.S. on cruise control to Russia, three points would be acceptable, two points would be manageable, but anything less would sound alarm bells.

Form is everything heading into the next week and with MLS playoffs in full swing, it is a good measure of how the domestic contingent is handling high-pressure games. In Europe, there is more positive news than negative.

But here’s a list of what’s going on among some of those likely to play against El Tri and Costa Rica.

Jordan Morris: While Jozy Altidore and Bobby Wood are likely to start, Jordan Morris remains an option. He has been outstanding for Seattle recently, carrying the Sounders into the playoffs, helping them eliminate Sporting Kansas City, and putting FC Dallas on the brink. Morris thrives in wide open games and that is not how a typical U.S.–Mexico game plays out. Because of that, Morris is a very good option off the bench if the U.S. needs a goal and the game opens up.

Michael Bradley: On Sunday the U.S. captain had his best game since joining Toronto two years ago. For Bradley it is all about confidence and momentum. He was always likely to start but it has been a while since Bradley has played up to his potential. If he is back, the U.S. team is in great shape.

Jozy Altidore: Altidore has an ugly history of suffering injuries before big games and tournaments. But he is back right now and playing well for a surging Toronto team. He is very likely to start against Mexico and will look to leave his mark on the rivalry.

Christian Pulisic: Borussia Dortmund's teenage sensation has broken into the U.S. team but is yet to start a big game for Jurgen Klinsmann. He is obviously talented enough to play a big role with the U.S. but the game against Mexico is going to be a far cry from what a typical Dortmund game is like. It is going to be physical and chippy. Still, he is trending in the right direction and Mexican defenders will be concerned whenever Pulisic has the ball.

Matt Besler: It has been an uneasy season for the U.S. national team mainstay who only made 19 appearances for Sporting Kansas City this year. But he ended the season playing well and was a major reason why Kansas City only conceded one goal in its final three games before bowing out in a hard-fought loss away to Seattle.

Tim Howard: Since returning from his sabbatical in 2015, the No. 1job for the U.S. has been a mystery, with Brad Guzan and Tim Howard rotating. But Howard has been playing very good soccer lately for Colorado, where he helped his team stay close to the Los Angeles Galaxy in a lopsided 1-0 defeat. On the other hand, Guzan has been non-existent at Middlesbrough. When Howard is on, like now, the U.S. team has an edge.

DeAndre Yedlin: The right back position is up in the air. Fabian Johnson, Michael Orozco, Geoff Cameron, Timothy Chandler, and DeAndre Yedlin have all featured there under Klinsmann with some regularity. Chandler has raised his game recently at Eintracht but so has Yedlin with the Championship-leading Newcastle. Yedlin received a bad red card at the Copa America in a big game and Chandler has had mostly bad moments for the U.S. team. Still, Yedlin looks to be more integrated at the team right now and the fact that he is playing well bodes well.

Sacha Kljestan: A finalist for Major League Soccer's MVP award, Sacha Kljestan has emerged as a strong contender to start against Mexico—something that was unimaginable as recently as three months ago. Despite the Red Bulls' loss to start its playoff campaign, Kljestan played well. His performance on Sunday will be important to have momentum heading into the international break.

Bobby Wood: The Hawaii native has had a great 2016 but his move to Bundesliga side Hamburg SV has been a mixed bag. Wood has received playing time and even scored in his first two league games of the season. But last-place Hamburg is awful and cannot generate offense. Wood is not seeing much of the ball (except for desperate long balls) and he looks frustrated. He picked up a red card, along with a three-game suspension, over the weekend.

Alejandro Bedoya: After joining the Philadelphia Union over the summer, Alejandro Bedoya's stock has dropped. The club’s decline was not Bedoya’s fault—better to blame the lack of a defensive midfielder, a young backline, and a struggling forward. But the former Nantes stalwart Bedoya has not been able to play his game and is not in great form heading into next week.

Chris Wondolowski: Klinsmann has defended his repeated call-ups of Wondolowski but the truth is that the San Jose forward has not been playing or training hard in recent weeks due to his team’s failure to make the playoffs.

Brad Guzan: The one-time first-choice goalkeeper for the U.S.has likely moved to the back-up role after being benched at Middlesbrough.

Perry Kitchen: The season began very well for Kitchen, who was named captain for Scottish Premier League club Heart of Midlothian. But Hearts have endured a rough couple of weeks, and after having a subpar outing with the U.S. against New Zealand, the momentum is not in Kitchen’s favor.

Kyle Beckerman: The longtime U.S. mainstay has struggled along with the rest of the Real Salt Lake team, which faded down the stretch and barely made the playoffs. After a quick elimination at the hands of the Los Angeles Galaxy, Beckerman has not made a strong case to continue to be part of the team. He’s had a very good career but Father Time is taking its toll.

Jermaine Jones: After being injured most of the second half of the year, Jones is back on the field for the Colorado Rapids and played against the Galaxy over the weekend. Jones desperately wants to be part of the upcoming qualifiers and Klinsmann has always loved what Jones brings to the team. But how fit is he for what is a very important pair of games?

Danny Williams: It has always been hard to determine where Danny Williams stands in Klinsmann’s depth chart. Sometimes it looks like he is on the verge of breaking into the starting lineup and then he does not get called up for long stretches. Things look better for Williams than they have in a long time. He’s a regular starter for a Reading team that is in fifth place in the Championship. He’s started 14 of the team’s 15 games this year with two goals. With the struggles of Kitchen and Beckerman, Williams could quietly be rising up the depth chart.

Geoff Cameron: Geoff Cameron is the starting central defender on the U.S. team alongside John Brooks. But he can also play defensive midfield and right back for Stoke City (and occasionally under Klinsmann as well). The problem with Cameron is that he is dealing with a slight knee injury. How much that impacts the upcoming camp remains up in the air.

Julian Green/Lynden Gooch/Paul Arriola: The young trio of wingers has all showed well when given the opportunity in recent months but all three are playing infrequently for their clubs. How much will that sway Klinsmann? What is the pecking order of these three? We should find out soon enough.