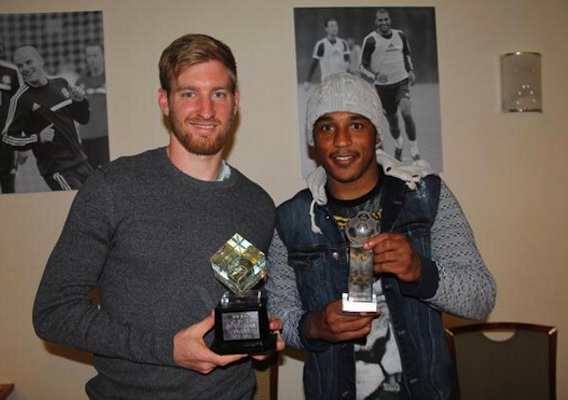 Who Wants to Go to Brazil? Yanks Are Stepping Up

With just a few weeks remaining before Jurgen Klinsmann selects his provisional World Cup roster, several key Americans are rounding into form. Josh Deaver has the details and highlights.
BY Josh Deaver Posted
April 30, 2014
9:57 AM
Editor's note: A new ASN 100 will be released on Thursday, May 1. We've made some changes on the panel, and there are some significant changes in the rankings. Michael Bradley—ASN rank #1
Less than two month before the World Cup, “Michael Bradley” and “foot issues” are two things you don’t want to hear in the same sentence. However, with Toronto FC on a bye week, the American midfield maestro underwent a minor procedure this week to relieve what Coach Ryan Nelsen called a “nerve issue.” Planned in advance, the procedure is not expected to keep Bradley out of the lineup when the Reds face New England on Saturday or for its midweek Canadian Championship clash with Vancouver. “It just means he has to get off it for a week,” Nelsen said. Tim Howard—ASN rank #3
From the man himself: Tim Howard will officially retire when his current contract ends after the 2017-2018 Premier League season. Only recently penning an extension with Everton, the U.S. No. 1 has spent seven years with the Toffees and sees no reason to continue past his 40th birthday. "I would pretty much take that to the bank that I won't be playing past 40,” Howard told ESPN. “There are other things I want to achieve in life, other things that I want to do." Howard singled out coaching and broadcasting—something he has dabbled in for NBC Sports—as likely post-career fields. He likewise quashed ideas of an MLS on-field return saying, "I think that ship has sailed for me now. I think MLS had its chance, if I'm being honest, but now I'll finish my career with Everton and be a happy man." Clint Dempsey—ASN rank #8
Two false starts after joining Seattle Sounders last season, Clint Dempsey finally looks to be rounding into top form. Already holding pole position as the top goal scorer in MLS, Dempsey added two more to his account on Saturday, leading the Rave Green to an easy 4-1 win over the Colorado Rapids. He can be largely be credited with Lamar Neagle’s first-half stoppage time tap in—a goal that came off a goal-line clearance from a Dempsey shot—but it wasn’t until the second half when Dempsey started showing some playground flair. A slicker-than-slick spin move flick shortly after the break created Seattle’s second, as Dempsey followed up on a Marco Pappa shot for the goal. The U.S. captain secured his brace six minutes later, sending a looped header past Clint Irwin off a corner kick for his 8th strike of the season. The league-leading Sounders take on a struggling Philadelphia Union side on Saturday, setting the table for a mid-week clash against FC Dallas, which currently trails Seattle only by goal differential in the Western Conference. Terrence Boyd—ASN rank #24
Making his own late push for World Cup glory, Boyd continues to light up the score sheet in Austria. Taking on league-destroyers Red Bull Salzburg on Saturday, Boyd secured a brace for the second consecutive match, leading Rapid to a 2-1 win and dusting off his—honestly, pretty cool—cyclops celebration in the process. Boyd got the Green and Whites on the board early with a snap header off a 15th-minute corner kick. Rapid would concede in the second half before Boyd delivered the game-winner nine minutes from full time. After breaking the offside trap, Boyd ran on to a well-weighted pass inside the box and sent his low right-footed effort in to the far corner of the Salzburg net, much to the delight of the partisan Vienna crowd. With the strike Boyd now has 18 goals in all competitions, surpassing last year’s output with two matches remaining. John Brooks—ASN rank #26
It’s been an interesting few weeks for John Brooks. He has been called out by his coach; praised; unable to train after getting a massive back tattoo; benched; and, now, back in the lineup and scoring goals for Hertha Berlin. Getting the start against relegation candidates Eintracht Braunschweig on Saturday—thanks partly to injury—Brooks put in a full 90-minute shift and scored his second league goal of the season in a 2-0 win for Hertha. With the match scoreless in the 61st minute, Brooks controlled a deflected cross before rifling a left-footed shot between four defenders for the eventual game-winner. With World Cup roster selection approaching, it’s also not a bad time to make it on the Kicker Bundesliga Team of the Week.
Hertha 1-0 Braunschweig (Goal Brooks) 26-04-2014 by raghey Timothy Chandler—ASN rank #27

When Klinsmann tweets, you listen. Just as Chandler was set to make his national team return, he suffered an ACL injury that seemed to end any hopes of making the trip to Brazil. Now, however, after playing 45 minutes against Mainz, a 2-0 loss, the door has flung back open for the 23-year-old. The clock is ticking, though… Tim Ream—ASN rank #41
ASN What a season for Tim Ream. Out of the Bolton team sheet to begin the year, and with prospects low, the 26-year-old put together a stellar comeback campaign, one which saw the former Red Bulls defender make 44 appearances for the Wanderers in all competitions—far outpacing his paltry 15 appearances last season. With a Premier League return potentially in the offing, his efforts were rewarded on Tuesday by the official Bolton supporter’s association, which named Ream Bolton Player of the Year. Can the St. Louis native emerge from the cold and sneak onto Klinsmann’s preliminary roster? He’s got two weeks to make his point.

PHOTO: And here are the @MyBWSA Player of the Year award winners - Tim Ream and Neil Danns! #BWFC pic.twitter.com/PvXkXg1vwo

Shane O’Neill—ASN rank #77
Benji Joya—ASN rank #98
The inaugural U.S. national team U-21 camp convened in Carson, Calif., last week, bringing together top young MLS talent as well as the remnants of the 2013 under-20 World Cup team in order to begin preparations for the 2016 Olympic qualifying cycle. After a brief camp—and in front of Jurgen Klinsmann—the Americans defeated Club Tijuana's reserves 2-1 in a friendly last Wednesday. The Chicago Fire’s Benji Joya notched both goals, including a stoppage-time winner for the Americans, while Amando Moreno, fresh off a Dallas Cup run with the U.S. under-20s, scored for the Xolos. Fellow American Paul Arriola also featured for Tijuana. Also from camp, USSoccer.com held Q&A session with Colorado Rapids’ defender Shane O’Neill who spoke about the experience. Joe Gyau—ASN rank #80
It was only a matter of time. After leading the Hoffenheim reserves in most relevant metrics, the 21-year-old was finally given his Bundesliga debut on Saturday, coming on and playing 21 minutes in a scoreless draw against Eintracht Frankfurt. Here’s to the first of many. Andrew Wooten—ASN rank #95
As the junior member of the FSV Frankfurt strike corps, Andrew Wooten hasn’t gotten many opportunities this season. But after earning his way back into the starting XI after a slow start, Wooten has now tallied in two consecutive matches, including a brace in Saturday’s 3-1 win over Energie Cottbus. Showing great change of pace with a delightful yo-yo drag into the box, Wooten opened the scoring in the 32nd minute, tallying with a right-footed effort from a tight angle. Wooten would add the eventual game-winner two minutes later after converting a penalty kick for his fourth goal of the year. ASN Contributing Editor Josh Deaver is a former academic turned soccer obsessive. Follow him on Twitter already.