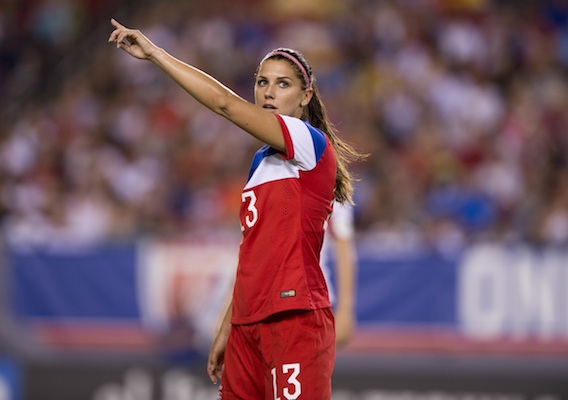 Who Should Make the 2015 Women's World Cup Team?

U.S. women's national team coach Jill Ellis has some tough choices ahead of her as she prepares her team for the 2015 World Cup in Canada. ASN's John D. Halloran takes a look at the key roster battles.
BY John D. Halloran Posted
July 31, 2014
5:10 PM
IT HAS BEEN A YEAR of change for the United States women’s national team, from Jill Ellis replacing Tom Sermanni as head coach to a switch from the team’s traditional 4-4-2 formation to a new-look 4-3-3. As dramatic as those moves have been, the team won't have long to settle in—not with the CONCACAF World Cup qualifying tournament kicking off in less than three months. Despite a number of subpar results since winning gold in the 2012 Olympics, the U.S. women are still ranked No. 1 in the world—and have been for the past six years running. The team's strength comes not only from the star power at the top of the roster, but from the incredible depth from top to bottom. As Ellis continues to wade her way through the U.S.’s deep talent pool, she will have a number of difficult decisions to make in narrowing down the roster to 23 players before the World Cup in Canada next summer. Here’s a look at how the squad may shake out as the U.S. makes its final preparations for World Cup qualifying.

One of the biggest issues Ellis will face when it comes to selecting her goalkeepers is what to do with Hope Solo. No stranger to controversy—including well-publicized feuds with former head coach Greg Ryan and former playing legend Brandi Chastain—Solo has continued to stay in the headlines in recent months for all the wrong reasons. Last month Solo was arrested and charged with domestic violence after allegedly attacking her nephew and half-sister.

Borislow.Privileged 2 benefit from his vision&generosity,fortunate 2 have known him as a friend,Proud 2 not give a shit if you don't get it!

Solo is undeniably the best goalkeeper the U.S. has, and arguably the best women’s goalkeeper in the world. However, her off-the-field activities are becoming serious distractions. Fellow U.S. goalkeeper Jill Loyden lost her sister to an act of domestic violence and has since established a foundation to help victims. Many players on the U.S. team actively and publicly support Loyden’s foundation, and, if Solo is found guilty of domestic violence, Ellis or U.S. Soccer could decide enough is enough. Solo’s support of Borislow, especially just after he died at the age of 52, doesn't seem all that controversial on the surface. But many of Solo's teammates lost their jobs when Borislow's lawsuit against Women's Professional Soccer caused the league to fold following the 2011 season. Borislow also became famous for a number of alleged incidents, including asking his players to call him "Daddy" and, in at least one case, refusing medical care for an injured player. Behind Solo on the U.S. depth chart lie Ashlyn Harris, Nicole Barnhart, Loyden and a cadre of others, including Alyssa Naeher. Barnhart has been the de facto No. 2 for many years, but should an honest battle develop for the starting position in the absence of Solo, Harris probably has the inside track based on recent form.
Virtual locks: Solo
Inside track: Harris, Barnhart
Still in the hunt: Loyden, Naeher

The pecking order among U.S. defenders is pretty clear. Becky Sauerbrunn has established herself as the U.S.’s best option at center back over the past year and Whitney Engen has continued to solidify her place on the team as well. Team captain Christie Rampone should also be a lock—assuming good health—and Rachel Van Hollebeke will probably be the team’s final selection in central defense. At outside back, Ali Krieger is a lock and should be joined by Crystal Dunn and Kelley O’Hara. Ellis used the last camp ahead of the France friendlies to look at O’Hara as a forward—where O’Hara played most of her career before being converted into a left back prior to the 2012 Olympics. However, considering the U.S.’s ongoing problems in finding a permanent solution to replace O’Hara on the left, it only makes sense that Ellis will return her to the back line in the near future.

After Krieger, Dunn, and O’Hara, the picture gets murky. Meghan Klingenberg has been in and out of the team over the past two years and Stephanie Cox has gotten a lot of playing time for the U.S. over the past few months on the left. Kristie Mewis, a natural midfielder, has also been used at left back on numerous occasions over the past two years and her versatility, especially if the U.S. sticks with the 4-3-3, could be a big plus. Finally, longtime veteran Amy LePeilbet, who has returned to playing at the club level after being out for over a year with a knee injury, and youngster Julie Johnston, who is enjoying a strong rookie season with the Chicago Red Stars, could fit into the picture along the back line, or even as holding midfielders.
Virtual locks: Sauerbrunn, Engen, Rampone, Van Hollebeke, Krieger, Dunn, O’Hara
Inside track: Cox
Still in the hunt: Klingenberg, Mewis, LePeilbet, Johnston

The U.S. is blessed with some of the best midfielders in the world, but a change to a 4-3-3 could leave a number of players competing for roster spots in unfamiliar positions. That said, central midfielders Carli Lloyd and Lauren Holiday are certain to be on the roster. They are a cut above the rest. Allie Long, who had only made one previous appearance for the U.S. prior to last month’s matches, started both games against France in June and played well. Combined with her strong club form with the Portland Thorns, she could put substantial pressure on the U.S. regulars for a roster spot come World Cup qualifying. Youngster Morgan Brian, who boasts an incredibly high technical level and has gotten a lot of playing time over the past year, has also made quite an impression in her last few appearances for the U.S. and should be on the team. After Brian, however, things get much more complicated. Megan Rapinoe and Tobin Heath, who usually played as outside midfielders in the U.S.’s 4-4-2, will either have to be used as attacking midfielders, or wide forwards, should the U.S. stay in a 4-3-3. Both can play as attacking midfielders, but with Lloyd and Holiday already there, it would seem to be a poor allocation of the team’s talent. Moving Rapinoe and Heath to forward might seem like an easy solution, but only until you look at the U.S.’s depth at that position. Both Rapinoe and Heath will surely make the roster, but it’s difficult to see how Ellis will get all of the U.S.’s top players onto the field in its current setup. The change in formation could also see a player like Heather O’Reilly squeezed out of the picture. O’Reilly has been a U.S. stalwart for more than a decade, but in a 4-3-3 she’d be forced to play as a wide forward and be in competition with not only some of the best players in the U.S. pool, but some of the best forwards in the world. O’Reilly’s game also relies heavily on her athleticism which limits her effectiveness against elite teams. Still, it seems unlikely that Ellis, who has been with the team as an assistant for many years, would drop the U.S. veteran. There are a number of other players who are also still in the mix in the midfield pool, including Shannon Boxx—who is slowly working her way back after an ACL injury—and players like Amber Brooks and Erika Tymrak, who were called in frequently in 2013.
Virtual locks: Lloyd, Holiday, Rapinoe, Heath, O’Reilly
Inside Track: Long, Brian
Still in the hunt: Boxx, Brooks, Tymrak

Alex Morgan's return from a longtime stress reaction injury is wonderful news for the U.S. women's national team, but it will also add to the intense battle for playing time among the striker corps. While Morgan was out Sydney Leroux established herself as a star among stars. Even with a fully fit Morgan returning to the lineup, Leroux will not only make the roster come 2015, but should continue to start.

In addition to Morgan and Leroux, all-time leading goal scorer Abby Wambach will likely be on the team, assuming her form and fitness can hold out for another year. Over the 18 months or so, Christen Press has added a technical and tactical element to a U.S. front line normally reliant on pure physical dominance and should make the team. Finally, Amy Rodriguez, who looked to have been surpassed by the U.S.’s other options up top, has enjoyed a revival in 2014 with a number of outstanding performances at the club level. U.S. U-20 forward Lindsey Horan, who plays her club soccer abroad with Paris Saint-Germain, could push her way into the mix if she has an outstanding performance at next month’s U-20 World Cup. And Sarah Hagen, who just recently returned to NWSL after playing for two seasons with Bayern Munich, might also be able to sneak in with a strong run of form.
Virtual locks: Morgan, Leroux, Wambach, Press
Inside Track: Rodriguez
Still in the hunt: Horan, Hagen Who would you like to see on the 2014 World Cup roster? Is there a name we left out? Is there somebody listed here doesn't deserve a spot? Share your thoughts below. John D. Halloran is an American Soccer Now columnist. Follow him on Twitter.