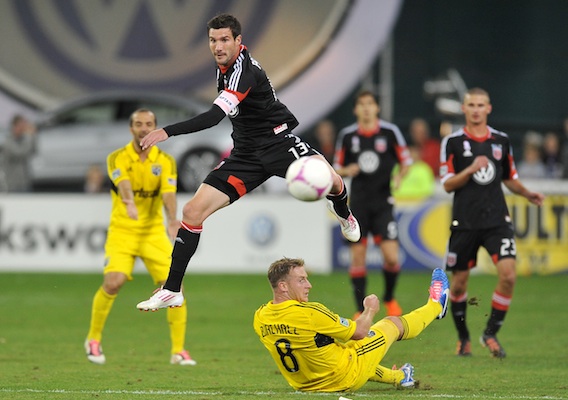 Who Gets the Call? A U.S. Soccer Roster Prediction

Jurgen Klinsmann will be announcing the U.S. roster in the next few days, and it's easy to guess the first 15 or so names on his list. It gets tricky after that, however. Here's John Godfrey's analysis. (UPDATED 3/17/13)
BY John Godfrey Posted
March 17, 2013
8:45 AM
Editor's note: This piece has a few updates from Saturday's games. IF JURGEN KLINSMANN holds true to form, he will announce his World Cup qualifying roster Sunday or Monday—shortly after the weekend matches have been completed. Who will make the cut? Who will fall just short? It's impossible to say for sure, and Klinsmann has a way of surprising us from time to time—or have you forgotten about Alan Gordon's recent trip to Antigua? The way I see it, there are three main groupings: core squad players who will certainly make the team and see the most playing time; a second tier of athletes who are likely to get named; and fringe players who are keeping their fingers crossed and hoping they get the call. Here's my breakdown.

Jozy Altidore—The hatchet was buried along the shores of the Black Sea last November. Jurgy and Jozy are BFFs again, and there is absolutely no reason not to include the red-hot AZ Alkmaar striker. Michael Bradley—He's the General. And with Carlos Bocanegra now a fringe player and Tim Howard on the mend, Bradley would seem the most likely candidate to wear the captain's armband. In a recent poll, American Soccer Now readers overwhelmingly voted for Bradley to take charge of the team. Timothy Chandler—Despite seeming very tired in his very poor showing against Honduras on February 6, Chandler will be lining up at right back against Costa Rica. Here's hoping he can handle the heights—both Commerce City, Colo., and Mexico City are high-altitude cities. And here's hoping that Klinsmann doesn't overwork his charges ahead of these two matches. Geoff Cameron—Cameron looks great at fullback for Stoke City, where his speed, technical skill, and passing ability are put to good use. He has looked so-so for the U.S. in central defense, where he rarely puts his six-foot-three frame to work for the team. Expect Cameron to start in the center of the defense, but the riverboat gambler in me wants to see Cameron at left back so Fabian Johnson can move into the midfield. Highly unlikely, I know. But I think it would work. Clint Dempsey—Unless his recent calf injury flares up again, Dempsey will see 180 minutes of action over the next two World Cup qualifiers. And he will probably score a goal or two along the way. Herculez Gomez—If Klinsmann trots out a 4-3-3, Gomez will probably start and see a ton of action. If Klinsmann opts for a 4-4-2, Gomez may be relegated to the bench until the 70th minute, when Altidore starts huffing and puffing. I really want to see an aggressive, victory-minded 4-3-3—and not just against Costa Rica. Omar Gonzalez—Every defender knows it: You can't let up for one second. And Gonzalez did just that against Honduras, jogging to clear a ball when he should have been sprinting. It marred an otherwise solid performance in what could be a long streak of starts in central defense. Did the 2011 MLS Defender of the Year and 2012 MLS Cup MVP learn his lesson? We shall see. Brad Guzan—Guzan had to bide his time on the bench in the English Premier League, and when he finally got his chance to play, he delivered. Klinsmann expects, and needs, him to do the same thing with the national team. Eddie Johnson—I originally had EJ listed in the "Probably" section below, but that's because I still remember how disappointing he was during his stint in the U.K. Johnson has started four of the last five U.S. matches and will be, at a minimum, a part of this squad. Fabian Johnson—Klinsmann said Johnson should be with the team as recently as four days ago. Unless there has been a new setback, pencil him in at left back, and keep an eye on his positioning. Will he push into the attack? He's a major threat when he does. Jermaine Jones—A conundrum, as always. Jones looked wonderful in the first leg of Schalke's Champions League matchup with Galatasaray, playing with venom and skill and scoring a crucial goal. But he also received a stupid yellow card in the match, which forced him to miss the second leg—a lapse that contributed to Schalke's elimination from the tournament. Jones will play for the U.S., and he should. But how will he play? And where does he fit in within a 4-3-3 formation? Can Jones drift wide and be useful? Or will Bradley slide over to the wing? Or—heaven forbid—will Jones, Bradley, and Danny Williams all get bunched up in the middle of a narrow, toothless attack? Figuring out how to utilize Jones is Klinsmann's biggest challenge if you ask me. Nick Rimando—If Rimando gets called into action, something has gone terribly wrong. That said, it's very good to know the veteran backup is there. Graham Zusi—The Piano Man needs to deliver 10 great crosses against Costa Rica if he wants to solidify his spot in the Starting XI. He can do it. But he needs to do it now.

Matt Besler—His decision to forego Europe will come back to haunt him in the years ahead, but for now he is a solid backup. He gets one of the defender slots. Maurice Edu—The Stoke City disaster is fading into memory now that Edu is putting in quality shifts for Bursaspor in Turkey. While it's hard to envision him starting, it's equally hard to envision him being left off the squad. Sacha Kljestan—Versatile, a team player, in good form, and has a ridiculously beautiful wife. Start packing your bags, Mr. Kljestan. Michael Parkhurst—Although he is still getting his feet wet in the Bundesliga, Parkhurst should make the team. Barring injuries, will he see any action? Perhaps not, but his ability to play anywhere along the back line all but ensures his spot. Jose Torres—Like Jermaine Jones, Torres is hard to figure. On any given day he can be the best player on the pitch, or the worst. Which Torres will show up? It's impossible to say. And it's hard to see him in the Starting XI, too. But if the U.S. attack is stymied, it's good to have a player like Torres on the bench—somebody who can shake things up and show opposing defenders something different. Danny Williams—If Klinsmann starts three defensive midfielders again—Don't do it!—Williams will probably start. My prediction: Klinsmann gets assertive at home against Costa Rica, deploys a 4-3-3, and Williams watches from the bench. What happens in Mexico City will depend on whether the U.S. wins in Commerce City.

OK, let's take a few minutes to reflect. Here are 18 players who are likely to get the call: Two goalkeepers: Guzan, Rimando
Six defenders: Besler, Cameron, Chandler, Gonzalez, Fabian Johnson, Parkhurst
Seven midfielders: Bradley, Edu, Jones, Kljestan, Torres, Williams, Zusi
Four forwards: Altidore, Dempsey, Gomez, Eddie Johnson For argument's sake, that leaves four or five spots. Let's say five spots, because Klinsmann often calls in 24 players (and because that makes it easier for me). One will definitely be a goalkeeper. At least two will be defenders. And the rest...? Let's keep looking.

Juan Agudelo—Could go either way. Agudelo has plenty of potential, but if there is only one more forward on the roster, is he your guy? Doubtful. DaMarcus Beasley—Stranger things have happened. And he has three things going for him: 1) He can play wide; 2) he is familiar with El Tri players in LigaMX; and 3) and he is on a good run of form with Puebla. And he's done it before. So four things. That's a lot of things. Things matter. Kyle Beckerman—He may be captain of the "B" team, but he may have seen his last action with the "A" team. Beckerman's last two starts came against Canada on January 29 (disappointing tie) and Jamaica on September 7, 2012 (disappointing loss, and he was subbed off in the 58th minute). He's a longshot at this point. Carlos Bocanegra—How the mighty have fallen. Bocanegra is a standup guy and a solid defender, but the fact remains that he cannot crack the lineup for a second-division Spanish team. He has not played in over a month, and 48 days will have passed between his last game action and the Costa Rica match. Do you bring him in for his leadership and experience? Do you start him because of his leadership and experience? Do you leave him off entirely? I think the 33-year-old will get the call, but how much can he deliver. UPDATE: Bocanegra on the bench yet again on Sunday, March 17. Not good. Not good at all.) Terrence Boyd—I absolutely love the guy, but the 22-year-old has a lot of in-form veterans ahead of him. Like the University of Maryland men's basketball team, he is on the bubble. Like the Terps, he may just miss out. It will probably come down to how many players Klinsmann selects. Will Bruin—Possibly, maybe, perhaps—dunno. I think his time is coming, but it's not now. He needs to destroy defenders in MLS this season, and then we'll talk about a regular role with the national team. Edgar Castillo—Club Tijuana hosted Monterrey tonight. Castillo was nowhere to be seen, which means Castillo probably does not get the call. Joe Corona—Not this time. Mix Diskerud—He falls victim to the Norse scheduling gods. Inactive since December, there's very little chance Diskerud takes a roster spot for these two matches. Dominate for Rosenborg, Mix, and we will see you in June. Michael Orozco Fiscal—I hope not. I don't care if he plays in Mexico. He's not very good. But Spector's injury today probably creates a spot for him. Yikes. Josh Gatt—See Diskerud, Mix, above. Unfortunate. Clarence Goodson—I thought he was done, but with Castillo and Spector and Cherundolo out, and Bocanegra MIA, maybe.... Bill Hamid—Maybe. After his strong showing against New York Red Bulls, perhaps this has to be upgraded to a "Probably." Sean Johnson—Probably. See "Hamid, Bill," above. Chris Pontius—Yes. This is his time. Untimely injuries have kept Pontius out in the past, but I think the versatile/talented/skilled forward-midfielder makes the team, trains with the team, and perhaps even earns a spot in the 18 for one or both of the matches. He might not see any action, but I think his full international career is about to take flight. Brek Shea—In a perfect world, Shea would have seen more action at Stoke City by now. But it's not a perfect world. Shea is a fearless winger who can be a difference maker, but it may come down to Beasley or Shea. It's a very tough call, but Shea did not make the 18 for Stoke on March 16, which tips the scales in favor of Beasley. Jonathan Spector—Taken off in the fifth minute March 16 crushes his plans for a trip over the Atlantic. It's really too bad. He's been solid for Birmingham City all season.

So let's put a stake in the ground, shall we? Here's my projected 24-man roster: GOALKEEPERS (3): Guzan, Johnson, Rimando
DEFENDERS (8): Besler, Bocanegra, Cameron, Chandler, Fiscal, Gonzalez, Fabian Johnson, Parkhurst
MIDFIELDERS (8): Beasley, Bradley, Edu, Jones, Kljestan, Torres, Williams, Zusi
FORWARDS (5): Altidore, Dempsey, Gomez, Eddie Johnson, Pontius All right—have at it. Tell me what an idiot I am, how I blew it, why I should throw my MacBook Air in the fireplace and do something else for a living. You know you want to. John Godfrey is the founder and editor in chief of American Soccer Now.