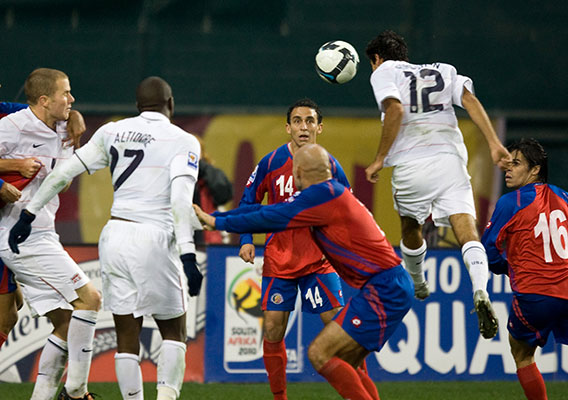 With the United States about to enter the 2013 Hexagonal, we look back on five guys who came up big for America with World Cup qualification on the line.
BY Daryl Grove Posted
February 01, 2013
7:53 AM

HEROICS—Game-winning free kick
THE RESULT—Honduras 1, USA 2
WHERE & WHEN—Estadio Olimpico; March 28, 2001 The mohawked maverick had given away the free kick that led to Honduras’ 60th minute equalizer. But Mathis redeemed himself with an 87th-minute free kick of his own, needing just a two-step run-up to bend the ball up and over a jumping wall, then down and inside the near post. Beckham himself could not have done better, and the 2-1 win away to Los Catrachos made all the difference, as the U.S. would later book the last CONCACAF spot at the 2002 World Cup by finishing third in the Hex—three points ahead of fourth-place Honduras.

HEROICS—Last-minute equalizer
THE RESULT—USA 2, Costa Rica 2
WHERE & WHEN—RFK Stadium; Oct. 14, 2009
He may be America’s most-maligned left back, but Jonathan Bornstein made a lot of people very happy in the final game of World Cup 2010 qualification. Not only did his 94th-minute game-tying header versus Costa Rica ensure that the U.S. finished first in the Hex, not only did it ensure the U.S. wouldn’t suffer the agony of defeat in the first game following Charlie Davies’ near-fatal accident, it also meant that an eternally grateful Honduras would be heading to the World Cup. (Bornstein is considerably less popular in Costa Rica though.)

HEROICS—First point at the Azteca, ever
THE RESULT—Mexico 0, USA 0
WHERE & WHEN—Estadio Azteca, Nov. 2, 1997 America’s first-ever positive result in Mexico against Mexico was a team effort, epitomized by South African-born striker Roy Wegerle. Missing starters Kasey Keller, Tab Ramos, Claudio Reyna, and Earnie Stewart (whom Wegerle was filling in for up front), coach Steve Sampson was likely expecting defeat. And when Jeff Agoos was sent off in the 32nd minute, it looked inevitable. But Sampson switched to a 4-5-0, with Wegerle moving to midfield and doing a lot more running and hassling than he was used to. The result was a historic goalless draw, which Sampson called a “golden point.” Until Klinsmann’s August 2012 friendly win, this was the U.S.’s best-ever result at the Azteca. It’s arguably still the most important. And seven days later, Wegerle scored twice as the U.S. beat Canada 3-0 and qualified for the 1998 World Cup.

HEROICS—Borgetti stare-down
THE RESULT—USA 2, Mexico 0
WHERE & WHEN—Columbus Crew Stadium; Sept. 3, 2005 Mexico striker Jared Borgetti had been too much for Oguchi Onyewu to handle in March 2005, as the wily forward scored a key goal in El Tri's 2-1 victory at Estadio Azteca. But Onyewu learned, and waited. And when the teams met again in Ohio that September, the six-foot-four Gooch showed his strength and shut Borgetti down all day—most memorably in a post-challenge confrontation where Onyewu gave his man the shark eyes until Borgetti backed down. The U.S. won 2-0, becoming the first CONCACAF team to secure their spot at the 2006 World Cup.

HEROICS—The shot heard ‘round the world
THE RESULT—Trinidad & Tobago 0, USA 1
WHERE & WHEN—National Stadium; Port of Spain, Nov. 19, 1989 The U.S. had not been to a World Cup since 1950, and needed an unlikely away win against Trinidad & Tobago to make it to Italia ‘90. So when Tab Ramos played an awkward, bouncing pass to defensive midfielder Paul Caligiuri, T&T didn’t look too worried. But then Caligiuri controlled the ball with his stomach, faked to shoot, accelerated forward, and then hit a long-range strike which dipped past the keeper, sending the U.S. to their first World Cup in 40 years. That moment marked the beginning of the modern era of U.S. Soccer. JUST MISSED OUT—Tab Ramos, for the assist heard ‘round the world, plus an important winner vs Costa Rica in 1997; Hugo Perez, for a game-winning close-range header versus El Salvador (the country of his birth) in 1989, without which Caligiuri’s goal would have been pointless; Michael Bradley, for two goals against Mexico in February 2009 that started the last Hex off with a big win; Jozy Altidore, for his hat-trick versus Trinidad & Tobago in April 2009. OK, this is where you come in. Who did we leave out? Who should we have excluded? We want to hear your take, so be sure to leave it in the comments section below. Daryl Grove is co-host of the Total Soccer Show, "the podcast for intelligent American soccer fans."