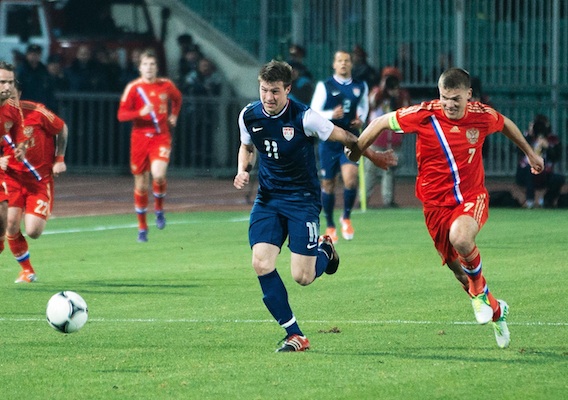 Who Are the Five Best American Wingers?

A new point of attack is essential for the United States. Here are five men who could give Klinsmann’s team some much-needed width against Costa Rica and Mexico.
BY Daryl Grove Posted
March 12, 2013
11:09 AM
THE BAD NEWS is that the U.S. team lacked width against Honduras—you know it, I know it, and hopefully Jurgen Klinsmann knows it. The good news is that there are options available to give the Americans that width in the upcoming Hexagonal games against Costa Rica and Mexico. Below are five men Klinsmann could field on the flanks to provide some proper penetration out wide.

Caps/Goals: 2/0
What He Offers: Acceleration, strength, tight-fitting jersey.
The Josh Gatt we’ve been watching on YouTube looks like the finished article. He’s all pace, strength, assists, and goals. The unedited Josh Gatt who played against Russia and Canada was less polished—the pace and strength were undeniable and can clearly be used as weapons from wide, but he was also predictable—looking short on ideas when his two biggest attributes didn’t get him past the fullback. And his final ball seemed unreliable, underlining the 21-year-old right winger’s relative inexperience.

Caps/Goals: 14/0
What He Offers: Stamina.
Pace? Check. Can cross? Check. Can also play centrally? Check? Unexpectedly good in the air? Check. Can run all day? Double-check. There’s a feeling that if the 25-year-old Bedoya had a more settled club career then maybe he’d see more time for the U.S. But that 2011 move to Rangers started with illness and injury and ended with the Scottish giants going belly-up just as Bedoya was getting back on his feet. Similarly, the recent about-face with his Swedish team Helsingborgs (he was leaving, but then signed a short term deal to take him through to the summer, at which point he’ll look for a move) somehow makes him seem less of a hot property than his talent deserves.

Caps/Goals: 11/0
What He Offers: Pace, dribbling, an opportunity for someone else to play left back?
Let’s be clear: Fabian Johnson is a fullback. That’s where the 25-year-old plays for Hoffenheim and it’s where he’s established himself for the U.S. But it’s also true that just a couple of seasons ago, Johnson played left mid for his club, and he also played there in his first start for the U.S. (vs. Slovenia, November 2011). He won a penalty in that game, playing that position, when turning in the box. He’s got the pace, the dribbling, and the crossing to be a threat. The only question: Is it worth solving a problem on the left wing only to create a hole at left back?

Caps/Goals: 97/17
What He Offers: Experience, ball retention.
DMB is only 30 years old. That yard of pace he has most definitely misplaced is mostly the result of injuries as opposed to aging, and his performances for Puebla this year suggest Beasley has compensated for the reduction in his explosiveness by becoming a sensible, reliable player who will make the right choices and help maintain possession. And he still has enough left in the tank for an occasional burst down the left touchline. If Klinsmann wants a winger who’s been there, done that, and got the Hex T-shirt, then DMB is the man for the job.

Caps/Goals: 15/0
What He Offers: Directness.
The 23-year-old Texan may not have set the Premier League on fire in his two substitute appearances for Stoke so far, but the fact that the lanky left winger has recovered from his foot surgery and is considered fit enough to play any length of time for one of England’s hardest-working teams should be sufficient proof he’s ready for a return to the U.S. team. Shea’s willingness to get wide and run at defenders is what Klinsmann seemed to like about Shea back in 2011, and those same qualities are exactly what many U.S. fans would like to see return to the team against Costa Rica and Mexico. JUST MISSED OUT: Klinsmann has taken a shine to Brad Davis but, despite his luscious left-footed deliveries, Davis is really a left-sided central midfielder and can’t offer the sort of pace and penetration that was lacking against Honduras. Similarly, Graham Zusi (theoretically) plays wide right for Sporting KC, but always looks more dangerous on his frequent drifts inside. There was maybe an argument for moving Edgar Castillo to left wing, given his performances at left wing back for Tijuana this year, but the triple fracture in his cheekbone suggests he may sit these games out. Eddie Johnson and Herculez Gomez have performed admirably when asked to play wide, but we both know they’d rather be receiving crosses than delivering them. Last and certainly not least, we’d all love to see a reinvigorated Landon Donovan marauding down the right flank against Costa Rica and—especially—Mexico, but with his return to practice set for late March it seems we’re all going to have to wait a little while longer. What do you think? Which of these wide-men would you like to see Klinsmann name to the U.S. roster for the March Hex games? Let us know in the comments below. Daryl Grove is co-host of the Total Soccer Show, "the podcast for intelligent American soccer fans."