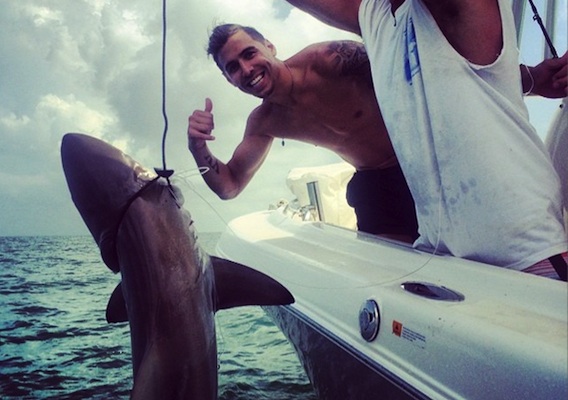 Which U.S. Player Won the World Cup of Twitter?

The 2014 World Cup cycle is over—so what happens next? First off, all of the players grab their phones, and tweet like there's no tomorrow. And then ASN pores over the posts and ranks them for you right here.
BY Justin Churchill Posted
July 15, 2014
1:05 PM

He's not going to need a bigger boat.

First shark catch of the day!!! Jaws got nothing on me ???????? #bawse #birthdayweekend #captainshawn… http://t.co/FkHquywpnK

And this from a guy who didn't see one minute of action....

The best World Cup ever

Look ma, no hands!! Make sure to pick up a copy of @ESPNMag 's The Body Issue. Hits stands 7/11. pic.twitter.com/Qrz9vuQw9x

Someday Johannsson will get a chance to show his technique for the U.S.

Phone the neighbors, wake the kids—U.S. soccer is on Letterman.

Had a good time today @lateshow with Dave. Check out the show tonight.?? http://t.co/gGV3lutHXJ

Nicely done. P.S. Make sure you don't end up making lots of money just to sit on the bench.

In the light of all this @KingJames drama I would like to announce I am taking my talents to the @Mariners. That is all. Thank you. #206

The man, the myth, the meme.

Not going to lie, some of these are pretty funny.... But you guys got wayyy to much time on your hands, lol #ThingsTimHowardCouldSave