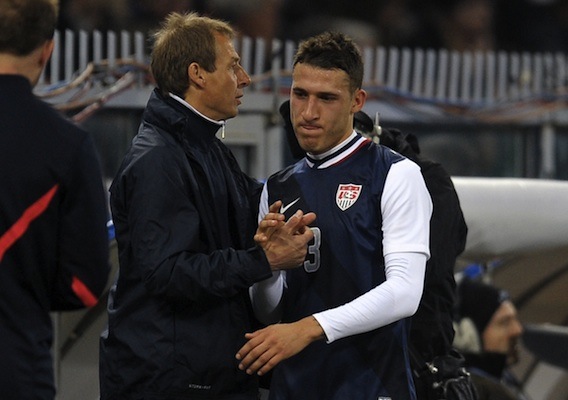 Where Is the Best U.S. Soccer Action? Right Here

You're going to watch soccer this weekend, but with so many options available to you, how do you prioritize? ASN's Jon Arnold offers up the five best U.S.-related matchups for your viewing pleasure.
BY Jon Arnold Posted
October 19, 2012
9:47 AM

FRIDAY
Hoffenheim v. Greuther Fuerth 2:30 p.m. (all times Eastern)
GolTV, ESPN Deportes The Friday afternoon Bundesliga match is always one of the best fixtures of the weekend. There’s nothing like ducking out early to start the weekend with soccer. This weekend, tune in to see if Fabian Johnson has recovered from the illness that kept him out of the recent qualifiers. His Hoffenheim side has only mustered seven points in as many matches, but hosting last-place Greuther Fuerth could be the cure they seek. Also, a Danny Williams sighting, perhaps? SATURDAY
Tottenham v. Chelsea 7:30 a.m. ESPN2 Clint Dempsey was, as he would term it, straight-up ballin’ Tuesday. He’ll be a Tottenham legend in no time if he can reproduce even a fraction of that success when the Spurs take on their London rivals. We’ll also see if Brad Freidel returns in goal for Tottenham after manager Andre Villas-Boas said that the starting job is up for grabs. Borussia Dortmund v. Schalke 2:30 p.m. GolTV It’s still early, but this third versus fourth Bundesliga matchup will kick-start the jostling for next year’s Champions League spots. You'll enjoy watching Jermaine Jones feature in the Ruhr Derby. You also will like the pretty soccer Dortmund plays, although you'll have to forget that the team's mainstay Neven Subotic could’ve been anchoring the U.S. defense. USWNT v. Germany 7 p.m. Fox Soccer The American women’s fan tribute tour rolls on, but it does so without Pia Sundhage in charge. Interim coach Jill Ellis gets a test right out of the gate with Germany, the second-ranked squad in the world, taking the field. SUNDAY
QPR v. Everton 10:30 a.m. Fox Soccer Because, really, who doesn’t want to watch Tim Howard? He’ll try to keep a clean sheet against Premier League doormat and keep Everton among the top four at this early stage. BEST OF THE REST
San Jose Earthquakes v. LA Galaxy (Sunday, 7 p.m., Galavision): The Quakes try to lock up the Supporters' Shield while the Galaxy look to improve their playoff position. Tijuana v. Cruz Azul (Friday, 10 p.m., Univision Deportes): Newly cap-tied midfielder Joe Corona plus an American left back of Antonio Mohamed’s choice against one of the big clubs would’ve made the list were UDN in wider distribution. New York Red Bulls v. Sporting Kansas City (Saturday, 7 p.m., MLS Live): Worth watching solely to see if Graham Zusi keeps up his resolute form. Toluca v. Santos Laguna (Sunday, 1 p.m., Univision): Herculez Gomez will hope to see the field against the Red Devils who sit second in Liga MX (behind Tijuana) with a game in hand. NO U.S. ANGLE BUT...
Juventus v. Napoli (Saturday, noon, beIN Sport): These two teams are tied atop Serie A with 19 points heading into the weekend. Valencia v. Athletic Bilbao (Saturday, 2 p.m., beIN Sport): The U.S. fan in you will be scouting Andrés Guardado for the hex. The hipster in you will reflect on how cool Marcelo Bielsa is. Jon Arnold (@ArnoldcommaJon) is a freelance writer based in Phoenix and the co-host of MLS in 30 on NASN.TV.