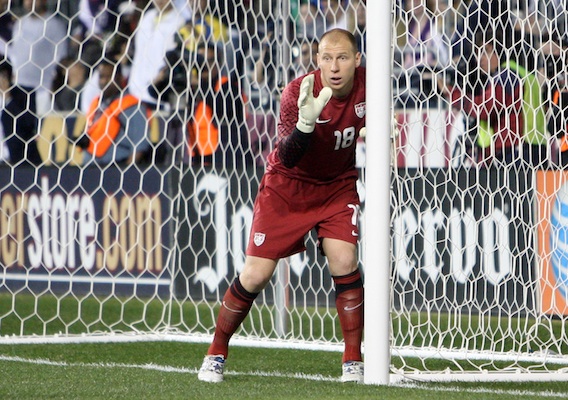 Where Is the Best U.S. Soccer Action? Right Here

American netminders Brad Guzan and Tim Howard top the list of USMNT-related matches to watch this weekend, but there are plenty of other quality fixtures including a key MLS clash.
BY Jon Arnold Posted
October 26, 2012
11:52 AM
This weekend’s TV options are a bit more limited than previous weeks, but it’s not because of a dearth of great matches. Rather, Jozy Altidore’s return from red-card suspension and Danny Williams’ own return from yellow-card accumulation won’t be shown in the U.S. Also, only those lucky enough to have RAI International can watch Michael Bradley and Roma take on Udinese. With that said, there’s still plenty to placate the palette of U.S. fans this weekend. SATURDAY Aston Villa v. Norwich City 7:30 a.m. (all times Eastern) Fox Soccer Brad Guzan’s performances continue to gain acclaim, but he's not the only reason to watch. Eric Lichaj was called into action as a substitute right back in a 1-0 loss to Fulham and could end up starting in Villa’s back line against the Canaries. Schalke 04 v. Nuremberg 11:30 a.m. GolTV Schalke is coming off an impressive victory against Arsenal in the Champions League. Now Jermaine Jones and Co. will try to continue that form in league play. The club welcomes Nuremberg, who employ familiar face Timmy Chandler at right back. Monterrey v. Santos Laguna
7:30 p.m. Telefutura American striker Herculez Gomez scored midweek against Toronto FC, but his task will be taller this weekend. A trip to Monterrey to face the Rayados is on hand. In addition to Gomez, it’s possible that 19-year-old California native Benji Joya will see action for Santos. He came on as a sub in the club’s 4-1 loss against Toluca last weekend. SUNDAY Everton v. Liverpool 9:30 a.m ESPN2, streaming on ESPN3 It’s tempting to overhype derbys, but this Merseyside clash typically yields both a quality match and plenty of clever chants from the stands. Tim Howard will take his usual spot in goal for the Toffees. Sadly, we’ll have to wait a bit before 18-year-old American and Liverpool Academy player Marc Pelosi is in this fixture. LA Galaxy v. Seattle Sounders 9 p.m. ESPN Both teams are securely in the playoffs, but the final MLS game of the year makes for a nice sampling of these squads who each have legitimate hopes of lifting the MLS Cup. Seattle could still nab the second seed in the Western Conference with the right results. Los Angeles left its first team behind for CONCACAF Champions League play this week to prepare for this match and the playoffs. BEST OF THE REST Adelaide United FC v. Wellington Phoenix (Saturday, 2:30 a.m., streaming on Fox Soccer 2 Go): Stay up late (or wake up really early) not only to see Alex Smith in the midfield for the Phoenix, but also to observe the quality of play in a league that has drawn comparisons to MLS. Espanyol v. Malaga (Saturday, 10 a.m, beIN Sport): Oguchi Onyewu saw action in Malaga’s Champions League match and will hope to do the same against Barcelona’s second-most-famous team. Stoke City vs. Sunderland (streaming live Saturday at 10 a.m. on Fox Soccer 2 Go.com, airs at 5:30 p.m. on Fox Soccer): This week provides easier opposition for Geoff Cameron and the Potters who look to bounce back from a poor performance against Manchester United. NO U.S. ANGLE BUT... Chelsea v. Manchester United (Sunday, 11:30 a.m. Fox Soccer, Fox Deportes): The EPL's best battle. River Plate v. Boca Juniors (Sunday, 2:30 p.m., GolTV): The derby. Atletico Madrid v. Osasuna (Sunday, 2:40 p.m., beIN Sport): Two words: Radamel Falcao. What will YOU be watching this weekend? Tell us in the Comments section below. Jon Arnold (@ArnoldcommaJon) is a freelance writer based in Phoenix and the co-host of MLS in 30 on NASN.TV.