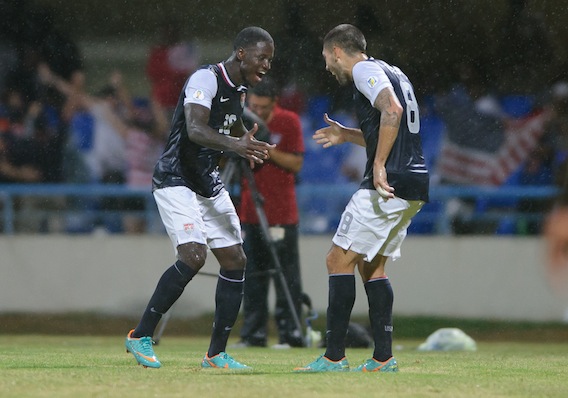 What Were You Thinking at the Final Whistle?

Relieved. Happy. Disgusted. Energized. American fans felt these and many other emotions after the U.S. defeated Antigua and Barbuda. We asked key players what they were thinking the instant the game ended.
BY John Godfrey Posted
October 13, 2012
8:50 AM
ANTIGUA—The United States men's soccer team eked out a dramatic 2-1 World Cup qualifying victory over Antigua and Barbuda at Sir Vivian Richards Cricket Grounds Friday night. It was a close game. Scrappy. Messy. Eddie Johnson's stoppage-time goal changed the entire complexion of the match and the semifinal qualifying group. There was a lot going on, a lot to think about, a lot of data to process.We wanted to know what the players were thinking about when the referee blew the final whistle Friday night. Here's what they told us. Clint Dempsey—ASN 100 Ranking: 1
"It was good. It was a must win. We needed the points. Our work isn’t done. We’ve still got to look at the next game as a must-win. We’re trying to get three points and put ourselves in position to get out of the group. It feels good to get the win but we’ve still got our work cut out for us." Michael Bradley—ASN 100 Ranking: 2
"We were really happy. We’re excited to get on that plane tomorrow knowing that there’s going to be a big-time American crowd [in Kansas City]. It’s a great stadium. It’s a big field. And it’s up to us to take care of things on the field. That’s the kind of pressure we look forward to. Look, after five games in this round, it’s exciting to be able to go to Kansas City and know that a result puts us through to the next round and we’re moving along right on schedule." Geoff Cameron—ASN 100 Ranking: 7
"We should have put the ball in the back of the net earlier. We had a few chances. Their team just kind of sat back a little bit and tried to absorb the pressure, and then waited for the counterattack. We had chances but we needed to shoot a little bit more, maybe draw them out." Carlos Bocanegra—ASN 100 Ranking: 9
"It was big. It sets us up and we’re in a nice position for Tuesday night. The biggest thing was we couldn’t lose. We didn’t have a great game tonight but we got the three points and in the end that’s what matters. It’s difficult to qualify here. This is CONCACAF. They played pretty well tonight. We didn’t play well. Sometimes it’s the conditions. It’s a combination of things. We’re going to leave this game behind us. Don’t think about it anymore. We’ve got to keep our confidence." Clarence Goodson—ASN 100 Ranking: 14
"It’s a good win. Three points is three points. It wasn’t the prettiest in the world but it’s three points. That’s what we needed tonight and we did what we had to do." What are your thoughts on their thoughts? Share your perspective in the Comments section below.