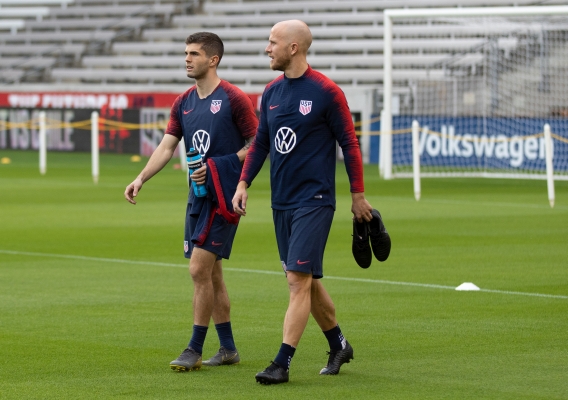 The USMNT is set to host Chile tonight in what will be the team's toughest test under Gregg Berhalter. ASN's Brian Sciaretta previews the game with five things to watch for in the friendly.
BY Brian Sciaretta Posted
March 26, 2019
8:00 AM
THE UNITED STATES national team will faces its strongest opponent yet under manager Gregg Berhalter when it hosts two-time defending Copa America champions Chile in Houston on Tuesday night.

It will be a big test for Berhalter who has seen two of his best players leave camp following Thursday’s 1-0 win over Ecuador. In a move that was preplanned, midfielder/right back Tyler Adams returned to RB Leipzig after a full 90 effort in the win. Meanwhile, midfielder Weston McKennie returned to Schalke after suffering a sprained ankle which should force him out of action for several weeks.

But the absence of some players creates opportunity for other players. Berhalter will be forced to make changes to his lineup.

Will the front three be more clinical?


The United States outplayed Ecuador last week but still only mustered a single goal. Part of this was due to the fact that Ecuador bunkered for long stretches while hoping for a counter attack. But the U.S. team also did not make the most of its chances. Paul Arriola had a good game but saw a golden chance saved – and one he will have to bury in games that matter.

Gyasi Zardes was pretty good against Ecuador but he, along with Jordan Morris, will need better movement in the box to open up the game and create dangerous chances. When Trapp is passing well, Pulisic is in the game, creative movement will lead to chances.

Chile will be stronger than Ecuador but also won’t bunker either. Will the U.S. team be able to create more dangerous chances from its front three?

Who will play alongside Pulisic?


With Weston McKennie out, there will be an opportunity for someone to step up in the midfield.

The problem with replacing McKennie is that he helped the team in a bunch of different areas. On offense he was good with quick passing and winning aerial balls. But it is his defense that will be tougher to replace.

When the U.S team was without the ball, McKennie moved out of the dual No. 10 position and further back into the midfield alongside Wil Trapp – who is an excellent passer but isn’t as strong defensively as many international No. 6 players. There McKennie could be a disruptive force and a ball-winner.

The defensive aspect of what McKennie brought to the game will be harder to replace. Cristian Roldan and Sebastian Lletget are good offensive players but neither can replace what McKennie brings defensively.

Wither it is Roldan, Lletget, or someone else, the game against Chile will be a huge opportunity to build a case to possibly play a big role at the Gold Cup as Mckennie might miss the rest of the season and not be fit for the tournament this summer.

Will Bradley/Trapp be able to open up the game?


Without McKennie in action, the central midfield will have a void defensively. This is compounded by the fact that Tyler Adams has also returned to Germany. With that said, Michael Bradley seems likely to start against Chile because he is better defensively than Trapp and Berhalter will need to find ways to disrupt the talented Chileans.

But regardless of whether it is Bradley or Trapp in the 4-1-4-1 formation, that player will have to take the lead in opening the game up with a longer range of passing. What the friendly against Ecuador and the two January camp friendlies showed is that that role is critical to making everything work. Trapp played well against Ecuador when he hit some outstanding passes from the midfield that played the ball dangerously into wing positions or played Pulisic and McKennie near the box in the middle of the field.

If the U.S. wants to compete against better competition, whoever is in that role will have to be instrumental in hitting key passes, sometimes from a long range. Chile will be a great test.

Will Lima be able to replicate his January form?


Tyler Adams did well in the right back role against Ecuador where he covered a ton of ground and made 116 touches. He was constantly involved.

Now that job will likely fall to Nick Lima (with DeAndre Yedlin likely continuing to play on the wing). The San Jose right back played well the two January camp friendlies where he cut into the midfield created opportunities. The problem for Lima, however, is that his form to start the season hasn’t been impressive. San Jose has struggled and Lima has been at fault for several of his opponents opportunities.

So which Lima will we see against Chile? The player from January camp who looked comfortable and ready for better opponents, or the one at San Jose who has struggled?

Can the midfield/defenders handle the press?


On Thursday, Ecuador was a very passive opponent which conceded possession to the U.S. team and looked for counter attacks. Chile will press a lot harder than Ecuador and it will be a different test for Gregg Berhalter’s team.

For one, the central defenders will not have all day to play the ball into the midfield. Brooks and Long were impressive with their passing against Ecuador – and whether it either them, or Miazga, quick distribution will be key.

The flip side of it is that if the midfield can get through the press, the attackers should have more space to either take defenders on 1v1 or get open to make more dangerous runs.

Tonight’s game vs. Chile will be about quicker decision making and avoiding turnovers. It is an important test.