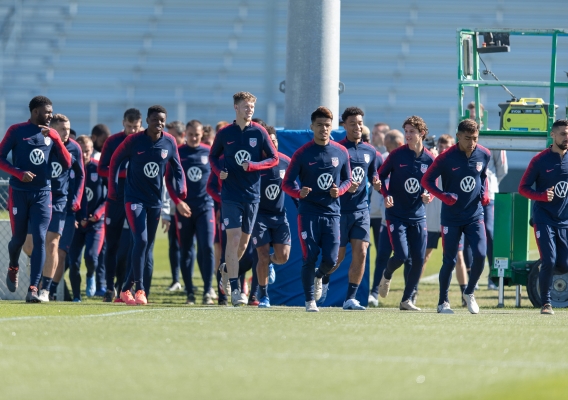 What's are the goals and objectives for the USMNT ahead of Costa Rica friendly?

The USMNT is now in California ahead of Saturday's friendly vs. Costa Rica. ASN's Brian Sciaretta takes a look at the upcoming game, the players to watch, and what the team wants to accomplish.
BY Brian Sciaretta Posted
January 28, 2020
7:00 AM
THE UNITED STATES national team is set to open its important 2020 calendar year with a friendly against Costa Rica on Saturday and head coach Gregg Berhalter, in a conference call with reporters, gave some indication on the team heading into the game.

Of course, Berhalter touched upon the status of a bunch of European-based players who are not at this camp. He mentioned that he sees Tyler Adams as a central midfielder and the emergence of other right backs over the past year (Reggie Cannon, Sergino Dest, etc) will see Adams return to his natural central midfield role – which Berhalter has said he has always seen him primarily.

He also touched upon Christian Pulisic’s recovery from injury adding that the team’s star player is dealing with a difficult Premier League schedule for the first team but “should be back training soon in full training.” He also mentioned how the struggles of Werder Bremen are affecting Josh Sargent and this will be a challenging remainder of the season for him in a relegation fight.

But regarding this team in camp, the general feeling afterward is that young players are going to get a shot. In light of Cristian Roldan and Jordan Morris leaving camp to return to Seattle (along with JT Marcinkowski), the 22-player roster for Costa Rica is going to have a youthful feel. In total, 13 of the 19 field players on the roster are eligible for the U-23 team this year.

"I would expect there to be young players in the lineup, and that's perfectly OK," he said. "They've worked hard all month so far, and it'll be nice to give them an opportunity to perform in front of a crowd in a real international game. This also gives us the opportunity to evaluate some players for the Olympic pool and see if they can if they can make it for qualifying.”

On the roster, Jesus Ferreira is still awaiting clearance from his and it will come down to the wire as to whether or not he is able to play against Costa Rica.

Berhalter also stressed that qualifying for the Olympics is something that he is taking seriously while also stressing that getting players released for the tournament is going to be hard since part of it falls outside the FIFA international window.

The U.S. manager sounded confident that he could get cooperation from MLS clubs (and that USMNT players on MLS teams who are U-23 eligible like Jackson Yueill and Reggie Cannon would play in Olympic qualifying) and that getting star U-23 players like Christian Pulisic, Tyler Adams, Josh Sargent, and Weston McKennie was unrealistic. But the biggest question marks are the releases for European-based players who on reserve teams or on the first teams of smaller clubs (like Christian Cappis, Ulysses Llanez, Richard Ledezma, Alex Mendez, Chris Gloster, or Christ Durkin).

But with a solid U-23 core in place, this friendly against Costa Rica might take a direction of helping prepare for that tournament.


There are different ways which Berhalter can play this game. As mentioned earlier, well over half of the non-goalkeepers on the roster are U-23 eligible. One potential avenue – and one that seems the most likely, Berhalter can take with his would be to start a veteran core, with a few of the U-23 players who could play a full 90, and then sub in the younger players later in the game. That would allow a core of the U-23 team to play together towards the end.

The game is also important for the veterans of the team over the past year – Aaron Long, Sebastian Lletget, Sean Johnson, Paul Arriola, Gyasi Zardes – to provide leadership on a young roster. With World Cup qualifiers approaching in the fall, it would seem likely they’re going to play a role at some level.


Here are the players I am looking forward to most following in this game:

Aaron Long: Most of the veterans on the team are known commodities but Aaron Long is the most interesting player at the moment. Aside from John Brooks, the central defense pecking order isn’t set and Long could very well be a starter on this team when everyone is healthy. But transfer rumors are flying right now and Long has some huge opportunities in the year ahead.

Brendan Aaronson: It’s exciting when a young number 10 emerges and Aaronson had a very good 2019. He was an important reason why Philadelphia qualified for the playoffs. But expectations will be greater for him in 2020. Can he continue to help drive Philadelphia’s offense? Can he do the same for the U-23 team in Olympic qualifying?

Christian Cappis: Like many of the debutants in this camp, Cappis is still a year into his first-team professional career. But he’s shown promise and his year in Denmark has him playing very tactically driven soccer. With size that allows him to play the physical part of the game effectively along with skill on the ball, he gives the U.S. team some of what it is lacking.

Jesus Ferreira: It’s been obviousy for quite some time that the U.S. team needs more forwards. Ferreira only recently turned 19 last month but had a solid season for FC Dallas in 2019 playing forward, wings, and the No. 10. But Ferreira became a citizen in December and still needs his FIFA waiver from its residency requirements on naturalized citizens. If he plays, it will be a big moment for the son of a former Colombian international. But Ferreira could be a big part of the U-23 team’s qualifying effort if he’s cleared to play.

Jackson Yueill: Yueill made big strides in 2019 and deserved his inclusion into the U.S. national team. He also shined San Jose. But in 2020 he will have to begin raise his game even further and make strides to transition from a prospect to a dependable player. Berhalter already hinted that Yueill is expected to be at Olympic qualifying and play an important role. So this camp is important for Yueill to build to towards that.

Brandon Servania: A late inclusion to this camp, Servania had a very strong season for Dallas and was key to the team’s success. Prior to that, he was a starter for the U.S. U-20 World Cup team. Like Yueill, he plays the No. 6 (and also the No. 8) and the U.S. team needs more players who fill this role.