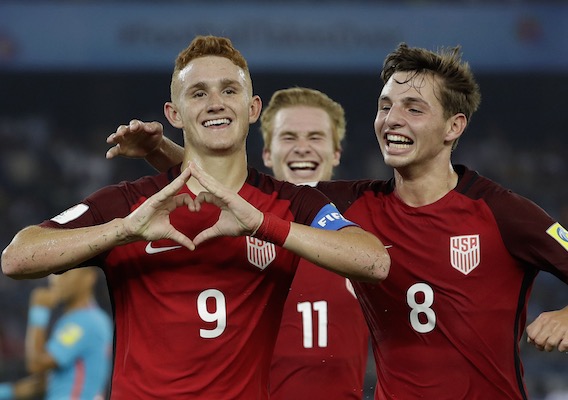 What Does the Future Hold for the US U-17 Teenagers?

John Hackworth's under-17 men's national team lost to a powerful England squad on Saturday, but you haven't heard the last of many of these players—from Josh Sargent to Tim Weah to Andrew Carleton.
BY Brian Sciaretta Posted
October 23, 2017
12:00 PM

THE UNITED STATES U-17 TEAM was eliminated from the World Cup on Saturday after a 4-1 loss to a very good England side. It was a disappointing result as the young Yanks played well for stretches after a brutal start. Overall, the performance yielded more positives than negatives.

There is no question that U.S. youth national teams have improved in recent years after a terrible run dating roughly from 2009 to 2013. After the 2007 U-20 team advanced to the quarterfinals of its World Cup, youth national teams stopped producing quality prospects, and stopped achieving results at the same time.

The 2015 U-20 team changed that narrative for the better and that was continued with the 2017 U-20 team. Now, with the current U-17 team making a run to the final eight, there is plenty of reason for hope.

Still, more work needs to be done. U.S. men's youth teams are still awaiting a team that can make it to a semifinal of a major event. The 1999 U-17 team did that at the World Cup and the 2000 Olympic team also went to the semifinals.

Heading into this tournament the team’s defense was going to have to exceed expectations for a deep run. The powerful offense was not likely to win a series of high-scoring games. After an impressive clean sheet against Ghana, there was no such luck against England.

Much of what was said about this U-17 team before the tournament turned out to be accurate. There was a lot of attacking talent but the defense was indeed shaky despite three clean sheets. The suspension of defensive midfielder Chris Goslin was devastating for the U.S. against England as the Lions were able to pressure the U.S. backline without much support.

Chris Durkin and James Sands appear to be ready for the next level but both are players who split time as defensive midfielders and central defenders. In this tournament, their lack of a set position wasn’t optimal. Hopefully in the near future, both will settle into one position.

U.S. Soccer youth technical director Tab Ramos told ASN before the tournament he was neverous about the team’s defense but excited for this group because it is tougher to get attacking talent than defensive talent.

Now that the U.S. has been eliminated, it's time to evaluate the players'  club situations. It was tough for players at this age to compete for minutes since they are young and were away with the U-17 team for long stretches. But this group will turn 18 next year in 2018. Are they in good situations?

Most of the talk is on Josh Sargent who secured an impressive contract with Werder Bremen. Along with Tim Weah at Paris St. Germain and Sergino Dest at Ajax, they make up the European-based contingent of the current team.

This age group is where Major League Soccer must step up and prove it is a good place for youngsters to play and develop. While there will occasionally be players of Sargent’s quality, most players under 18 will not be able to secure a European deal. As with any country, the large majority of players will start in its domestic league.

Tyler Adams, 18, played more than 2,500 first-team minutes this year with the New York Red Bulls. There needs to be more players who get those kind of minutes at that age. Only when several players can earn those kinds of minutes every year will MLS have turned an important corner in youth development.

These U-17 players showed well enough at the World Cup to prove that they have talent comparable with very good soccer countries at this age. The league needs to give them minutes.

The players to keep a sharp eye on are Andrew Carleton, James Sands, Chris Durkin, and Jaylin Lindsey. All four were big parts of this team and the first three have flirted with first-team action.

If Atlanta United, New York City, D.C. United, and Sporting Kansas City can get these players 1,500 minutes next year, the league will have made a very nice statement.

One of the best things that can be said about the 2017 youth national teams is that they combine extremely well. That bodes well for the U-23 Olympic team as well as the full national team which is set for a long-overdue rebuild.

The 2017 U-20 team was built on an extraordinary central defense which included Cameron Carter-Vickers, Erik Palmer-Brown, and Justen Glad. It had good central midfielders in Tyler Adams, Jonathan Gonzalez (who was there in qualifying), and Weston McKennie, who Schalke did not release. Christian Pulisic was age-eligible but not released.

The 2017 U-17 team, however, was built on quality attackers like Sargent and Weah as well as wingers like Andrew Carleton.

Taken together, the youth national teams are covering most positions with solid prospects. Both fullback positions need to better, the talent production seems to cover a lot of ground.

The United States U-20 team is tentatively scheduled to open its 2019 cycle with a January camp. Then, throughout the year, the U-18 and U-19 teams will also conduct camps.

Many of these U-17 players will move up within U.S. Soccer to new levels. Unlike some previous U-17 teams, most of these players actually deserve to play at older age groups.

Sargent, Carleton, Weah, Durkin, Dest, Lindsey, and Sands look set for the U-20 team right away. Chris Gloster, George Acosta, and Goslin might be close to that level as well although might feature with the U-18 team first.

But no matter what, there is still a lot more to come for most of this crew.