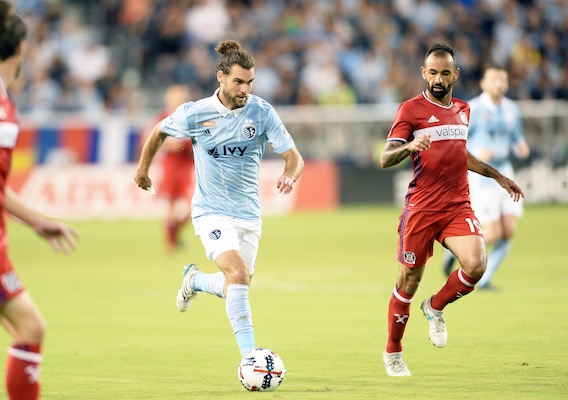 Western Conf. Trio Slugs It Out in MLS Weekend 24

Houston, Seattle, and Kansas City are tied atop the Western Conference, and this weekend's slate of action could go a long way toward determing who finishes first. Also: Pablo Mastroeni gets the boot.
BY Franco Panizo Posted
August 17, 2017
6:00 AM

THE BATTLE FOR SUPREMACY in the Western Conference is as tight as it has been all year, and the three teams jockeying for the top spot are all hoping to move into pole position this weekend.

The Houston Dynamo, Seattle Sounders, and Sporting Kansas City sit in a three-way tie for first place in the west right now. None have games in hand over the other so every match they play from here on out will be important as they attempt to grab the top seed.

Of the bunch, Seattle is in the best run of form. The Sounders edged Sporting KC last week, 1-0, and now have the good fortune of playing at home against a Minnesota United team it shellacked, 4-0, back on August 5. Clint Dempsey stole the show the last time Seattle and Minnesota met. registering two goals and an assist. He stayed hot by netting the winner, and his 50th career Sounders goal, in Week last week's narrow victory over Kansas City. If United is to have any shot at avoiding another rout on Sunday, let alone picking up a result, limiting Dempsey will be the key.

.@Clint_Dempsey's 10th goal of the season and 50th with the Rave Green is your @ALCATEL1TOUCH Play of the Match! pic.twitter.com/bnLr0hTR0W

A day earlier and just north of the border, the Dynamo will try to exorcise their road demons against the Vancouver Whitecaps. Houston has won just once away from home this season but the club isunbeaten in its last three road matches. The Dynamo are also coming off a confidence-boosting 3-0 win against the San Jose Earthquakes that extended Houston’s current undefeated streak to six games—so morale should be high.

Sporting KC will also be in action on Saturday, hosting FC Dallas at Children’s Mercy Park. Kansas City just had its nine-match unbeaten run snapped last week, but the club will be licking its chops since Dallas has hit a three-game slump in which it has netted just once while conceding seven times. Sporting KC’s attack can use all that help it can get right now after being held to one goal or less in five of its last six games.

The Pablo Mastroeni era has come to an end in Colorado.

The Rapids fired Mastroeni earlier this week after seeing the club headed for another bottom-of-the-table finish. Colorado sits 10 points clear of a playoff spot in the west, and its season seems all but over. That said, there is still time for the offensively challenged team to show fans that it can be more proactive than reactive.

A Saturday home game against fellow cellar dweller D.C. United just might be what the doctor ordered. D.C. is winless in eight and has tasted defeat in seven of those fixtures, all while surrendering 20 goals. This is a perfect chance for the Rapids’ current crop of attackers to make a statement—potentially a big one given that the club’s front office will surely be assessing who to keep and who to drop in the months ahead.

ON THE ROAD AGAIN

There's no rest for the weary—just ask the New York Red Bulls.

Three days after coming from behind in dramatic fashion to beat FC Cincinnati on the road in a U.S. Open Cup semifinals bout, the Red Bulls will visit the Portland Timbers at Providence Park on Friday night.

#BWPSAYSYES BWP buries another in the 101th minute to give #RBNY a 3-2 lead! #CINvNY

The match marks New York's third in seven days. Players' legs have to be feeling it after traveling across the country and playing 210 minutes in such a short span. If there was one game for the Red Bulls to sacrifice, it might be this one.

That spells good news for the Timbers, who have been very inconsistent as of late and are just three points above the playoff line. Portland’s shoddy defense was especially poor in a 4-1 loss at Toronto FC last week, so Caleb Porter's men wouldn't mind if Jesse Marsch decides to rest a few starters.

BEASTS OF THE EAST

It's no secret that the Eastern Conference has improved drastically in 2017, and you probably will not have to look beyond the Chicago Fire-Toronto FC tilt on Saturday to get a reminder of that.

Toronto is set to visit Chicago at Toyota Park, and the match has appeal for more than just the potential star power that could be on display. The two clubs are currently headed in different directions, with Toronto FC on a six-game unbeaten run and the Fire having lost four of its last five. Nonetheless, only six points separate them in the standings so there will be plenty to fight for when they collide in one of the marquee match-ups of the weekend.

Chicago needs to rediscover its groove, however. Center forward Nemanja Nikolic has gone ice cold since July and the defense has struggled as of late, and that is not a recipe for success against a Toronto team that is getting major contributions from players all across the field.

If there is one player to keep track of this weekend, it is Ignacio Piatti.

The Designated Player scored two first-half goals, including a splendid curler that came with military precision, to lead the way in the lopsided defeat of the Fire during midweek action. Now, Piatti will aim to build on that performance, extend his current three-game scoring run, and help surging Montreal win its fourth straight vs. Real Salt Lake to try and get back into the playoff picture in the east.