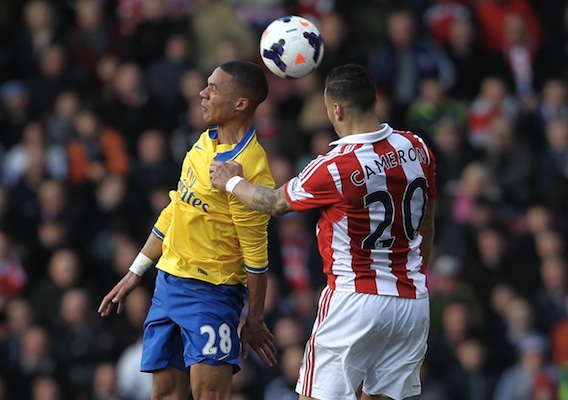 Geoff Cameron helped Stoke City to a massive win over Arsenal. Fabian Johnson continues to demonstrate his versatility. And DaMarcus has a weekend to remember. Brian Sciaretta reports.
BY Brian Sciaretta Posted
March 03, 2014
10:00 AM
HEADING INTO THE INTERNATIONAL break, several key American players stepped up and insisted that Jurgen Klinsmann pay attention. While it's true that Jozy Altidore’s situation at Sunderland is still a concern and it was hardly ideal that Juan Agudelo was an unused substitute for Utrecht, there were a handful of performances worth praising.

When Oguchi Onyewu said that he still had ambitions to make the 2014 World Cup team, most thought he was living in a dream world. But the 31-year-old made a shrewd move to Sheffield Wednesday and, when healthy, is playing every weekend. More importantly, he's also playing well. On Saturday, Onyewu was one of the best players on the field again in a 1-0 win over Middlesbrough. He won just about every ball in the air and showed glimpses of the Onyewu of old. With so many American defenders unavailable for selection, Onyewu has a golden opportunity this week with the national team. Matt Besler, Omar Gonzalez, Tim Ream, and Clarence Goodson are not making the trip. Geoff Cameron may need to start at right back and John Brooks is still not back to starting with Hertha Berlin. It's very possible that Onyewu starts against Ukraine and if he does well, he is certainly back in the mix for a backup defender spot on the World Cup team.

Most players are not likely to admit they had a good game when their team loses 6-3 but Terrence Boyd was solid for Rapid Vienna despite a lopsided loss to a Salzburg team that is running away with the Austrian Bundesliga by a 22-point margin. With Salzburg leading 2-0 just before halftime, Boyd pulled one back for Rapid. On the play Rapid winger Dominik Wydre hit a shot that Salzburg keeper Peter Gulacsi saved but Boyd was able to head home the high rebound. Later in the game Boyd also assisted on a wonder-strike from Thanos Pestos.

When AZ Alkmaar puts on an offensive show, you can pretty much count on Aron Johannsson making the score sheet. But this past weekend AZ dominated RKC Waalwijk, 4-0, and somehow the Icelandic-American did not tally. He did get an assist, however. Johannsson’s helper on AZ Alkmaar’s third goal took a lot of skill as he dribbled around three defenders and hit a streaking Steven Berghuis, who finished with class.
Steven Berghuis by goalsandmore

It was a great weekend for Beasley—maybe the greatest of his life. On Saturday he became a father for the first time with the birth of his daughter. On Sunday he scored the game-winning goal for Puebla in a 1-0 win over Queretaro. As for the soccer part of his eventful weekend, Beasley got on the end of a beautiful cross in the 52nd minute and headed home the game-winning goal.

For the third game in a row, Fabian Johnson started at right back for Hoffenheim and once again it was a success. All game long Johnson demonstrated his skill moving into the attack, breaking down the defense of his former club, Wolfsburg. Johnson’s versatility is a huge asset. He is an effective right back but it is hard to see him staying there next year when he moves onto Borussia Monchengladbach. At Gladbach he will most likely be used in the midfield while serving as a backup at left back. Still, it is nice for a coach to know Johnson can play across the midfield or at either fullback role—and do it effectively.

Stuck near the Premier League's relegation zone, Stoke City needed a result on Saturday against a powerful Arsenal team to bolster its chances of survival. The standings are extremely tight this year, and entering the game Stoke City were just three points clear of relegation and only four points away from 10th place. Stoke put together one of its best wins of the season in a 1-0 victory. For stretches of the game, Stoke had Arsenal on its heels. And Geoff Cameron more than did his part at right back as he managed to get into the attack and control the defensive flank. It was a statement game that Cameron is one of the best American players in the game right now. Brian Sciaretta is an American Soccer Now columnist and an ASN 100 panelist. Follow him on Twitter.