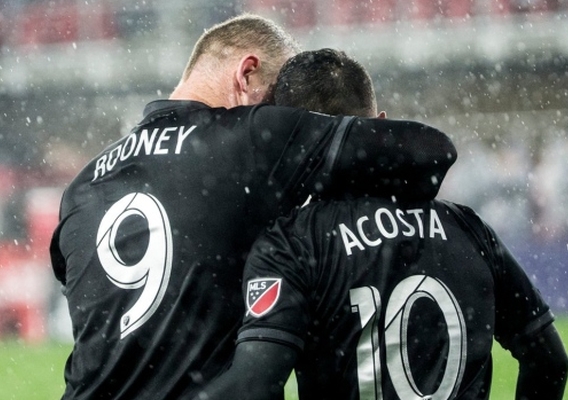 Week 1 thoughts: Who impressed, who didn't, & look at a youth report

The MLS season is underway and ASN's Brian Sciaretta looks at who impressed and who didn't in week one while also giving some thoughts on the top stories from the first 12 games.
BY Brian Sciaretta Posted
March 04, 2019
7:00 AM
THE FIRST WEEK of the 2019 MLS season is in the books and it brought a lot of entertaining games, some bad games, great goals, encouraging signs for some, and disappointing signs for others.

With all that took place, here were my thoughts.


Jordan Morris was the best American player for the weekend with his two goal effort in Seattle’s 4-1 win over FC Cincinnati. To be fair, the first goal was generous and it probably could have been considered an own goal for a deflected pass. But the second goal from Morris was enormous. It was a perfectly placed left footed shot into the top corner. Morris’ left foot was always considered a weakness but shortly before his injury, he looked as if he was working on it.

If he indeed has two powerful feet to shoot and pass, Morris will be a big benefit to the Sounders and should get back to within the U.S. national team as well. Morris had a great rookie season in 2016 and struggled a little bit in his sophomore season in 2017 where he was also dealing with injuries. Then he lost all of 2018. He has slipped from the radar for a lot of national team fans but it might not take very long for him to remind people.

Disappointment of the week: Philadelphia Union


The biggest disappointment of the weekend, by far, was the Philadelphia Union. This was a team that is coming off making the playoffs in 2018 and seemed to have a lot of momentum from the signing of Marco Fabian. While facing a Toronto team that was bad in 2018 and worse in 2019 with the loss of Sebastian Giovinco (and the injured Jozy Altidore for Saturday), Philadelphia lost at home 3-1. This is a Toronto team that just embarrassed itself in the CONCACAF Champions League.

Philadelphia midfielder Haris Medunjanin was particularly bad in his defending in the box which allowed Michael Bradley to be open in the box for two easy goals. Defensive midfielder Derrick Jones wasn’t even in the 18. The Union were also toothless in the attack and simply looked void of a real game plan.

Bad games can happen early in the season. Atlanta lost 4-0 in its 2018 opener. But for Philadelphia, it is particularly sad because the team would probably thrive in the city if it had success. The team has become an afterthought because it hasn’t been able to win a single playoff game in its entire existence.

Winners of the weekend: DC United


Even before this season, if MLS teams were stocks, a sound piece of advice would be to buy a lot shares in DC United. Unlike a lot of other good teams in the Eastern Conference (Columbus, Red Bulls, Atlanta), DC United has had its coach for awhile and lost no significant player in the offseason. When the team added Wayne Rooney and Russell Canouse returned from injury, the team took off. Since then it has only added more key players.

DC United was decidedly better than Atlanta United on Sunday night when it took down the defending champions 2-0. It created better chances and generally limited Atlanta’s powerful attack.

Paul Arriola is the team’s “X-factor” and showcased why he could be one of the league’s best wingers in 2019. His performance also came with U.S. national team general manager Earnie Stewart on hand. Arriola has a complete game that should fit in nicely with the way Gregg Berhalter likes to play. He can defend well and cover a lot of ground. How effective he will be for the U.S. team will come down to how well he can deliver a final ball. He showed a lot of improvement in 2018 but that will need to continue in 2019. Sunday was a positive step.

Chicago Fire impressed in a loss


It’s dangerous to give consolation prizes to teams that lose a game in the regular season but the Chicago Fire deserve that in a 2-1 loss on the road to the LA Galaxy. For one, the Galaxy appear to be significantly improved from last year and should be a playoff contender.

And second, Chicago had a woeful offseason. Matt Polster bolted for Rangers, Brandon Vincent retired at age 24, homegrown candidate Andrew Gutman refused to sign. This all came on the heels of a 2018 season where it disappointed and was not even close to the playoffs.

But Chicago was dangerous and played with the Galaxy in a back and forth game. It took phenomenal individual efforts on the goals from the Galaxy to win. Fresh off of the national team camp, Djordje Mihailovic was impressive in the No. 10 role and goalkeeper David Ousted made one of the best saves you’ll see on Zaltan.

It’s a long season, but if Chicago plays this well on a regular basis, the playoffs might not be out of reach.


The enthusiasm over Efrain Alvarez built up quite a bit in 2018 with the Mexican-American’s success in USL at age 15. With the Galaxy II, he was a true impact performer where he was picking up highlight reel goals and assists nearly every single game.

On Saturday, Alvarez entered the game for the Galaxy in the second half with the score 1-1 and delivered the assist on the winning goal. It was a play that showed a high-level of skill and it showed that at just 16, he is ready to play first-team soccer. Twitter erupted with excitement and a big part of story surrounding Alvarez is his dual nationality.

Born in the United States, Alvarez represented the U.S. youth national teams at an early age but later opted to play for Mexico. For now, he appears to be in the corner of El Tri. American fans are still upset over the defection of Jonathan Gonzalez to Mexico and the potential loss of Alvarez makes it even worse. Unlike the Gonzalez situation, he has not played in an official youth game for either country and can still, in theory, float between the two without having to make a binding one-time switch.

It is a shame that these kinds of matters are so emotional and the loss of top prospects is especially tough for U.S. fans on the heels of missing out on the 2018 World Cup. Frequently American fans have been searching for people to blame whenever there is a high profile defection but these matters are often very personal for a player.

The best way to win over dual national players is to win. To be fair, the U.S. youth teams have been doing that and the U.S. U-20 team in the two-time defending CONCACAF Champions and has had its door open to many Americans of Mexican-decent.

Of course, U.S. Soccer can reach out to Alvarez but in the end, it is the players choice. Alvarez is well aware of the next generation of American players which includes Christian Pulisic, Weston McKennie, Zack Steffen, Tyler Adams, Josh Sargent, etc. Whatever U.S. Soccer can pitch to him is secondary to knowing that those could be his teammates in the future. It having that kid of talent in the pool doesn’t swing Alvarez, then he just wants to represent Mexico.

The Red Bulls have elected to prioritize the CONCACAF Champions League in the season’s opening weeks and as a result, played with only three starters. Columbus, meanwhile, used mostly its 2018 lineup under new manager Caleb Porter.

The game finished 1-1 and the Red Bulls comfortably kept the Crew in check. The only blemish came when Michael Murillo failed to mark his man on a corner. But other than that, the Red Bulls were on cruise control defensively.

New homegrown Omir Fernandez looked lively and drew a ton of fouls. It was a promising first step for the potential U.S. U-20 winger. Also, fullback Kyle Duncan impressed in his first MLS game since tearing his ACL last year.

Columbus should not be happy with the result as it was toothless in being able to take down essentially the Red Bull’s second team.


Overall, it was a pretty good opening weekend in terms of young players getting on the field. Domestically, seven players eligible for the United State U-20 team appeared in the season’s opening weekend. Aside from Omir Fernandez, Colorado midfielder Cole Bassett looks as if he is a player who could be on the verge of a breakout.

Due to a teammate’s red card, Bassett was subbed out early for tactical reasons but Bassett should see a lot of minutes for an improved Colorado team in 2019. Even more impressive is that Bassett is eligible for the 2021 U.S. U-20 team where he could play with Efrain Alvarez (if he opts for the United States).

James Sands, 18, was also another surprise starter on opening day. The defensive midfielder earned the start for New York City and helped the team play to a 2-2 draw. Overall, he didn’t stand out for reasons either good or bad but that is not necessarily bad for a defensive midfielder.

Even more important, however, are the players who are likely to be part of the U.S. U-23 Olympic qualifying team. While players of this age group need to be playing in higher numbers in MLS while also being impact players, there were some encouraging situations.

Djordje Mihailovic will only continue to get better as he gets into a rhythm after missing most of 2018. Winger Jonathan Lewis should also be a key offensive player. Reggie Cannon is a very good right back for his age group and Kyle Duncan might also catch-up quickly with his ACL injury in the rearview mirror. Brooks Lennon will also be a 2500 minute player in 2019 but his offensive production will be key. Avoiding a sophomore slump will be important for Auston Trusty who wasn’t bad in Philadelphia’s opening loss.

Key players to watch this year will be Portland’s Jeremy Ebobisse and Orlando left back Danny Acosta who both started on Saturday in respective draws.