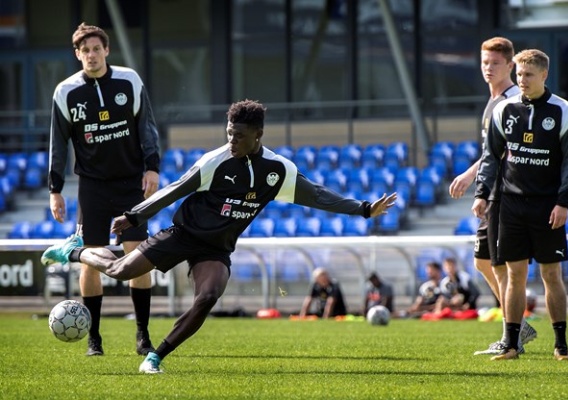 Weah, Sabbi, and Robinson among the many Yanks with a strong weekend

The 2018/19 season is underway in many lower leagues and several American players had great weekends - including recent U.S. national team players Tim Weah and Antonee Robinson. Brian Sciaretta is here to break it down.
BY Brian Sciaretta Posted
August 06, 2018
5:00 AM
IT WAS A big weekend for Americans abroad as many of the lower leagues throughout Europe opened their seasons. Tim Weah, Antonee Robinson, and Emmauel Sabbi were just a few Yanks who stood out.

Here are the top stories from the past two days.


United States national team winger/forward Tim Weah carried the momentum from a strong preseason into the French Super Cup on Friday when he started and scored the third goal of a 4-0 rout over Monaco.

Playing under Thomas Tuchel, the same coach who oversaw Christian Pulisic’s breakout at Dortmund, Weah is looking to do the same. Based on how Weah has responded, it is easy to see him play more than expected. He might not start, but there should be plenty of minutes to go around.


Antonee Robinson, 20, continued his breakthrough year. On Friday, Wigan announced it had acquired Robinson on loan and on Saturday he started against Sheffield Wednesday where he went the full 90 in a 3-2 win. He was dangerous throughout using his blazing speed to get into the attack. Early in the game, he added a valuable assist on the opening goal.


11' @Antonee_Jedi take a bow!!!!!! What a run from the left back - easy 60 yards - crosses left footed and the cross comes out to @mjacobs18, who finishes emphatically!

Last year on loan he was crucial for Bolton’s survival in the Championship and he used that to make an impressive start to his U.S. national team career. Over the preseason, he played well for his parent club in Everton and now he is continuing to build off the success for Wigan.

With his career having nearly ended three years ago due to a knee injury, his rise has certainly been eye-opening.


Credit Lynden Gooch for being loyal. He has been affiliated with Sunderland for over a decade and has played for its first team the last two years as it has suffered two consecutive relegations.

There has been very little to celebrate at the Stadium of Light recently but Gooch gave them that reason on Saturday in the League One opener against Charlton Athletic. With the game tied 1-1 in the sixth minute of stoppage time, Gooch came up huge and found the winner. More than just that, the Santa Cruz native had a very good game – which he played from the start.

Josh Gatt will turn 27 at the end of this month and his career has been on a rough slide in recent years. He’s missed a ton of time with three ACL surgeries and his stint in MLS did not go well. Over the off season, his wife received a cancer diagnosis and had to go through chemotherapy to fight the lymphoma.

But Gatt is still well-regarded in certain areas of Europe and recently rejoined his first ever club – RSC Altach. Altach was in the second division in Austria when he signed in 2011 but is now in the Austrian Bundesliga.

Gatt made his first appearance of the season on Saturday when he came off the bench in the 57th minute and delivered the equalizing assist in the 88th minute to help Altach to a 1-1 draw against Rapid Vienna.

After all he has been through, it is a great story to see him have some success.


2016/17 was a lost season for Emmanuel Sabbi who only trained with the Columbus Crew after his move to Spain was hampered by a failure to get a work permit and as a result, he was not sharp for the U.S. U-20 team either at the World Cup or in qualifying.

But towards the end of the 2017/18 season, he began to breakthrough with Hobro in the Danish Superliga. Now to start the season, he is playing well and on Saturday, he scored his second goal in four games to open the season as Hobro drew Horsens 2-2. Hobro is struggling and is winless, but Sabbi has played well.


There have not been many young American natural forwards to breakthrough either domestically or abroad at the foreign levels so Sabbi’s nice start is good. At 20 years old, Sabbi might play himself into a good position with the U.S. Olympic team in the years ahead if he keeps it up.


Duane Holmes, 23, has probably outgrown League One but he is still in the league to start this season with Scunthorpe – where last year he was considered the team’s best player.

On Saturday, he delivered this quality second half assist to equalize the game against Coventry at 1-1. Scunthorpe would eventually win it at the end.