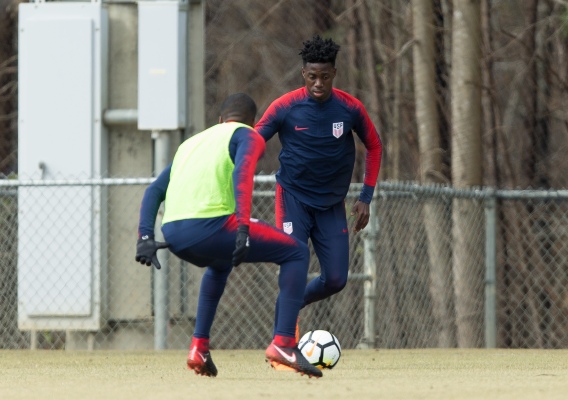 Weah and Nagbe's Liberian roots unite with the USMNT

Tim Weah's first call up to the United States national team was special not just for the chance to represent his country internationally, but to also establish a connection with Darlington Nagbe. While Joe Nagbe and George Weah were legendary teammates for the Liberian national team, their sons are hoping to have a big impact together with the USMNT
BY Blake Thomsen Posted
March 26, 2018
12:00 PM

CARY - N.C. - Like many teenage American soccer players, Tim Weah grew up idolizing USMNT stars such as Tim Howard and Clint Dempsey, who Weah himself describes as “legends of this team.” But over the past few years, the 18-year-old winger has also been closely following the progression of a lesser heralded U.S. player: Darlington Nagbe.

The reason? Weah and Nagbe’s deep family connection. The roots of which began on another continent with another national soccer team, over thirty years ago.

To find the beginning of the Weah-Nagbe soccer connection, one must travel to the west African nation of Liberia, where Weah and Nagbe’s fathers starred together for the Liberian national team for the better part of two decades. George Weah, now the president of Liberia, was a world-class striker who won the 1995 Ballon d’Or while playing for Italian power AC Milan. Joe Nagbe was a commanding defender who had a lengthy career in Europe and earned 97 caps for Liberia.

Together, the elder Weah and Nagbe helped Liberia qualify for the nation’s only two African Cup of Nations appearances, in 1996 and 2002. Remarkably, their sons are now teammates for the U.S., and the younger Weah is delighted to be continuing the Weah-Nagbe connection.

“Even when I didn’t know Darlington personally,” Weah said, “I’ve always had that type of connection with him because my dad always used to talk about his father. So it was a dream to come in and play with him, and that dream came true.”

Though the younger Weah and Nagbe had never met before camp this week, the two have forged a quick friendship, following in their fathers’ footsteps.

Now that the pair has joined forces with the U.S. national team, it is their turn to start building their own collective legacy. But despite the similarities of their family's roots with the Liberian team and their current status on the U.S. team, the two come from very different backgrounds

Nagbe, a 27-year-old midfielder, has been a known commodity in U.S. soccer circles since he burst onto the MLS scene in 2011. While one of the most visible and recognizable players in the league, his childhood was at times very difficult.

Born in Liberia during a civil war, Nagbe did not leave for Europe when his father signed to play in France. Instead, he stayed behind with his mother.

"It was a really difficult time, especially for my mom," Nagbe said in 2015. "I hear a lot of stories about the time my dad left to go to France to play. My mom hadn't followed him yet, and then the war broke out. At nights, she was hearing gunshots, and there was no electricity. My older brother was three, and she was pregnant with me. She had to find someone to deliver me and was getting help from rebels. They managed a way to stay together, stay alive, and flee the country."

After following around Joe Nagbe in his journeyman career throughout Europe, Darlington, his mom, and siblings moved to the United States and settled in Ohio when Darlington was 10. It wasn't until 2015 when he became an American citizen but he did not have to wait nearly as long to become a U.S. international as head coach Jurgen Klinsmann gave him his first cap on November 13, 2015 for a World Cup qualifier against St. Vincent and the Grenadines.

"Moving here when I was 10," Nagbe said in the 2015 New York Times piece, "I didn't really know too much. All I knew is that my mom moved here for me to get an education and live our lives here. The closer I got to citizenship and I got older, I realized why it was important for my mother."

Weah, on the other hand, is far less established at the senior level but has earned a reputation as one of the top young American players as a key player for U.S. youth national teams. In fact, his senior national team debut could come against Paraguay – a country against which he scored a hat-trick at last year’s U-17 World Cup.

Unlike Nagbe, the younger Weah was born into a far more stable environment in New York and raised between New York and Florida. Similar to Nagbe, however, he is taking pride in representing the United States for the first time at the senior level.

It is a strong statement from Weah, whose club is none other than Paris Saint-Germain where he recently made his first team debut. It’s the same club where his father was a star from 1992–1995 and has become one of Europe’s biggest spending teams.

“Playing for your country is everything you wanted ever since you were growing up as a little kid,” he continued. “Being here is really important to me so if I come out and make my debut, I am going to put everything I have into it.”

If Weah does take the field tomorrow night, especially if he does so alongside Nagbe, it would be an incredibly special moment. Thirty years, divergent childhood paths, and a continent away from where their fathers began their legendary partnership on a different national team, the hyounger Weah and Nagbe are ready to start forging a legacy of their own with the stars and stripes.