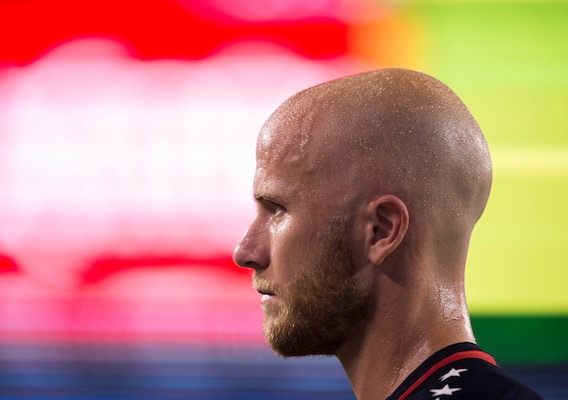 Veterans Lead the Way as Yanks Move to Semifinals

PHILADELPHIA—The U.S. men's national team advanced to the semifinal of the 2017 Gold Cup after an ugly 2-0 win over El Salvador. The game was tough to watch as it was chippy, poorly officiated, and downright dirty at times. It was a perfect display of an unappealing version of soccer that has become all too common in the CONCACAF region.

The U.S. still made too many mistakes but was unquestionably the better team on the night. Moving forward it will need to get more production out of its forwards as both goals came from defenders.

That said, winning in CONCACAF is never easy with its often dirty style and this will help the team the rest of this tournament and into the latter stages of World Cup qualifying.

Tim Howard: The long-time veteran came up with a big save in the fourth minute after a terrible breakdown from Eric Lichaj. Overall, Howard was there whenever the team needed him. Rating: 7

Justin Morrow: The Toronto left back saw a lot of touches in the first half although did not stand out trying to get forward. Defensively he answered most of the times he was tested. Rating: 5

Matt Hedges: The FC Dallas captain had too many mistakes. He was lucky not to concede a penalty in the 12th minute he coughed up another bad chance in the 50th minute and was in no-man’s land on El Salvador’s best chance in the 59th minute. Tougher teams will make him pay. Rating: 4.5

Omar Gonzalez: He won physical battles early and brought a solid presence to the backline. He scored off a set piece and, aside from a defensive miscue in the 63rd minute, he controlled aerial game in the box—which he should do. Rating: 7

Eric Lichaj: The Chicago native had a bad start when he almost cost the U.S. team an early goal with a horrible backpass. But he settled down and redeemed himself with a great run and finish for the Yanks' second goal. He showed his upside but needs to avoid errors. Rating: 6.5

Gyasi Zardes: The LA Galaxy winger should have had a great chance but his nice run in the 18th minute was incorrectly ruled offside. He was generally involved and active. Aside from a few turnovers and times where he dribbled into trouble, he had a good game overall. Rating: 6

Michael Bradley: The captain was a welcome addition to the U.S. team’s midfield and helped shield the backline well and settle the team down after a rough start. He provided a nice assist on Gonzalez’s goal and his set piece deliveries gave El Salvador problems. He did well to maintain the U.S. team’s superiority of the game. Rating: 7

Darlington Nagbe: He didn’t provide much defensively as there were times El Salvador was able to move easily though the middle of the field, especially early on. But his technique and movement with the ball were first class. No other player on the ball was as comfortable as he was. Rating: 6.5

Paul Arriola: The Club Tijuana winger was slow to get involved but eventually found his way into the game and became very involved in the first 20 minutes of the second half before coming off. Rating: 6

Jozy Altidore: This was an ugly, physical game and Altidore held up well on that front—even to the point where he was bit by Henry Romero in the second half. He had a few chances to get on the scoresheet but wasn’t able to do so. Still, the ability to fight through a dirty opponent and hold the ball up was useful. Rating: 5.5

Clint Dempsey: The Texan did not tie Landon Donovan’s scoring record but had a nice game. He had good shots saved in the 19th and 76th minutes but his best moment came when he provided a highlight reel assist on Lichaj’s goal. Rating: 6

Jordan Morris: The Seattle native came on for Arriola in the 65th and tried to make some plays using his speed but overall he was part of nothing dangerous. Rating: 5.5

Kellyn Acosta: The Dallas native replaced Zardes in the 70th minute and had a few nice touches on the ball, clogging up the middle of the field defensively. Overall, he did not have much to do. Rating: 5.5

Chris Pontius: The Philadelphia Union man came in late and did not do anything of note. Rating: NR

Bruce Arena: Arena went with a mostly experienced team for this game and it was the right move as an ugly, dirty game might have flustered a young group. This team was focused and prepared. After a slow start, the Yanks were able to settle down and get the job done. Sometimes a coach needs to pick guys who can fight through tough circumstances. It wasn’t pretty or exciting but Arena made the right decisions to secure the win. Rating: 7