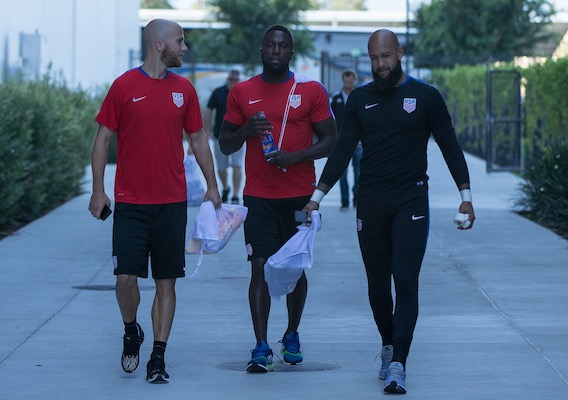 Veterans, Defensive Fill-Ins, Will Be Asked to Deliver

With John Brooks and DeAndre Yedlin sidelined with injuries, U.S. national team coach Bruce Arena will need his veterans to step up and deliver results against Costa Rica and Honduras
BY Brian Sciaretta Posted
August 27, 2017
3:00 PM

BRUCE ARENA unveiled his roster on Sunday for the upcoming World Cup qualifiers against Costa Rica and Honduras. As expected, the roster relied heavily on experience, with every player having spent time with the team in 2017.

Since taking the job last November, Arena has been conservative with his roster selections and has only gradually expanded the player pool. That approach as worked very well for him so far with the team having significantly improved its standing in World Cup qualifying as well as being crowned champions of CONCACAF after winning last month’s Gold Cup.

So it should come as no surprise Arena selected a roster that was familiar to him. The upcoming games are challenging and will likely determine if the U.S. can qualify outright in October or will, at best, be forced into a playoff in November.

Should the U.S qualify in October, the door could open again for new players in the November friendlies, January camp, and the March 2018 friendlies. As it stands now, the Gold Cup was the first time for Arena to expand his player pool and Matt Hedges, Dax McCarty, and Cristian Roldan took full advantage.

As camp is set to open in New Jersey, here are some thoughts on the roster in how it will relate to the games ahead.

Injuries shake up the backline

The two biggest injuries on the team are to starting defenders John Brooks and DeAndre Yedlin. That leaves Arena with several questions as to how the backline will shape up.

The two right backs in camp are Graham Zusi and Eric Lichaj. It is worth pointing out that Timothy Chandler did not get the call again after withdrawing from his first Arena call-up in May. It is unclear where the Eintracht Frankfurt fullback stands with Arena but his absence suggests that he is behind the others right now and if he gets a call up later in the year or in early 2018, he will have to play well and translate his club performances to the international game.

As it stands right now, Zusi is the likely starting right back. The Sporting Kansas City mainstay was the starter for the semifinals and the finals of the Gold Cup over Lichaj. Also, Lichaj has lost his starting spot to start the season at Nottingham Forest.

Geoff Cameron is the only lock starter right now on the backline and he arrives in camp after a first-rate performance against Mexico at Estadio Azteca. But with John Brooks ruled out for three months with a thigh injury, it is not certain who will partner with Cameron in the backline.

The top two candidates to start alongside Cameron are Matt Besler and Tim Ream, who both have strong cases. Ream is off to a strong start to the season with Fulham and has been ahead of Besler most of the year. Besler however has more national team experience starting in a World Cup and two Gold Cup-winning teams. Of course if Arena wanted to go with two-right footed centerbacks, Omar Gonzalez is an option.

At left back, as expected, it will come down to Jorge Villafana and DaMarcus Beasley with Fabian Johnson as a possibility.

Arena has every right to feel confident heading into camp despite the two key injuries in the back. Right now there are several key players in good form at the moment.

Michael Bradley and Jozy Altidore are both on top of their game as Toronto is by far the best team in MLS at the moment. Both players also had good performances in the knockout stages of the Gold Cup. Likewise, Darlington Nagbe has been making some eye-opening plays for Portland that should have him arriving in camp full of confidence.

Christian Pulisic and Bobby Wood have started well in the Bundesliga and that will boost the attack. Pulisic is emerging as one of the top teenagers in Europe right now and Wood has helped Hamburg off to a surprisingly successful 2017-18 campaign.

But there are concerns. Kellyn Acosta has been rising with the national team in 2017 but had an uneven Gold Cup; his performance in the final was disappointing. His form at FC Dallas since the Gold Cup has also declined since the start the season.

Aside from Acosta, another concern is Fabian Johnson who did not perform well his last time with the team in June and who has seen his minutes drop at Borussia Monchengladbach.

Arena has wealth of formations to try

With his top players available, Arena can toss out a bunch of different formations over these next two contests.

He showed in Mexico that he is willing to try a five-man backline in big moments. The three-man central defense unit of Geoff Cameron, Omar Gonzalez, and Tim Ream all looked comfortable in that match. Even if he does not use that lineup against Costa Rica, it could be an option away against Honduras.

There are also one- or two-forward formations to consider. With Dempsey having a lot of value off the bench, Altidore and Wood seem likely to start.

The players on the roster also open the door to a narrow diamond midfield with Bradley at the base and Pulisic at the tip. That would allow Nagbe as an outside midfielder to push centrally along with either Acosta or Alejandro Bedoya.

Finally, a 4-3-3 or 4-2-3-1 could also work, given wingers like Paul Arriola or the ability of Jordan Morris to also play out wide.

Arena will need to make sense of the forward formation. While Chris Wondolowski made the team, the top four forwards are Wood, Altidore, Dempsey, and Morris.

But Altidore and Wood seem most likely to start and it remains to be seen if those two can be effective together. Wood plays mostly as a lone forward for Hamburg whereas Altidore is partnered with a very talented and quick Sebastian Giovinco in Toronto. Playing together would be something of a deaprture for both.