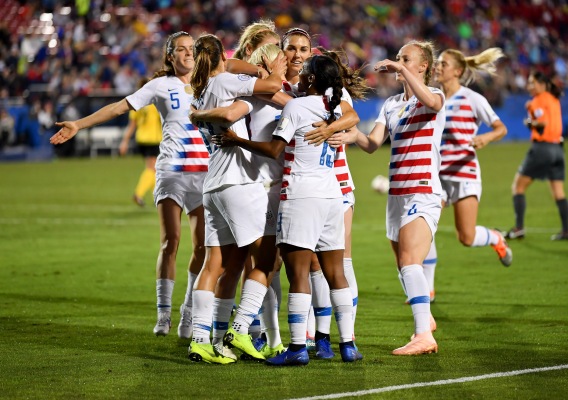 USWNT through to the World Cup with convincing win over Jamaica

The United States women's national team is through to the World Cup following a 6-0 rout over Jamaica in Texas. ASN's John Halloran is here with the latest.
BY John Halloran Posted
October 15, 2018
11:00 AM
THE UNITED STATES women’s national team is heading to the World Cup. With a 6-0 victory over Jamaica in the semifinals of the 2018 CONCACAF Women’s Championship in Frisco, Texas on Sunday night, the team has officially secured a berth in next summer’s tournament in France.

The Americans struck early and often against Jamaica with Tobin Heath putting the U.S. on the board only 101 seconds into the contest. Megan Rapinoe notched another in the 15th minute on a nice top-shelf effort and Julie Ertz added a third only six minutes later on a header. From there, Heath scored again and Alex Morgan added another as the U.S. went into the locker room at the half with a 5-0 lead.

In the second stanza, Morgan added a sixth from the spot to create the final scoreline.

The U.S.’ success in the qualifying tournament this month is as much a testament to their outstanding recent form as it is an indictment of the lack of investment among the majority of CONCACAF federations. The Americans finished the group stage with a +18 goal differential, a 5-0 win over Panama their closest competition.

Outside of the U.S. and Canada—the two teams that will meet in Wednesday’s final—the rest of the teams in the tournament built their rosters primarily from a collection of inexperienced college players and semi-professionals completely unprepared to compete against more seasoned internationals.

CONCACAF itself showed how little regard it holds for the women’s game simply in the ridiculous set-up it created for World Cup qualifying. The entirety of this tournament takes place over 14 days and teams making it to the knockout rounds are forced to play five matches in that span. In the all-important semifinal round, in which teams can earn a guaranteed place in the World Cup, the matches would have gone straight to penalties if the score had been tied after 90 minutes.

Under such conditions, it’s hard to say the U.S. or its fans learned much from the tournament. That said, Wednesday’s match against Canada—which officially means nothing with both teams having already qualified for the World Cup—should still be a good test for the Americans.

One small surprise through the CONCACAF Championship was Jill Ellis’ consistent inclusion of Rose Lavelle in her first-choice starting XI. Lavelle impressed in the Tournament of Nations this summer after a long injury layoff and her creativity in the midfield proved key in this most recent tournament, especially against teams which largely bunkered against the U.S.

Whether Ellis continues that trend against more competitive teams remains to be seen, as Sam Mewis could provide a more physical presence against stiffer opponents.

Kelley O’Hara also took back her place at right back this month after her own long injury layoff this summer. With Crystal Dunn solidifying the starting job at left back over the past year, the U.S. now has two speedy, attack-minded fullbacks in their starting lineup.

Only 21 minutes in and it looks like the USWNT will take care of business tonight. pic.twitter.com/7jAtyG7Gvx

While the competition in this tournament has been far from ideal, the American attack has still impressed with its positional interchange in possession through its first four games. Heath and Rapinoe have frequently cut inside, leaving Dunn and O’Hara to overlap on the attack. Midfielders Ertz, Horan, and Lavelle, have moved well to find open space and covered for each other defensively like a trio that’s been playing together for years.

The U.S. center back combination of Abby Dahlkemper and Becky Sauerbrunn have also defended counterattacks well throughout the tournament, something that has at times over the past year been a weakness. Injured Tierna Davidson may still have a say at who starts in the middle of the defense next summer in France, but Dahlkemper and Sauerbrunn have gotten the job done against a series of speedy, if unpolished, CONCACAF attackers.