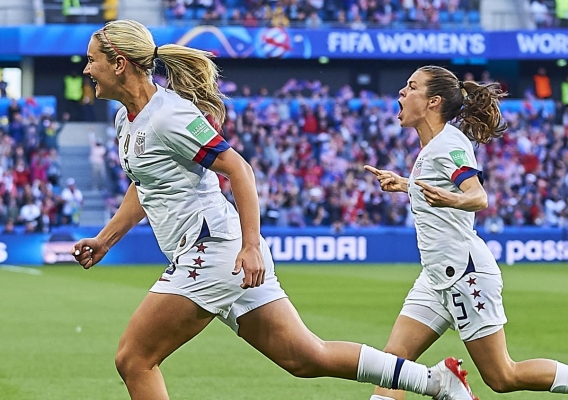 The United States will head into the knockout stages after a 2-0 win over Sweden gave it a perfect nine points from group play at the Women's World Cup. ASN's John Halloran was in Le Havre for the game.
BY John Halloran Posted
June 20, 2019
5:00 PM
LE HAVRE – In its final match of group play in the 2019 World Cup, the United States women’s national team beat Sweden 2-0 in front of 22,418 fans at Stade Oceane.

Head coach Jill Ellis largely returned to her preferred starting lineup in the contest, with the only exception being Sam Mewis slotting into the midfield for an injured Julie Ertz.

The Americans started the match quickly when Lindsey Horan tallied off a U.S. corner kick in only the 3rd minute of play. Megan Rapinoe fired her service low towards the near post and Mewis flicked the ball across the face of the net for Horan to slot home from close in.

For the rest of the half, both teams maintained a high tempo, trading blows with neither side landing one. Sweden nearly got in behind in the 13th minute when Becky Sauerbrunn got caught high. Two minutes later, a Rose Lavelle giveaway gave Sweden another opportunity.

The Americans were next to come close in the 18th minute when Alex Morgan got in behind on a beautiful ball from Mewis. However, the chance went wanting. In the 21st minute, the ninth-ranked Swedes managed a shot on goal when Sauerbrunn, this time, got caught not stepping which then forced Dunn to get stuck too central and opened up space on the flank. Two minutes later, the U.S. managed a chance for themselves when Megan Rapinoe fired one into the side netting off a through ball from Lavelle.

In the 32nd minute, Lavelle shot over the goal from the top of the 18 and a Kelley O’Hara service forced a punch from the Swedish keeper only a few seconds later. Then, Tobin Heath fired over the net in the 38th minute.

Near the end of the half, the Swedes managed two more chances. The first came in the 40th minute when Dunn gave the ball away just outside the area. Then, in stoppage time, a giveaway from Lavelle resulted in another counter. That sequence resulted in a nice service from the flank which Alyssa Naeher dove for and managed to punch away.

At the half, Ellis made once change, putting in Carli Lloyd for Morgan.

Just after the break, the Americans started just as quickly as they had in the first half. This time, Heath took a service that found its way to the back post, cut past her defender, and fired a beautiful service over the goalkeeper and into the far post. After a VAR review which seemed to show Lloyd in an offside position affecting the initial service, the goal was allowed to stand.


2-0 USA!@TobinHeath scores from a tight angle and the goal stands after a lengthy VAR review. #FIFAWWC https://t.co/DRpsL3v9wP

In the 54th minute, the Swedes nearly worked their way back into the contest when Kelley O’Hara got turned on the flank. The Swedish attacker then cut O’Hara back as she overcommitted on her recovery run and got off the shot, but Naeher proved up to the task again.

With 27 minutes to play, Ellis made her second change on the night, slotting in Christen Press for Rose Lavelle and Mallory Pugh joined the contest with eight minutes left, coming on for Megan Rapinoe.

Overall, the final 30 minutes of play resulted in few chances—save an excellent opportunity for Lloyd via a Mewis through ball—as both sides seemingly content with the scoreline and their places in the knockout round already secured.