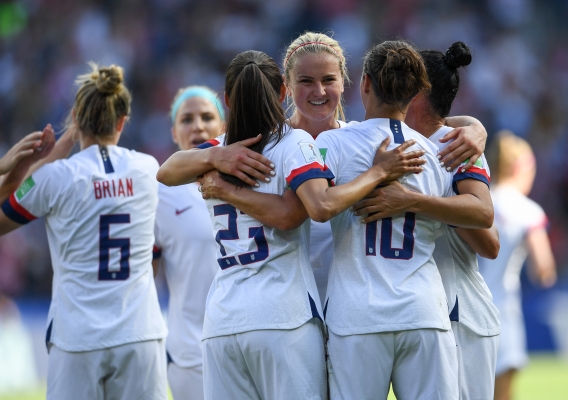 The USWNT continued its perfect start at the World Cup following a 3-0 win over Chile on Sunday and Paris. In addition to six points, Jill Ellis was able to rotate her squad for the second game of the tournament. ASN's John Halloran was in Paris for the game.
BY John Halloran Posted
June 16, 2019
11:00 AM
PARIS – The United States women’s national team defeated Chile 3-0 on Sunday evening in front of 45,594 fans at the Parc des Princes in the team’s second match of group play in the 2019 World Cup.

The Americans opened the contest with a repeated series of smart passing combinations and got on the board in just the 12th minute of play. Abby Dahlkemper lofted a long service from near the halfline into Chile’s penalty area which they did manage to head away. Unfortunately, the ball fell directly into the path of Carli Lloyd—waiting near the top of the 18—and the forward smashed home a volleyed effort to give the U.S. an early lead.

Dream start for the USA! pic.twitter.com/txYUkQTCTN

However, the Americans nearly gave one back just as quickly. Only 10 minutes after Lloyd’s goal, Tierna Davidson fouled a Chilean attacker as the two fought to win a long pass. On the ensuing free kick, Alyssa Naeher completely missed the service into her area and the ball ended up in the back of her net. Luckily for the Americans, the assistant referees flag went up for offside and the goal didn’t count.

Then, in the 27th minute, the U.S. struck again, this time after Mallory Pugh earned a corner kick. Davidson put in the service and Julie Ertz—making her trademark near-post run—headed the ball in for the tally.

She scores her 1st career #FIFAWWC goal to double the @USWNT lead! pic.twitter.com/S2DpnurNdf

Eight minutes later, the U.S. picked up their third and final goal of the match. Some individual magic from Christen Press resulted in a shot that deflected out for another corner kick. Davidson again took the serve, this time finding Lloyd who headed the ball in for her second on the night.

At the break, Ellis made one change, subbing on Jess McDonald—who made her World Cup debut on the night—for Ertz.

In the second half, the United States continued to dominate play, but wasn’t able to add to their goal total as the 39th-ranked La Roja Feminina put up a stern defense. In the interim, Press, Pugh, Horan, Lloyd, and McDonald had chances—some more than one—to add to the lead, but either had their shots blocked, fired them off the post, or had their efforts saved outright as Chilean keeper Christiane Endler made a series of diving stops.

Press herself had four chances to add to the American lead and put them all of them on target, including a beautiful full volley. Endler proved up to the task each time and would go on to win Player of the Match honors. Horan saw two good opportunities in the 55th minute, but saw neither ended up in the net. Later, McDonald went off the post in the 62nd minute and Lloyd missed a penalty in the 78th.

The U.S. plays their final game in group play against Sweden next Thursday in Le Havre (3 p.m. ET, FOX).