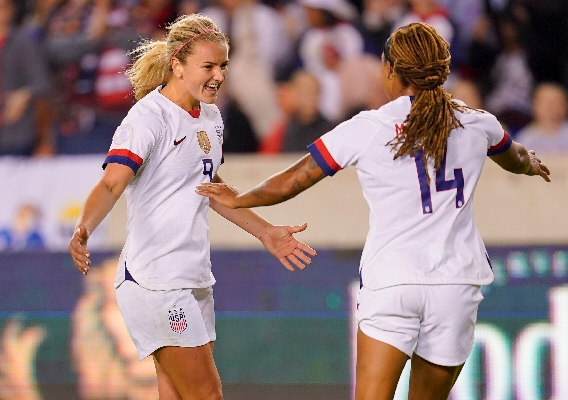 The USWNT has clinched advancement out of Group A of Olympic qualifying after a 8-0 romp over Panama. John Halloran is here with his report.
BY John Halloran Posted
February 01, 2020
9:05 AM
THE UNITED STATES women’s national team took one step closer to qualifying for the 2020 Tokyo Olympics on Friday night, beating Panama 8-0 and guaranteeing advancement out of Group A.

The U.S. got off to a quick lead in the contest, racking up four goals in the first 20 minutes of play and cruising to the win.

From the start, the team demonstrated a much higher level of play than in Tuesday’s opener, this time stringing together solid passing combinations that repeatedly took advantage of Panama’s naively high defensive line.

In only the third minute of play, Sonnett found Rose Lavelle, who put McDonald in behind the defense on the right flank. McDonald’s service then popped out to Horan, who was rewarded for her run into the box with an open chance. She put it away and established the early lead.

Thirteen minutes later, the U.S. again tallied, this time on arguably the prettiest combination of the night. Sullivan found Horan in the middle of the park, who then used a slick outside of the boot one-touch pass to slide Lynn Williams in behind. The striker touched the ball around Panamanian keeper Yenith Bailey, took a moment to compose herself, and slotted home on the empty net.

From there, the U.S. scored two more times in the next five minutes, with Horan scoring again from close range to make it 3-0. Three minutes after that, Horan found herself involved yet again. This time, she put Williams in behind, who cut the ball back, and fed Lavelle in front of net for a 4-0 lead that would go unchanged into the half.


Lynn Willams plays a fantastic ball to Rose Lavelle who makes it 4-0 for @USWNT!#CWOQ #WeBelieve pic.twitter.com/JI3tQJBxkE

In the second stanza, it was more of the same with second-half substitutes Christen Press and Tobin Heath getting into the act, scoring on each side of another tally from McDonald to make it 7-0. Press’ goal came on a nice header and Heath scored a no-look finish after being fed in behind. Then, in the 81st minute, Horan finalized her hat trick to make it 8-0 and create the final scoreline.

All in all, it was an anti-climatic result, but the Americans looked markedly better than in their first group-stage match against Haiti. The midfield trio of Sullivan, Horan, and Lavelle repeatedly turned simple passes from the backline into scoring chances for the forwards in impressive fashion. And not only did the team get off to a quick start—like they had on Tuesday night—they also put the hammer down this time, extending the lead quickly and unassailably.


Has the chef's kiss emoji been released yet?

Asking for a friend. pic.twitter.com/MY1kxoZWxP

Yes, the finishing did get sloppy after the U.S. went up 4-0, but a lack of concentration at that point can be forgiven considering the result was already decided.

Although the Americans have already earned a berth in the semifinal round, they still have one more match in group play on Monday against Costa Rica (8:30 ET, FS1).