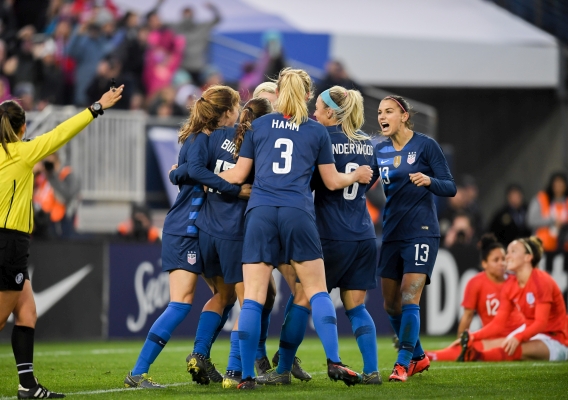 The USWNT is off to a rough start in the SheBelieves Cup. As its did in its opener, the USWNT was unable to hold a lead and control the game. In the end, the USWNT played England to a 2-2 draw for its second straight draw to open the tournament.
BY John Halloran Posted
March 03, 2019
4:00 PM
IN A DISJOINTED, haphazard performance, the United States women’s national team fought to a 2-2 draw against England on Saturday afternoon in its second match of the SheBelieves Cup.

Only three days after surrendering two separate leads against Japan in the tournament’s opening contest, the Americans once again couldn’t hold an early advantage and, on Saturday against the English in Nashville, even fell behind before ultimately earning the draw.

With Lindsey Horan missing through injury, U.S. head coach Jill Ellis once again opted to start Mallory Pugh in the center of midfield, and once again passed over Sam Mewis.

In the absence of starting goalkeeper Alyssa Naeher—out with a shoulder injury—the coach also gave a first, and long-awaited, cap to Adrianna Franch in the net.

Early in the match, both teams struggled to establish a rhythm, but the Americans managed to get on the board first through a superb effort from Megan Rapinoe.

On the play, Kelley O’Hara made a surging run forward and lofted a high service into the box. English defender Rachel Daly got to the ball first, but her headed clearance popped right to Rapinoe at the top of the box. The American winger then fired home the half volley into the upper 90—as English goalkeeper Karen Bardsley could only stand and watch the ball fly by—to give the U.S. the lead in the 33rd minute.


The USWNT settled for a tie against England, but OH MY GOD what a goal this was from @mPinoe ????????pic.twitter.com/UVi1NNjrOb


Only seconds later, however, a defensive miscommunication led to Franch picking up a back pass and gifting England an indirect free kick inside the area. On the set piece, the English worked a small space for captain Steph Houghton, who then buried her chance with an excellent curling strike into the side netting to level the game.

Shortly after England tied the match, the U.S. inexplicably switched into a five-back and stayed in the formation into the second half. Then, only seven minutes after the halftime break, the Americans conceded again.

On the play, Rose Lavelle lost possession and England quickly took advantage. Tierna Davidson and Crystal Dunn lost track of Nikita Parris on the U.S.’ left side and a perfectly weighted ball over the top found the attacker in behind the American backline.

Franch failed to come out and cut down the angle and then seemed to get caught in between two minds on the shot. Stuck trying to decide whether she should try to get her hand down, or attempt a kick save on the low, driven effort, she ultimately did neither. The shot tucked nicely into the side netting and gave England a 2-1 advantage.

Following the goal, the U.S. switched back to its 4-3-3 and brought Christen Press in to help bolster the attack. As the two teams continued to trade punches, the Americans ultimately found the equalizer.

On a scramble off a corner kick, several shots couldn’t find their way, but Tobin Heath proved to be in the right place at the right time and finally put away the loose ball to tie the match 2-2.

The Americans’ four matches this year have been played against quality sides, with the Americans beating Spain, losing to France, and tying both Japan and now England. However, the team’s defense is clearly struggling and has now given up seven goals in four games while regressing at a rapid rate.

Ultimately, the 4-3-3 that the United States switched into in 2017 is an offense-first formation. And the Americans have all the attacking talent they need with rack up impressive goal totals, even against top-level competition. Still, the team won the 2015 World Cup largely on the strength of its defense—particularly in the early rounds—and will need their backline to step up this summer in France at some point when the offense is sputtering.

At this point, there are no signs that the defense is capable of earning a shutout against a top team.

Ellis, for her part, also needs to stop tinkering with a machine that was running well for nearly two years. A series of tactical and personnel experiments late last year and early in 2019 have not gone well and her mid-game formation switches seem to be confusing her players more than producing anything positive on the field.

For the past two years, the Americans have played well and beaten the world’s top teams. With three months to go until the World Cup, it’s time to stop the experiments, go with what works, and build the cohesion the team will need this summer.