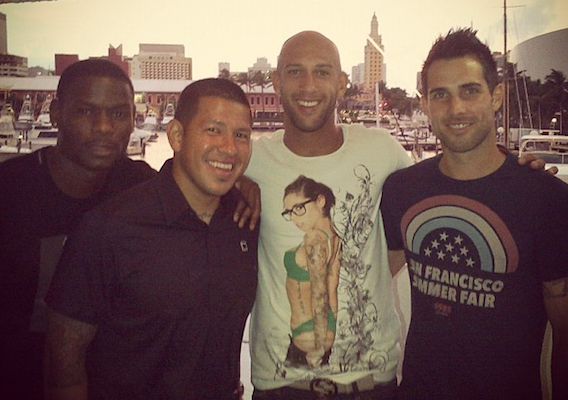 The United States player pool is full of tons of talent. No, not on the soccer field. On Twitter. Jesse Yomtov collects the best tweets of the week for your enjoyment. These guys...
BY Jesse Yomtov Posted
October 12, 2012
11:35 AM
10. Stuart Holden—Sentimental and respectful:

Want 2 wish Owen Coyle the best of luck in the future and thank him for believing in me. Forever grateful 4 the opportunity he gave me #bwfc

Seriously there needs to be a pitcher substitution rule. This is getting ridiculous..

"Excuse me.... Your epidermis is showing."

7. Maurice Edu—Just terrific use of the new iPhone’s panorama feature:

5. Herculez Gomez—Corona and Tijuana teammate Edgar Castillo won’t take too kindly to this one:

@joecorona15 joe, santos vs the puppies is tomorrow, not today bro. #DaleJoe

4. Heath Pearce—“Hoboken” and “pedicure” don’t generally wind up in the same sentence:

Is anyone in Hoboken right now. I'm going to get a pedicure... If you come with me I'll pay for it. Who's in?

3. Zarek Valentin—Interrupting a Duke grad during a VP debate is a big no-no:

Hahahahahahaha I guess @andrewwenger doesn't like me playing guitar during the debate. No need to leave the room man.... #sorrybrah

2. Eddie Johnson—Maybe not even the best photo to come out of the USMNT’s yacht outing...

2a. ...because Carlos Bocanegra's dig at Tim Howard is gold:

I want a hot original glaze from @krispykreme right now. Somebody make it happen and I'll love you forever! Ok thanks bye :)