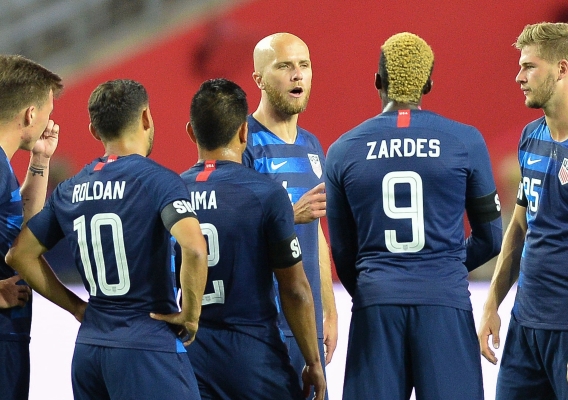 American fans should be ready for a lot of fun games this weekend as the U.S. national team continues on with the Gregg Berhalter-era and several U.S. players should see minutes in big games in the days ahead. Brian Sciaretta previews the 10 best games for American fans to watch.
BY Brian Sciaretta Posted
February 01, 2019
4:20 AM

IT SHOULD BE a fun weekend for American fans as the United States national team plays its second and final game of January camp while it will be a busy couple of days for American players – particularly in the Bundesliga and the English Championship.

Here is a preview for the most notable games on tap from an American perspective.

After a convincing 3-0 win over Panama last Sunday, the competition will be raised on Saturday for the U.S. national team when it faces Costa Rica in San Jose, California.

New manager Gregg Berhalter is still getting familiar with his player pool but it wouldn’t be surprising to see him stick with the players who stood out. Players such as Cristian Roldan, Djordje Mihailovic, Nick Lima, Aaron Long, Walker Zimmerman, and Zack Steffen were among the best players against Panama. But Panama brought a poor team to the friendly and Costa Rica will be more challenging.

A likely scenario is for Berhalter to look at a few different players but also continue to give extended looks to the players he believes are the most likely players to be part of the pool moving forward when the European-based players are included.

There are a lot of things to keep an eye during these first steps of the Berhalter-era. How does he like to use his fullbacks and wingers? Will he continue to use the same formation? Will Michael Bradley continue to see an important role moving forward?

A lot of American players in Europe have had a nice run over the past month but perhaps no one has enjoyed a stronger run of form than Duane Holmes. The Georgia-born attacker has grown into an important role for Derby County in its promotional race to move into the Premier League next season.

Holmes, 24, has won man of the match the last two Derby County games and three times over the last month. He has never been called up to the U.S. national team (or youth national teams) but is striving for his first call-up. With continued strong performances, he will likely force Berhalter’s hand.

DeAndre Yedlin, 25, is coming off one of his best games of the season with a fine showing for Newcastle United in a 2-1 upset over Manchester City. That win went a long way towards helping Newcastle move further away from the relegation zone.

Saturday’s game against Tottenham will be just as challenging as it will take place in London against a team that currently sits in third place in the Premier League. Yedlin will have plenty of motivation as Tottenham was his former club and a place where he never broke into the lineup.

Cameron Carter-Vickers, 21, has had a tough time playing regularly with Swansea City this season. Although due to injuries, he should be able to start leading into the March international window. These upcoming games should be critical for him for many levels.

For one, it will help impress suitors next year as he looks for either another loan, or a full transfer away from his parent club, Tottenham. Second, it will give him momentum heading into the March friendlies for the U.S. national team where he can help impress the new coaching staff.

Seventh place Bristol City will be a big test for 11th place Swansea and Carter-Vickers needs to impress.

Matt Miazga, 23, has walked right into a fierce relegation fight with Reading FC which is currently in the drop zone and but trails Rotherham by just one point for the final safe spot in the Championship. 10th place Aston Villa will be a tough test but Reading will be at home. This game comes on the heels of a heartbreaking 1-1 draw with fellow relegation battlers Bolton where Reading had a lead into second half stoppage time.

These games will be intense and should force Miazga to shake off the rust after not playing much at his previous loan with Nantes.

Tyler Adams, 19, enjoyed an outstanding Bundesliga debut last weekend in a full 90 effort where RB Leipzig dismantled Fortuna Dusseldorf by 4-0 scoreline. With that win, it is fair to expect Leipzig to continue with most of the same starting lineup in what will be a race to finish in the top four in the Bundesliga and continue its grip on a Champions League spot. It currently sits in fourth place and is three points ahead of fifth place Eintracht Frankfurt.

Standing in the way of Leipzig will be Hannover which has been dreadful in recent weeks and sits in the relegation zone with just 11points – tied for the league worst. Despite that, it is only three points from the playoff spot. Bobby Wood did not even make the matchday roster last week, but the club was terrible in a 5-1 loss to Borussia Dortmund. Perhaps that will open the door back up for the U.S. national team forward.

Weston McKennie, 20, should continue to feature for Schalke as it looks to push into midtable of the Bundesliga following a rough start to the season. With seven points from its last three games, Schalke is trending in the right direction and McKennie will return to the team after serving a yellow card suspension. Haji Wright should also dress for Schalke although his minutes are difficult to predict.

Borussia Monchengladbach will be a tough opponent for Schalke as it sits in third place in the Bundesliga and has won its last two games with clean sheet victories. Fabian Johnson has been an occasional bench player for Monchengladbach and could feature on Saturday as well.

That would keep alive the prospect that three Americans could play in this game.

A lot will be on the line on Saturday when seventh place Hertha hosts eighth-place Wolfsburg in Berlin. For U.S. national team central defender John Brooks, it will be a homecoming as Brooks was born and raised in Berlin. He also developed at Hertha and helped it earn promotion to the Bundesliga at the start of his career. He eventually moved to Wolfsburg in what was then a record transfer for an American player.

Hertha and Wolfsburg at tied on points and a win could see it move into the Europa-league spots in the Bundesliga. It’s been quite a rebound for both Brooks on an individual level and Wolfsburg as a team who only narrowly avoided relegation last season via a playoff.

Josh Sargent continues to see a steady roll off the bench for 11th place Werder Bremen but Saturday’s game should offer him a great chance if he gets on the field. Nurnberg has the worst defense in the Bundesliga where it has conceded 43 goals – unsurprisingly, that is why it sits in last place in the league.

If the St. Louis teenager gets on the field, he should have a very good chance to score. With Werder Bremen comfortably in midtable, this would be a great chance for Sargent to start or at least get extended minutes as a substitute.

That will certainly be the case for U.S. national team forward Andrija Novakovich as Fortuna Sittard travels to face Eredivisie leaders PSV Eindhoven on Sunday.

Newly promoted Fortuna Sittard has had a good season so far where it sits in 10th place and is doing well in its push to survive in the Dutch top fight. But scoring goals will be extremely hard against a PSV team which has conceded just 11 goals in 19 games. Coincidentally, one of those 11 goals was scored by Novakovich on August 18 where PSV won a close 2-1 result.

For Novakovich, he has scored four Eredivisie goals and one Dutch cup goal this season while on loan from Reading.